Japan finds luring business from Hong Kong may be tough 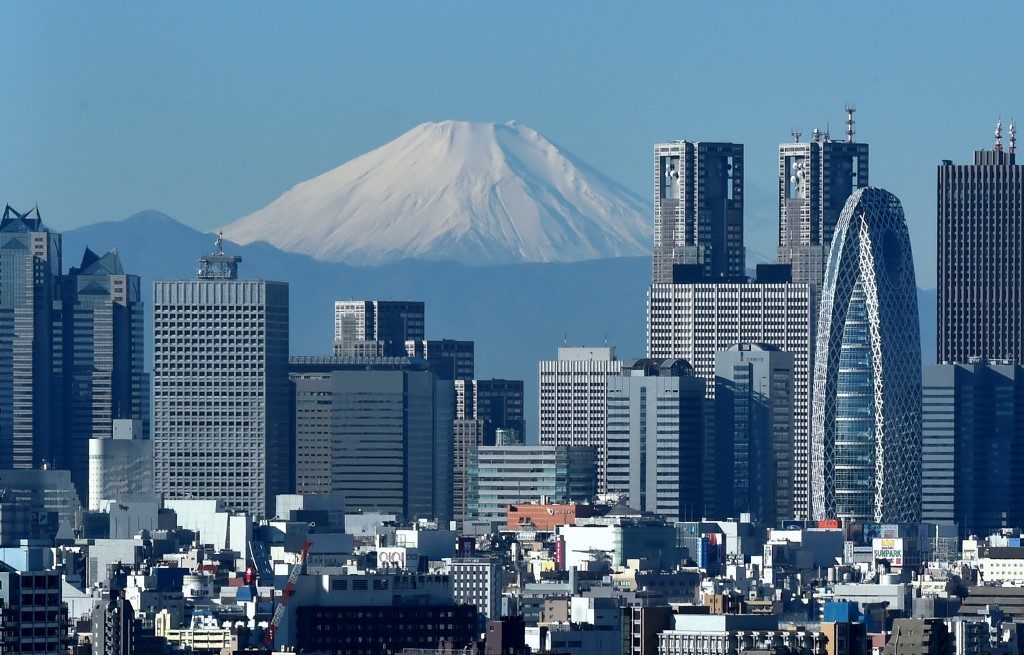 SKYLINE. This file photo, taken on December 6, 2014, shows Japan's highest mountain, Mount Fuji (C), seen in the distance behind the skyline of the Shinjuku area in Tokyo.

Facebook Twitter Copy URL
Copied
In some ways, Japan might seem an obvious alternative for businesses looking to leave Hong Kong. But there are some serious stumbling blocks.

Tokyo is on a charm offensive, hoping to lure firms in Hong Kong spooked by protests and a controversial security law imposed by China. But the city is proving a tough sell.

“I want to make Tokyo Asia’s number one financial city,” Governor Yuriko Koike said in October, as the Japanese capital opened an information center in Hong Kong for international businesses considering a move.

Tokyo’s courtship comes with some concrete promises, including temporary office space in the city for foreign financial firms that want to try out life in Japan.

There are also a number of more theoretical incentives being floated, including tax breaks, streamlined bureaucracy, and even a special economic zone like Shenzhen, China’s Silicon Valley.

In some ways, Japan might seem an obvious alternative for businesses looking to leave Hong Kong: it is the world’s 3rd largest economy, home to the Tokyo Stock Exchange, and already houses outposts of numerous financial institutions and international firms.

But there are some serious stumbling blocks, and competitors, that experts say mean Tokyo’s hopes for regional financial dominance may be little more than a pipe dream.

For a start, Japan’s income taxes are sky high, comparatively, topping out at 45% against Singapore’s 22% and Hong Kong’s 17%.

Low English fluency levels are also a chronic handicap, as is the country’s comparatively sluggish adoption of digital technology.

Trade on Tokyo’s stock markets was halted for an entire day last month because of a “hardware failure” – a glitch seen as unlikely to boost confidence and bring new traders flocking.

But “there’s also a lot of skepticism because there haven’t been a lot of changes” over the years when similar initiatives have been proposed, he added.

Japan’s particularly strict approach to border control during the pandemic – for months foreign residents were not allowed to return even as Japanese citizens did – has been seen by some as “discrimination” and could also be off-putting for tentative transplants, added Mroczek.

Tokyo is also not the only Asian city seeking to take advantage of a potential Hong Kong exodus.

Australia has announced new visa opportunities for Hong Kong students and entrepreneurs, and officials have said they will be “very proactive” in encouraging businesses to relocate.

And while Singapore’s government officially says only that it seeks a “stable, calm, and prosperous” Hong Kong, it is probably the most obvious alternative for firms, said Rajiv Biswas, Asia-Pacific chief economist at consultants IHS Markit.

“Most international financial services firms may already have a large presence in Singapore, and therefore may prefer to expand their existing operations in Singapore rather than finding another new location,” he told Agence France-Presse (AFP).

There are still questions, though, about whether an exodus from Hong Kong is really on the cards, whichever regional city stands to gain.

“I wouldn’t expect big firms to announce that they are pulling out of Hong Kong completely,” Mark Williams, chief Asia economist at Capital Economics, told AFP.

“It’s more likely that firms will just gradually reduce their headcount in Hong Kong and increase it elsewhere.”

Since 2014, the Hong Kong stock exchange has been directly connected to Shanghai’s, allowing companies based in Hong Kong to invest in listed Chinese companies more easily.

And Hong Kong’s proximity to Shenzhen is another important plus for some businesses.

“Wait and see is the general attitude,” one expat employee at a major Western bank in Hong Kong told AFP on condition of anonymity, adding he personally was not yet thinking about relocating.

Innes said regional hubs like Singapore might also fear China’s wrath if they seek to siphon off business.

No one “in the region wants to bite the hand that feeds,” he said.

“It is way too early to write Hong Kong off.” – Rappler.com