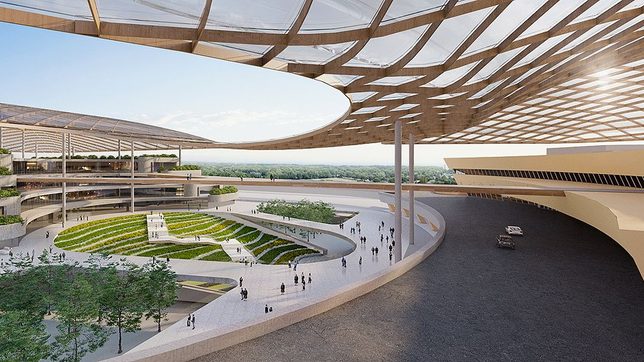 Megawide-GMR’s P109-billion unsolicited proposal promises a world-class main gateway for the Philippines and a design inspired by local landscape. This time, their peg is the Banaue Rice Terraces, which is dubbed the Eighth Wonder of the World.

The joint venture, current holder of the original proponent status for the NAIA rehabilitation project, unveiled its plans for the airport in a press briefing on Monday, November 16.

Megawide-GMR pledged to build a new passenger terminal building and new taxiways, which would be constructed between NAIA Terminals 1 and 2.

It also wants to include a bus rapid transit for the airport and an elevated railway linking the terminals.

If the project is indeed awarded to Megawide-GMR, the concession agreement would last for 25 years.

Winston Shu, the architect who worked on MCIA, was again tapped by Megawide-GMR for the NAIA rehabilitation project.

The idea is to bring the outside in, by adding greenery and letting natural light flow into the huge block of concrete that is NAIA.

With the proposed NAIA Green Valley, Shu imagines NAIA Terminal 1 not just as an airport, but also an area where people can mingle and do other activities. The concept is akin to Singapore’s Jewel Changi Airport, which became a tourist destination of its own.

“We want to build a connection – not just physical but also for visual clarity. You’ll know where to go naturally without relying on signages,” said Shu.

For Shu, it’s all about passenger experience.

“We’ll turn that space into a plaza with landscaping where people can eat and drink and still be protected by a canopy and still enjoy the natural light with air moving naturally,” said Shu.

“We want it to feel like a much bigger place than it already is,” he added.

While there are a lot of grand ideas for the airport, Megawide executives said the existing facilities designed by National Artist for Architecture Leandro Locsin would be preserved.

The first phase of the unsolicited proposal would focus on immediate improvements to reduce flight delays.

Andrew Harrison, chief executive advisor of GMR-Megawide Cebu Airport Corporation, said the objective is to make sure that flights will no longer be delayed.

To achieve this, Harrison explained that operating on a single runway would be more efficient, increasing the number of aircraft taking off and landing at the airport.

“We want to fix that problem immediately by making the experience of passengers a good experience. When we go back to the 45 to 47 million [passenger] traffic, we will solve the problems of delays by improving the processes,” he said.

The construction of the new terminal building and improvements on taxilanes would be done during the second phase of the plan.

The third phase of the rehabilitation project would involve mainly the construction of the elevated railway.

Operations-wise, Megawide-GMR plans to absorb NAIA employees if the joint venture gets the project award.

The National Economic and Development Authority (NEDA) has yet to green-light the project. Once the NEDA Board gives its approval, Megawide said the government can finally move forward with the Swiss challenge in the 1st quarter of 2021, when other firms can make competing offers.

Being the original proponent, Megawide-GMR has the right to match competing offers during the Swiss challenge.

Megawide executives said the first two phases – which are expected to take 10 years – amount to P20 billion and could be funded by the firm alone.

According to Megawide chief branding and corporate affairs officer Louie Ferrer, financial requirements sought by NEDA “will be submitted within the week.”

Allaying concerns over the company’s financial capability, Saavedra said investors and lenders are “very excited” for the firm to push through with the project. On Monday, Megawide shares were up by 7.89% after the NAIA modernization plan announcement.

“A lot of them are very excited and even pushing us to get this project. We are very confident that we can get the funding for this project,” said Saavedra.

“I think the most critical part is the approval of this project. Once it gets approved by NEDA, then the next will be more procedural – [the] Swiss challenge and award,” he added.

Previously, lawmakers and groups questioned whether Megawide-GMR would be able to fund the project and suggested that the Manila International Airport Authority undertake the modernization plan instead. – Rappler.com