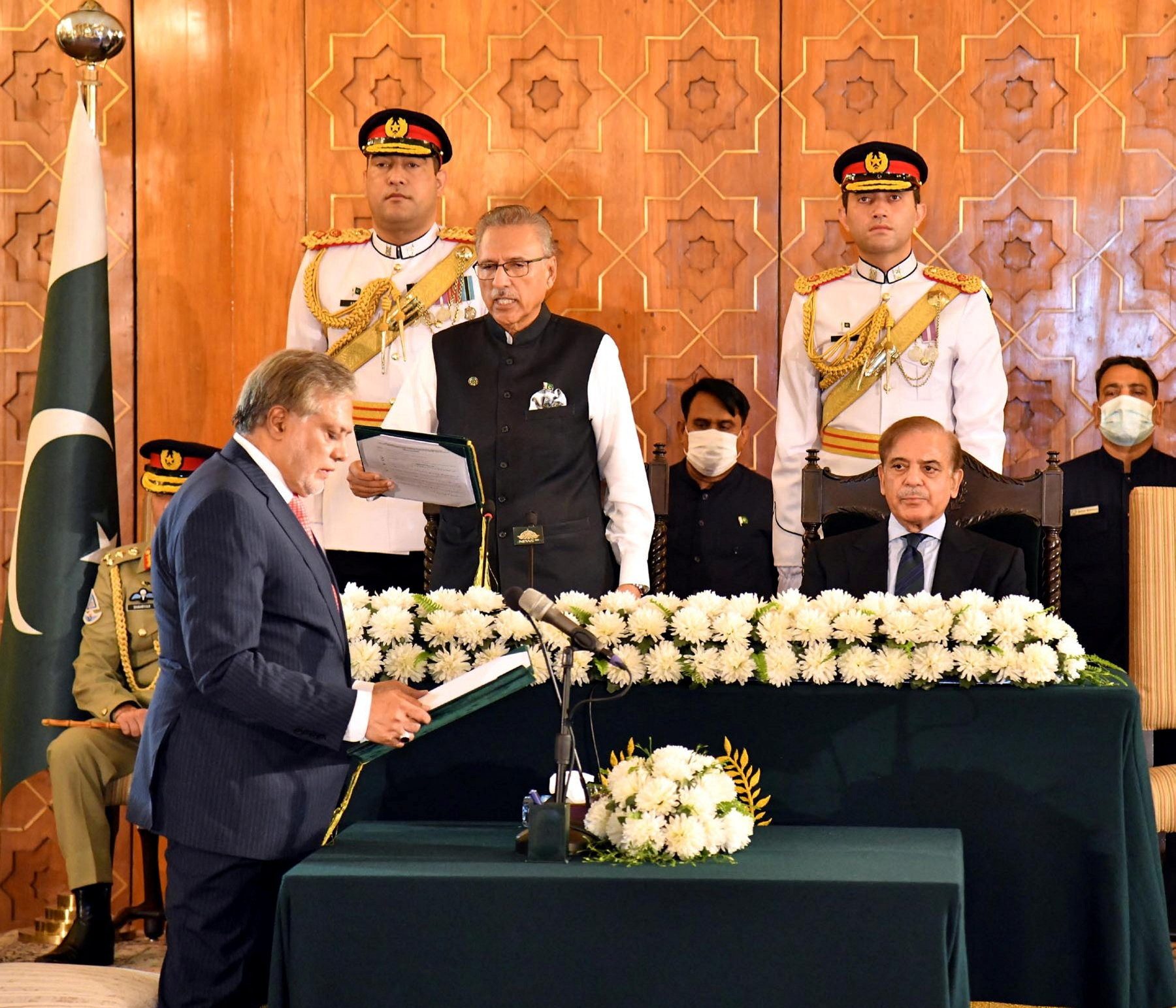 In his fourth time in the job, the chartered accountant is facing a balance of payment crisis, foreign reserves that cover barely a month’s imports, historic lows in the rupee, inflation exceeding 27%, and the aftermath of devastating floods.

“We will control inflation,” Dar told reporters in televised comments after he was sworn in.

“We will bring interest rates down,” he said. He did not explain how he would tame price pressures while also cutting rates.

Dar also had a warning for currency market speculators, saying that the Pakistani rupee was undervalued. It has weakened more than 30% against the US dollar so far this year.

“Our currency right now is not at the place where it should be, it is undervalued,” said Dar, who is known to favor currency market intervention to keep the rupee stable.

“I hope the speculators will stop. I think they have already got it and we are seeing the rupee rising,” he added. “No one will be allowed to play with the Pakistani currency.”

Shorter-dated issues suffered the biggest decline, with the 2024 bond bid at 40.2 cents on the dollar, according to Tradeweb data. Bonds due in 2025 and 2027 fell just over 4 cents while longer-dated maturities were bid at just over 36.6 cents in the dollar.

The premium demanded by investors to hold the bonds blew out to record levels, with the sovereign spread over US Treasuries widening to 2,442 basis points on the JPMorgan EMBI Global Diversified index.

“We thought even before this (the huge floods) that there was a high likelihood of a debt restructuring so the way I would put it is that likelihood is now significantly higher,” said Carl Ross, a partner at investment firm GMO.

“The numbers being talked about, 10% of GDP (gross domestic product) or so in damages, that is probably going to require burden sharing across a lot of different stakeholders.”

A member of parliament’s upper house, Dar got the job after his predecessor, Miftah Ismail, became the fifth to quit the post in less than four years, amid persistent economic turbulence.

The rupee has been gaining firmly ahead of his appointment and stocks responded positively before Wednesday’s swearing-in.

Dar, a senior politician in the ruling party of Prime Minister Shehbaz Sharif, flew to Islamabad on Monday night, September 26, after ending five years in self-exile in London.

In 2017, he had been facing corruption charges he says were politically motivated, but last week an anti-graft court suspended warrants for his arrest, enabling his return.

On Wednesday, the court extended the suspensions.

“I told the court that my passport was revoked,” Dar said.

“I wasn’t able to travel for the last four years,” he added, describing the legal action against him as political victimization by the previous government of Prime Minister Imran Khan. Khan’s party denies this.

Analysts say Dar’s key mandate is to halt inflation that mainly stems from his predecessor’s unpopular decisions to stick to preconditions set by the International Monetary Fund (IMF), including rolling back subsidies made by Khan’s government.

Sharif’s coalition government says it inherited a wrecked economy after Khan’s ouster in a vote of no-confidence in April, a charge the former premier denies.

As the new government took over, the IMF’s $6-billion bailout package agreed in 2019 was in question because of the lack of an agreed policy framework.

Last month, the IMF board approved the program’s seventh and eighth reviews, allowing the release of more than $1.1 billion in funding assistance.

Former finance minister Ismail had said the tranche was likely to be increased after Pakistan sought help to remedy economic losses of an estimated $30 billion caused by the unprecedented floods.

The disaster could cut economic growth to below 3%, from 5% estimated for fiscal 2022-2023, the government has said. – Rappler.com