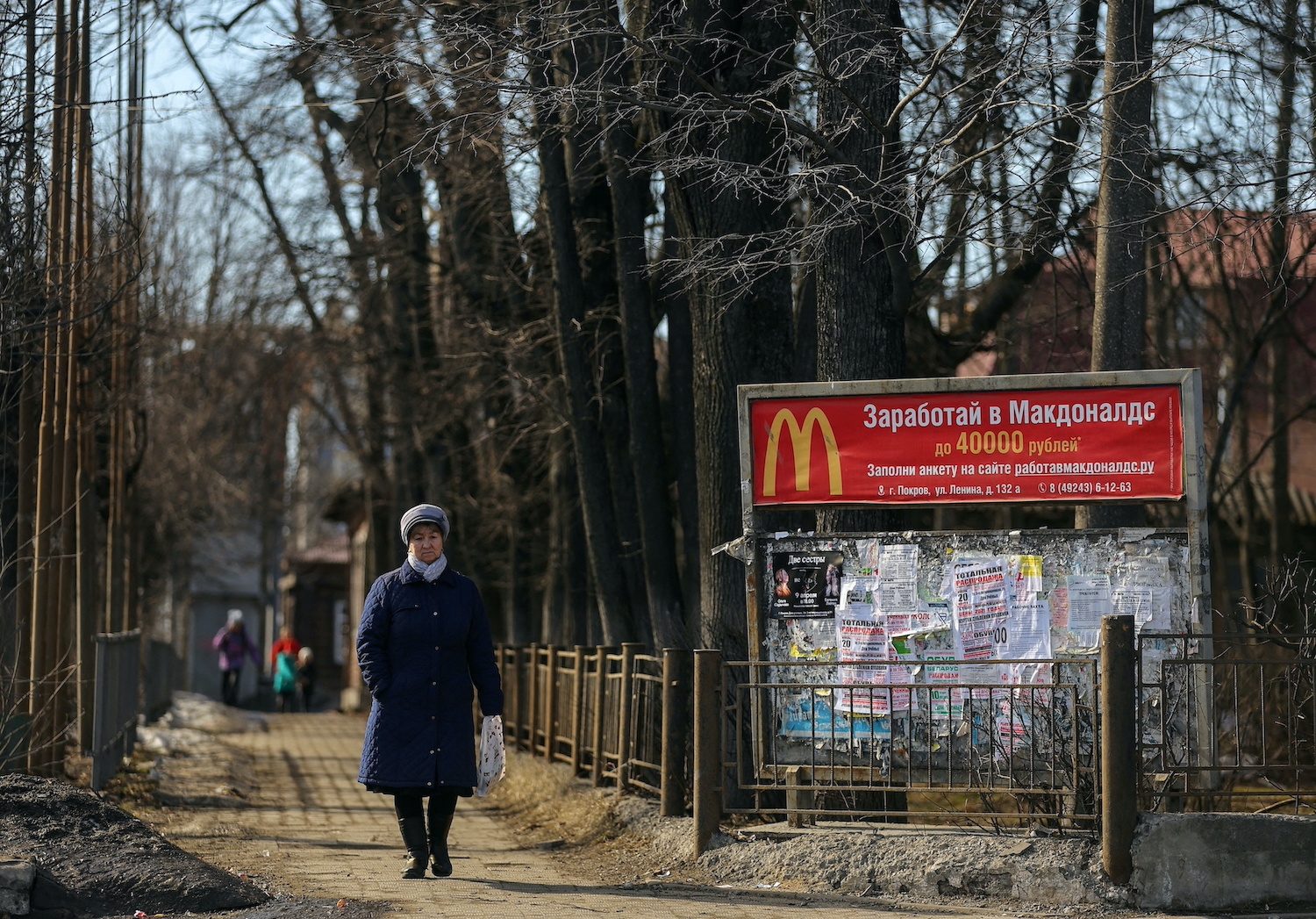 POKROV. A woman walks along a street past a banner offering jobs at McDonald's in the town of Pokrov in Vladimir, Russia, March 21, 2022.

In the Russian town of Pokrov, sugar has sold out in many stores and residents expect some goods to become unaffordable as Western sanctions over Moscow’s invasion of Ukraine take hold.

Facing its gravest economic crisis for more than 20 years, Moscow has been telling citizens there is no lack of food and urging them not to panic-buy staples like sugar and buckwheat.

That message seems to have fallen on deaf ears, however, in Pokrov, a town of 17,000 people located 100 kilometers (60 miles) east of Moscow that is home to the prison colony holding Alexei Navalny, President Vladimir Putin’s fiercest critic.

One resident, Svetlana, purchased 10 kilograms (22 lbs) of sugar in the city of Vladimir, an hour away, to make sure she could preserve the berries she plans to collect this summer.

“Maybe the price of sugar won’t go up, but people are afraid,” the 57-year-old said. “That’s probably why everyone is buying some.”

Behind her was a closed McDonald’s restaurant, one of the many Western outlets shut in response to the intervention.

Four grocery stores belonging to two major chains in Pokrov had no sugar on sale, the shelves either empty or filled with other items. Signs told customers they could buy no more than 5 kilograms of sugar.

Antonina, a 71-year-old pensioner bundled up in a purple winter coat and a felt hat, lives on her own in Pokrov. She said her state pension was enough to cover her basic needs but that she expected to have to change her eating habits: “I probably won’t be able to buy fruit for some time.”

Russia sent its army into Ukraine on February 24 in what it called a special operation to degrade its neighbor’s military capabilities and root out people it called dangerous nationalists.

Ukrainian forces have mounted stiff resistance and the West imposed sanctions in an effort to force Russia to withdraw.

Larisa, another resident, said she had witnessed enough upheaval in her lifetime to be undaunted by having to tighten her belt.

“I was born in the Soviet era,” she said. “Then there was [Mikhail Gorbachev’s] perestroika, then the 1990s, food stamps. We got through it all.”

Another citizen, limping down the street with a cane and a medical mask dangling below her nose, was equally philosophical.