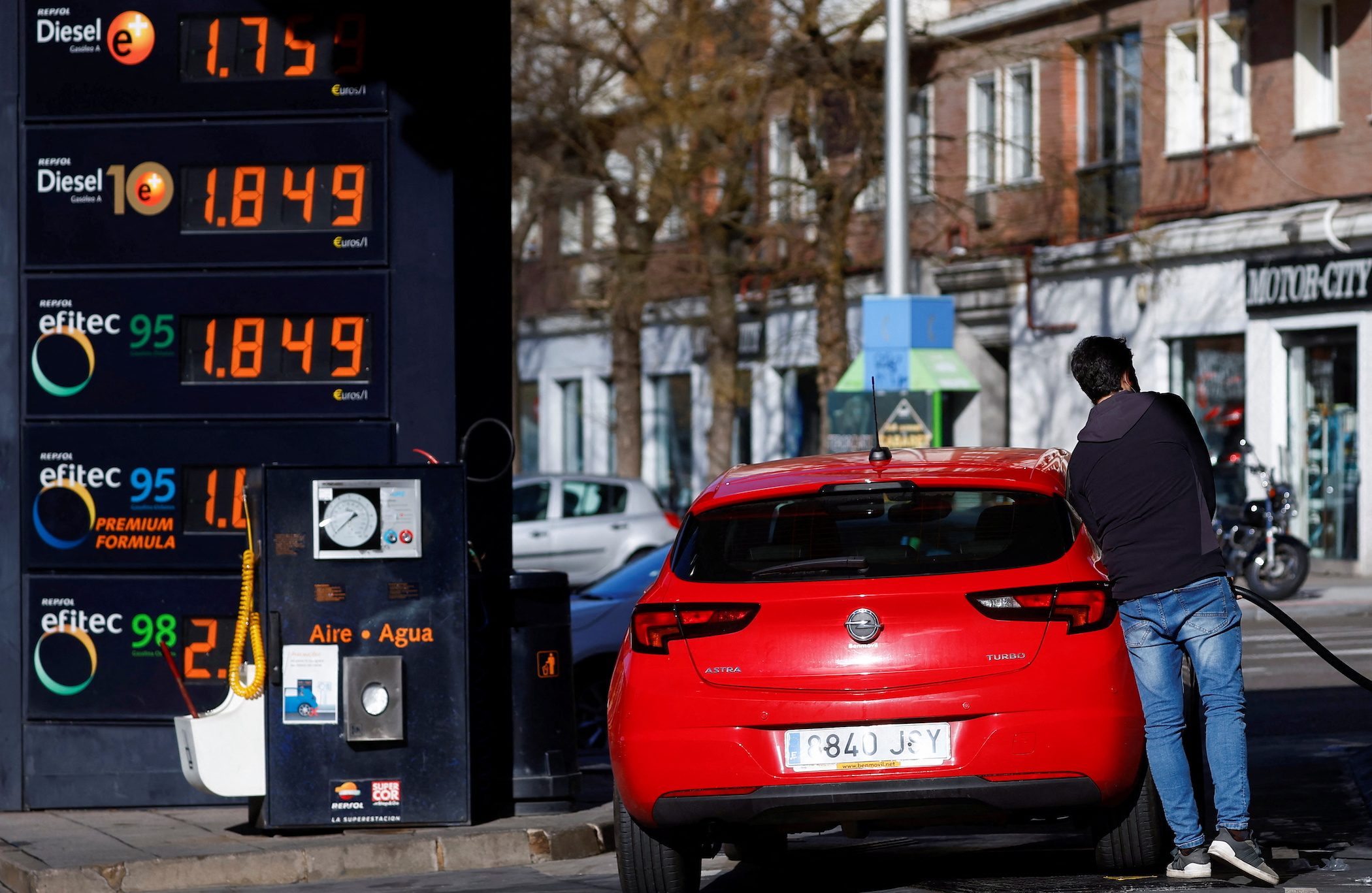 INFLATION. A man fills fuel at a service station during a significant increase in the price of energy in Madrid, Spain, March 8, 2022.

Already struggling with rising living costs, Europeans now face an even deeper hit to their livelihoods as the conflict in Ukraine pushes fuel and food prices higher and threatens to undermine a fragile economic recovery.

The surging price of crude oil on world markets has led to the biggest ever weekly jump in gasoline prices at some service stations around Europe, pushing them in some cases above 2 euros for a liter ($8.25 per gallon) of unleaded fuel.

“The problem is not the price it will be tomorrow, but how much it (gasoline) will cost 15 days from now, we think that it is going to cost much more. I think bad times are ahead of us,” 76-year-old Madrid pensioner Alejandro Oterino said.

That fear of prices spiraling out of control is precisely what the European Central Bank must allay at its meeting on Thursday, March 10. ECB chief Christine Lagarde will aim to prove it can keep a lid on euro-area inflation that had already leapt to a higher than expected 5.8% ahead of Russia’s invasion of Ukraine.

“There is a natural pressure on central banks to keep [inflation] expectations low via communication but at the same time they risk losing credibility,” said Gunther Schnabl, economics professor at Leipzig University.

In Portugal – western Europe’s poorest country with 10% of the population on a minimum wage of 705 euros – motorists have been rushing to fill tanks before any more price hikes come in. A diesel car with a 50-liter tank costs 91 euros to fill up.

“If the prices keep rising, I might have to resort to social services to eat and drink,” said 56-year-old Uber driver Antonio Dias in Lisbon.

“If this continues it will not make sense to continue doing this type of work,” he said, urging the government to cut fuel taxes which currently amount to some 50% of gasoline end-prices.

Knock-on impacts are being felt already. Teresa Soares, who sells food products to restaurants in the Portuguese capital, said she had no alternative to her car for making deliveries, so would just have to shoulder the extra cost on her business.

“If this was my private car, I would probably put it aside and not drive it,” said Soares, 53.

German motoring organization ADAC estimated that diesel prices had spiked a massive 28% in six days from March 1. Heating oil prices are also rising as homeowners are stepping up purchases of the oil, still used by many Germans to heat their houses.

“Many users fear supply bottlenecks due to the war between Russia and Ukraine and are now filling their [heating oil] tanks while we are still in winter, which they usually don’t do,” it said.

For now, increases in the end-prices of food have been less dramatic. But with Ukraine and Russia both exporters of grain, and Russia a major supplier of fertilizers, concern is growing that this will add to inflationary pressures as the war goes on.

Some Spanish supermarkets including market leader Mercadona are restricting sales of sunflower oil, which mostly comes from Ukraine, after detecting what the ASEDAS supermarket sector body called “atypical consumer behavior.”

Spain’s agriculture ministry urged calm and said there were no shortages for now.

The fear now is that this will hit consumer spending even harder, especially among the low-income households who fared worst during pandemic lockdowns in which they did not benefit from furloughs or faced other hits to their livelihoods.

In Britain, the Resolution Foundation think tank estimated the conflict would lead to wider inflation, shaving 4% off the real level of typical household incomes over the coming year, the sharpest fall in nearly half a century.

Italy’s economy ministry said in a report on Monday, March 7, that “the surge in energy prices and the consequent rise in inflation represent a strong risk for citizens’ economic well-being.”

This is all raising the specter of “stagflation,” the combination of inflation and economic slowdown commonly associated with the early 1970s and which central banks and governments find so difficult to cure.

In light of the conflict, ECB policymakers are tussling over whether to pause moves to wind down the unprecedented amount of stimulus they have used to prop up the euro economy over the past decade – a period in which the eurozone slowly emerged from a global recession only to land up in a new pandemic-era collapse.

University of Leipzig’s Schnabl said that with governments now inevitably having to pump more support into the economy to help the worst-hit, the only way to avoid a vicious circle of more inflation was for the bank to pursue its tightening path.

“The very important policy consequence from my point of view is to stop central bank-financed government expenditure,” he said. “And that will only work based on a very slow but really decisive monetary policy tightening process.” – Rappler.com