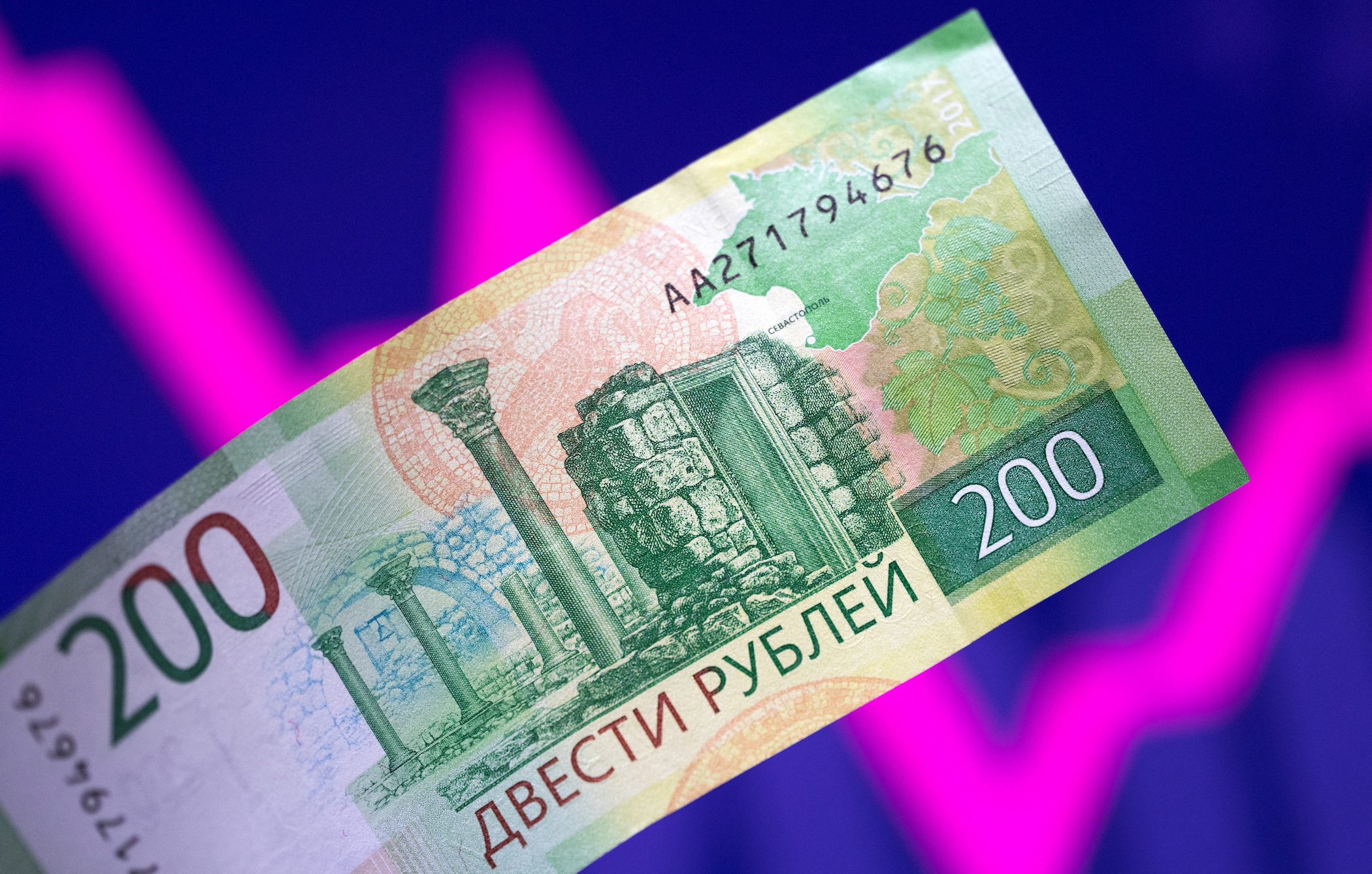 STOCK MARKET. A Russian rouble banknote is seen in front of a descending and rising stock graph in this illustration taken March 1, 2022.

The Russian central bank said on Wednesday, March 23, that some stock market trading would resume on Thursday, March 24, after a near monthlong hiatus, with 33 securities to be traded on the Moscow Exchange for a limited time and with short selling banned.

Trading in blue chips, including state lenders Sberbank and VTB and energy majors Rosneft and Gazprom, will take place between 0650 and 1100 GMT, the central bank said.

Russian stocks last traded on the Moscow Exchange on February 25. The central bank then curbed trading as Western sanctions over events in Ukraine threw markets into turmoil.

Trading of OFZ government bonds restarted on Monday, March 21, with the central buying OFZ papers in an effort to limit volatility. The return of equities trading has taken longer as the bank seeks ways to clear a backlog of transactions while avoiding a market collapse.

Yields on some OFZs, including benchmark 10-year treasury bonds, spiked to almost 20%, or the level of the central bank’s benchmark interest rate, on Monday, before settling between 14% and 17% in subsequent days.

Volatility has left some players exposed to losses, according to Univer Capital, a mid-sized Russian brokerage, and which on Monday faced a mandatory sale of OFZs it held on behalf of its clients by Russia’s National Clearing Center (NCC).

Artyom Tuzov, executive director in the capital markets department at Univer Capital, said falling OFZ prices, which move inversely to yields, triggered margin calls and a liquidity shortage at the brokerage as a result.

“NCC has blocked the company’s trading limit and…is selling [our OFZ] assets as a result. The trading limit will be unblocked after [mandatory] sale is over,” Tuzov told Reuters.

NCC was selling OFZs held by Univer Capital at yields of between 17% and 20% versus 15% on average on the market that day, according to an internal Univer Capital memo seen by Reuters and confirmed by Tuzov.

As a result, nearly a hundred of Univer’s clients faced combined losses of 174 million roubles ($1.7 million), the memo said.

“All operations by NCC are aimed at limiting systematic risks so issues of a single brokerage do not spill over on the overall market,” the Moscow Exchange, parent company for NCC, said in a statement.

Once the stock market reopens, Univer clients may face similar mandatory sales, Tuzov says, as he expects shares to fall the same as OFZ prices did: “losses are unavoidable.”

Unlike banks which are supported by the central bank via repo auctions with trillions of roubles on offer, brokerages have no access to state funds to replenish liquidity, Alexei Timofeyev, head of Russian stock market lobby NAUFOR, said.

“Unfortunately, the repo mechanism for brokerages and which was developed [by the central bank] after 2008 did not come into force which puts brokerages who are not part of larger banking groups in a worse position compared with lenders,” he said.

Finam, another large Russian brokerage, said that a small number of its clients also faced margin calls after the OFZ market reopened but the brokerage had “enough liquidity.”

Aton, another major Russian brokerage firm, said it did not face margin calls and is well-covered by liquidity.

“Consequences from the trade opening on all instruments is slightly unpredictable, so we have a large liquidity cover,” Aton said in a statement to Reuters.

Trading on the derivatives market with contracts on Moscow Exchange and individual shares, included on the Moscow Exchange index, will take place from 10 am to 2 pm (0700 to 1100 GMT) in the usual format, the central bank said on Wednesday.

It said the trading regime for subsequent days would be announced at a later date. – Rappler.com