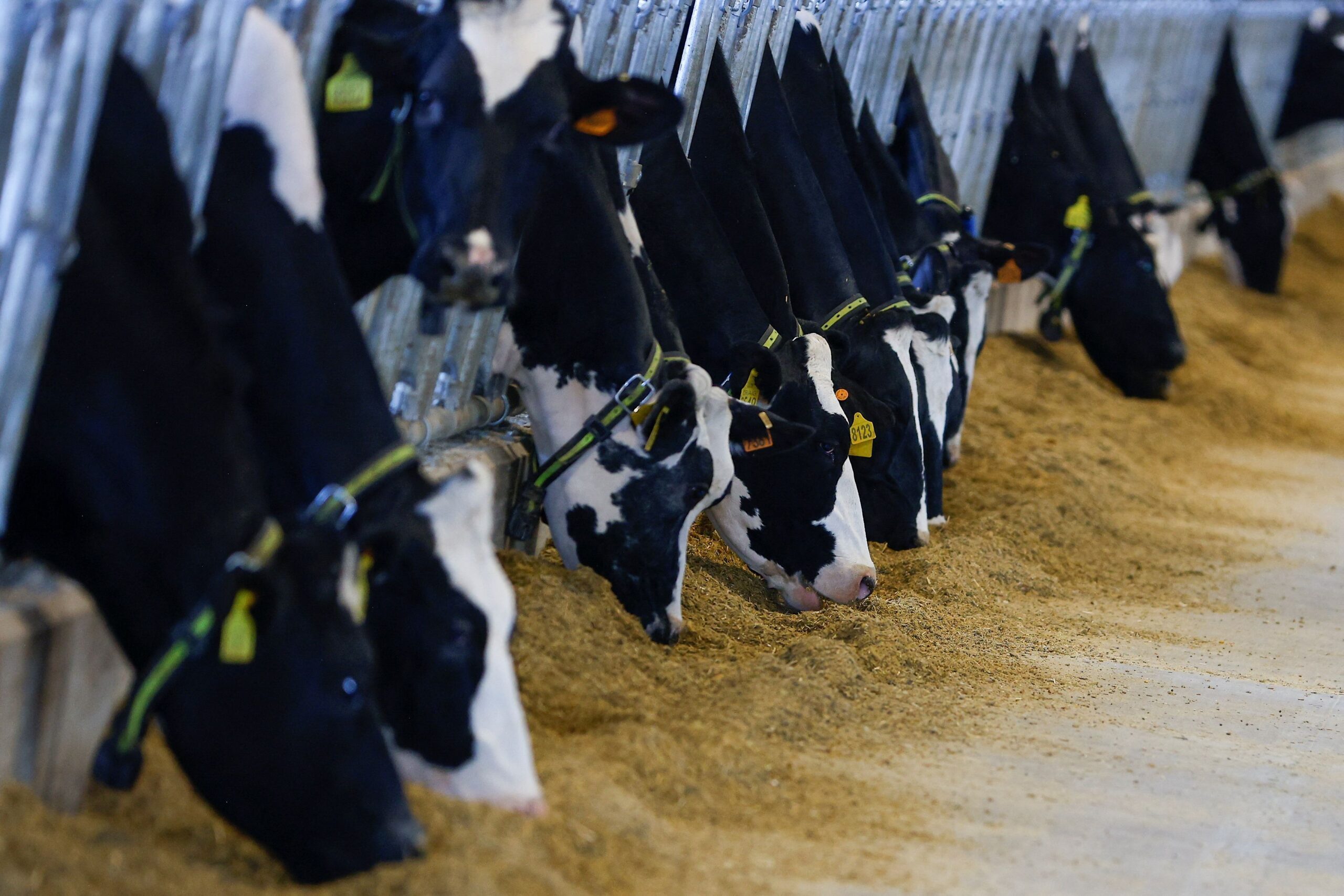 LIVESTOCK. Cows stick their heads out of a pen to eat feed at the Cirio Agricola farm in Piana di Monte Verna, Italy, March 16, 2022.

ROME, Italy – Carlo Vittorio Ferrari, who runs a farm holding 2,000 pigs with his brother near the town of Cremona in northern Italy, fears his fourth-generation family business could be lost due to conflict in Ukraine.

The country is a major global supplier of animal feed, stocks of which are falling fast across import-reliant southern Europe.

With Hungary, Serbia, and Moldova also banning exports as they safeguard their own supplies, costs for farms like Ferrari’s have spiked, threatening their future. Many face culling animals if the situation doesn’t improve quickly.

“This is a family business. My grandfather kept it going during two wars, my dad saw one, but I don’t know if we’ll get through this one,” Ferrari said.

Italy has called for European Union rules limiting state aid to the sector to be waived, while Spain has taken steps to allow emergency purchases of corn from Argentina and Brazil.

“I hear growing reports of farmers slaughtering their animals, but I want to avoid that,” said Elisabetta Quaini, who keeps 1,300 cows for beef and milk production on her farm in Lombardy, northern Italy. “I’m determined to keep going, but I am very worried.”

“It’s not just corn, it’s also soya and numerous by-products that are hard to find. There is a tremendous fight to get hold of what is available.”

Michele Liverini, vice president of livestock feed producer Mangimi Liverini, said if dairy cows were slaughtered it would take seven to eight years to build up a barn to produce milk again.

Ukraine is among the world’s top four corn exporters, and the closure of its ports due to the conflict has had a major impact on shipments.

“The problem is that we now have a perfect storm. When the Ukrainian exports stopped, countries like Moldova, Serbia, and Hungary tried to stop exporting as a protectionist step and we found ourselves with a big problem in our ports,” Liverini said.

“In Italian ports, where ships from these countries arrive every week, there is only a 25-day supply left.”

Spain has the largest livestock herd in the European Union with about 58.8 million head, according to the EU data for 2021 covering pigs, cows, sheep, and goats. Italy has the fourth largest with about 22.5 million head.

Pietro Fusco, chief executive of Cirio Agricola, a milk producer with two farms based near Benevento, southern Italy, said the sector was already stressed after struggling for two years through the COVID-19 pandemic.

He said they were considering giving the herd less feed as a first step, but may eventually be forced to slaughter some of the animals to keep the farm going and protect jobs and families.

“There is also a problem with transport and therefore the impossibility of having supplies on time,” he said.

Maize, or corn, futures on Paris-based Euronext rose to a record 420 euros a ton earlier this month, up about 50% since Russia’s invasion of Ukraine.

Feed stocks have also become depleted in Spain, a major customer of Ukraine.

Agustin de Prada, manager of Spain’s ranchers association Asoprovac in Castile and Leon, said the rise in costs had been brutal and raised questions about the viability of farms.

“When I sell the animals, will I put new ones in? Well, maybe not, because I can’t, the maths doesn’t work out.”

Producers argue that for them to survive, consumers must pay higher prices for products like meat, milk, and eggs, further fueling food inflation, which has become a major problem across the globe since the COVID-19 pandemic began.

Emilio Rial, director of the Coren group, a huge farmers’ cooperative in Spain, said the cost of basic food production had jumped 40%.

“We will try not to pass it all on to the consumer by negotiating with the big supermarkets, but prices will inevitably rise,” he said. – Rappler.com