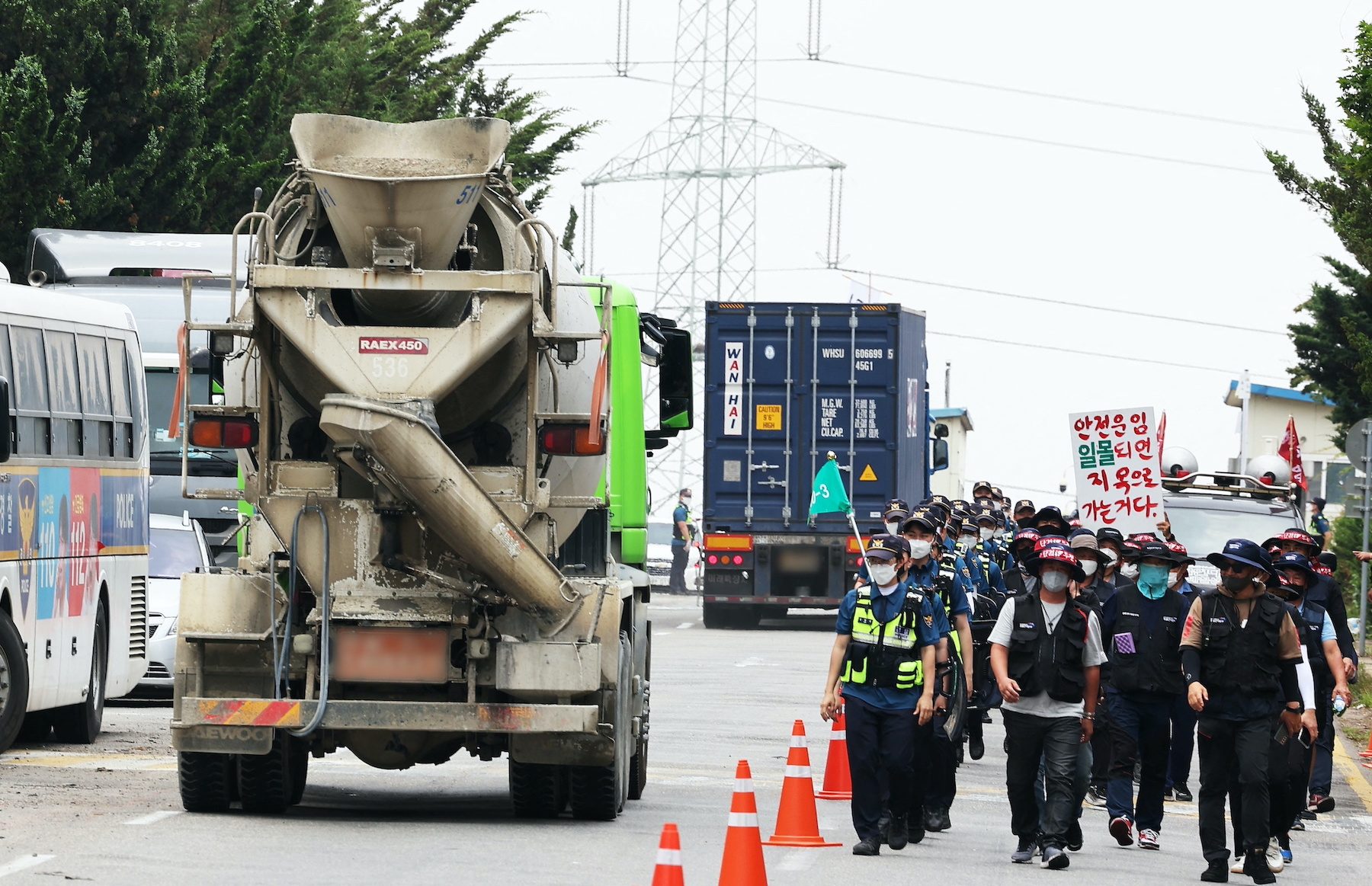 But the group of aging drivers are often seen as outliers in the country’s combative and politicized industrial landscape and their success may not be a harbinger of any wider labor market peace, experts say.

The Cargo Truckers Solidarity is not a recognized union, a reason the government cited initially for its reluctance to sit down to negotiate over demands for minimum freight rates and subsidies to offset soaring fuel prices.

Still, in just eight days of a walkout, the truckers managed to hit key industrial hubs and seaports, crippling the movement of finished cars, steel, and petrochemical products.

While the strike cost Asia’s fourth largest economy more than $1.2 billion in lost production and failed deliveries, the truckers avoided blocking roads or holding violent rallies that might have angered a public weary of demands by unionists who are better compensated than non-union peers and small business owners.

“The labor came to learn that physical conflict was not the answer, and so a gentler strike is becoming a standard practice,” said Kim Dong-won, management professor at Korea University. “The union has to look at public opinion, too.”

Chung-Ang University professor Lee Byoung-Hoon, who specializes in work and labor relations, said the truckers have learned to be effective through previous strikes.

“They have learned that opportunity cost of strikes could be colossal, leading to arrest of union leadership, financial damages union members have to suffer.”

Thousands of truckers headed back on the roads on Wednesday, June 15, after the union and the government reached a late-night agreement to end an eight-day strike.

That was in stark contrast to the country’s history of often violent industrial disputes, characterized by street clashes between police in heavy riot gear and militant union members blockading industrial sites.

There was no independent opinion poll published on the strike which started on June 7 over demands including an extension of a minimum fare system, but local media has been largely neutral toward the dispute.

With diesel prices rising 40% year to date to a record high, truckers’ demands for higher pay appeared to meet with more public sympathy than they might have in the past.

“As a former prosecutor general, President Yoon Suk-yeol has emphasized the rule of law, and by that, he is sending a message that he will not crack down on strikes as long as they don’t violate the law,” said Lim Tae-jun, police science professor at Dongguk University.

The Cargo Truckers Solidarity also managed to avoid public criticism for being political as its powerful umbrella group, the Korean Confederation of Trade Unions, stayed away from the dispute.

But experts say it does not signal a fundamental shift away from the politicized and still militant elements in South Korea’s industrial scene.

Several big-ticket reform plans have been proposed by Yoon, including reforming the National Pension System, employment regulations, and other pro-business agenda.

“With unresolved labor issues and the government’s rather strong stance towards unions, conflicts between unions and the Yoon administration would likely escalate, or set to escalate as time pass, because now that unions have the ‘proper’ environment for strikes and demonstrations,” labor law specialist Park Ji-soon at Korea University’s School of Law said.

Unions are likely gearing up for a fight given Yoon’s agenda, said Yoon Tae-gon, political analyst running consulting company The Moa. “And it’s going to be all the more so as we are living in a time of difficulty economically.” – Rappler.com