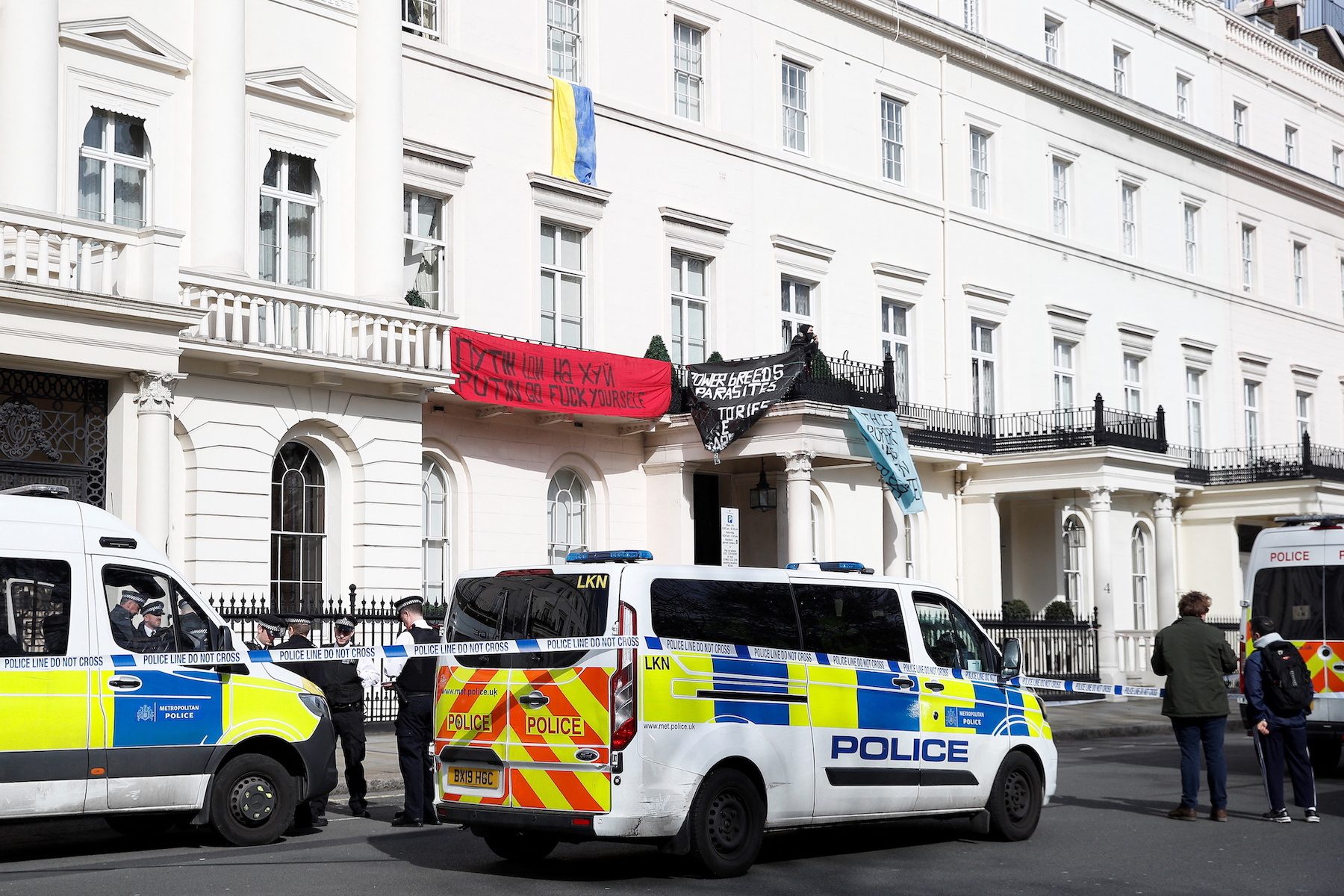 LONDON, United Kingdom – Squatters have occupied the London mansion believed to belong to Russian billionaire Oleg Deripaska, who was placed on Britain’s sanctions list last week, unfurling a Ukrainian flag and a banner saying “This property has been liberated.”

Police said they were called in the early hours of Monday, March 14, after it was reported that the squatters had entered the multimillion-pound mansion in Belgrave Square, in an upmarket area of the British capital which is home to numerous foreign embassies.

“By occupying this mansion, we want to show solidarity with the people of Ukraine, but also the people of Russia who never agreed to this madness,” said a statement from squatters, who described themselves as anarchists.

“You occupy Ukraine, we occupy you,” the statement said.

A number of people gained entry and hung banners from upstairs windows, the police said in a statement. The police did not say who reported the incident.

Britain froze the assets of Deripaska last Thursday, March 10, one of a number of Russian oligarchs targeted in the wake of Russia’s invasion of Ukraine, which the Kremlin has called a “special military operation.”

Deripaska, who has stakes in En+ Group, a major extractives and energy company which owns UC Rusal, one of the world’s major aluminum producers, is worth an estimated 2 billion pounds and has a multimillion-pound property portfolio in Britain, the British government said at the time.

Britain says Deripaska is closely associated with the government of Russia and Russian President Vladimir Putin.

London High Court documents from 2007 identified Deripaska as the beneficial owner of the Belgrave Square mansion. A judge in a court case the year before said the property and another house he owned outside the capital were then worth about 40 million pounds ($52 million).

Representatives of Deripaska did not immediately respond to a request for comment. Shortly before the sanctions were imposed, Deripaska said peace was needed as soon as possible in Ukraine and warned that Russia would be different after the conflict.

In their statement, the squatters said the mansion would “serve as a center for refugee support” and that other properties would also be targeted.

Britain has sanctioned around 20 Russian oligarchs, including Roman Abramovich and Alisher Usmanov, freezing their properties across London and banning them from coming to Britain. – Rappler.com