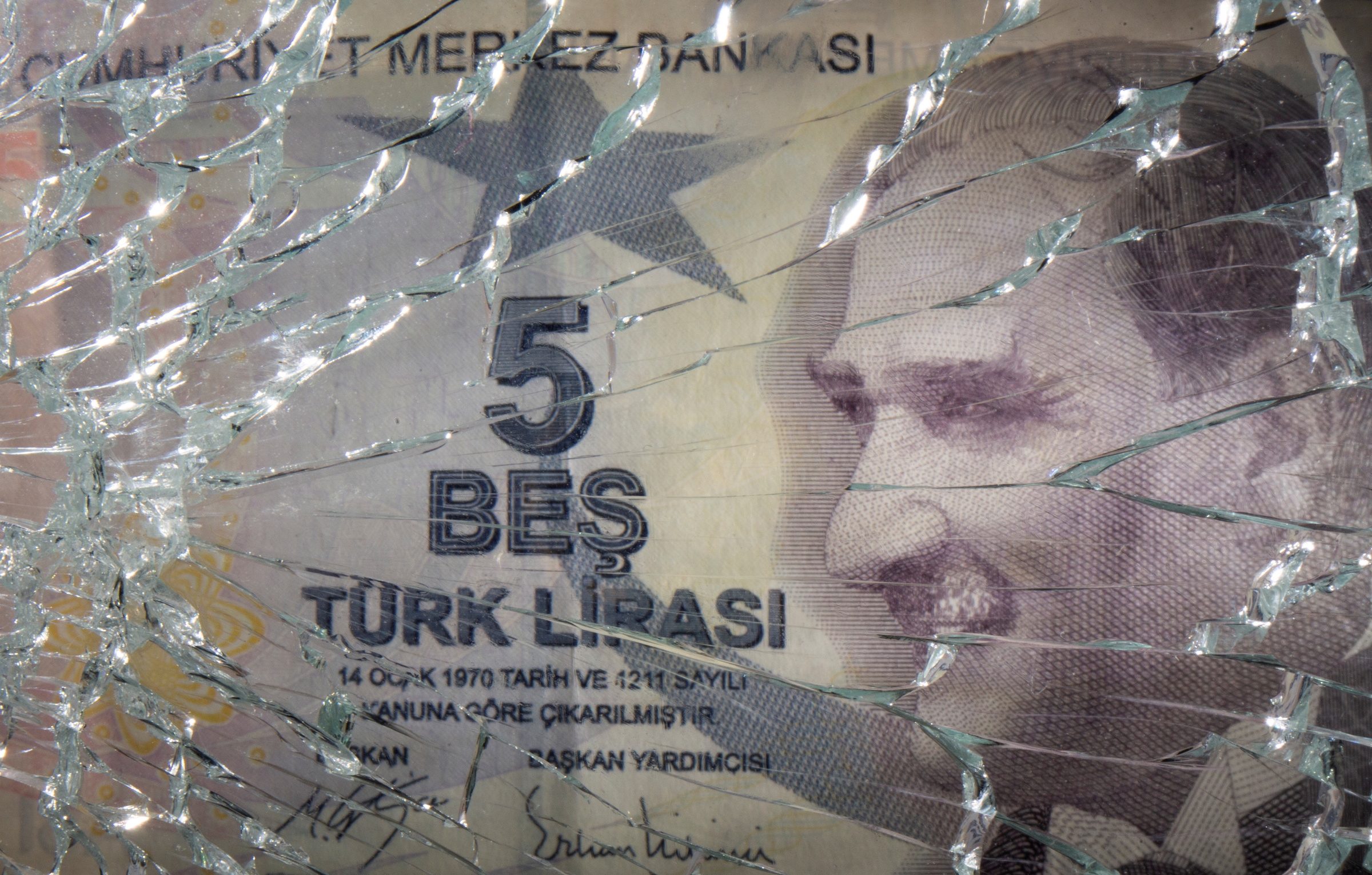 TURKISH LIRA. Broken glass is placed over a Turkish lira banknote in this illustration taken October 25, 2021.

Turkey’s lira nosedived more than 15% on Tuesday, November 23, after President Tayyip Erdogan defended recent rate cuts and vowed to win his “economic war of independence,” despite widespread criticism and pleas to reverse course.

The lira tumbled as far as 13.45 to the dollar, plumbing record lows for an 11th straight session, before trimming some of those losses to close 10.2% lower at 12.7015. It has lost 42% of its value this year, including a more than 22% decline since the beginning of last week.

Erdogan has applied pressure on the central bank to pivot to an aggressive easing cycle that aims, he says, to boost exports, investment, and jobs – even as inflation soars to near 20% and the currency depreciation accelerates, eating deeply into Turks’ earnings.

Many economists called the rate cuts reckless while opposition politicians appealed for immediate elections. Turks told Reuters the dizzying currency collapse was upending their household budgets and plans for the future.

After a meeting between Erdogan and central bank Governor Sahap Kavcioglu, the bank issued a statement saying the sell-off was “unrealistic and completely detached” from economic fundamentals.

There was no hint at an intervention to stem the meltdown. The central bank said it could only do so under certain conditions in “excessive volatility.”

Former bank deputy governor Semih Tumen, who was dismissed last month in the latest round of Erdogan’s rapid leadership overhaul, called for an immediate return to policies which protect the lira’s value.

“This irrational experiment which has no chance of success must be abandoned immediately and we must return to quality policies which protect the Turkish lira’s value and the prosperity of the Turkish people,” he said on Twitter.

Tuesday’s slide was the lira’s largest since the height of a currency crisis in 2018 that led to a sharp recession, and brought on three years of subpar economic growth and double-digit inflation.

The central bank has slashed rates by a total of 400 points since September, leaving real yields deeply negative as virtually all other central banks have begun tightening against rising inflation, or are preparing to do so.

The lira has been by far the worst-performing currency globally this year due mostly to what some analysts have called a premature economic “experiment” by Erdogan, who has ruled Turkey for nearly two decades.

Erdogan’s AK Party is sliding in opinion polls ahead of elections scheduled for no later than mid-2023, reflecting sharply higher costs of living.

“Prices are rising too fast. I don’t want to buy certain products because they’ve got too expensive,” said Kaan Acar, 28, a hotel executive in southern Turkey’s Kalkan resort, adding he was thinking of canceling a trip abroad due to the rising cost.

“The fault lies with President Erdogan, the AKP government, and those who for years turned a blind eye and supported them.”

Investors appeared to flee as volatility gauges spiked to the highest levels since March, when Erdogan abruptly sacked hawkish central bank chief Naci Agbal and installed Kavcioglu, who like the president is a critic of high rates.

Against the euro, the lira weakened to a fresh record low of 14.4225 on Tuesday as Turks snapped up hard assets.

The 10-year benchmark bond yield rose above 21% for the first time since 2018. Sovereign dollar bonds suffered sharp falls with many longer-dated issues down over 2 cents, Tradeweb data showed.

As the lira plunged, Turkey’s main share index rose 1.7% to a fresh record high due to suddenly cheap valuations, though bank stocks dropped. The central bank cut its policy rate last Thursday, November 18, by 100 basis points to 15%, and signaled another cut in December.

Erdogan received support on Tuesday from his parliamentary ally, nationalist MHP leader Devlet Bahceli, who said that high interest rates limit production and there was no alternative to a policy focused on investments.

“Turkey needs to rid itself of the hunchback of interest rates,” Bahceli said.

Erdogan defended the policy late on Monday, November 22, and said high rates would not lower inflation, an unorthodox view he has repeated for years.

“I reject policies that will contract our country, weaken it, condemn our people to unemployment, hunger, and poverty,” he said after a Cabinet meeting, prompting a late-day slide in the lira.

Societe Generale predicted an “emergency” hike as soon as next month, with the policy rate rising to about 19% by the end of the first quarter of 2022.

“Right now locals seem content to keep their dollars in the local system. If they start to move money elsewhere, to Germany, to Austria, it’s another story…. Then we will have a conversation about a real currency crisis.” – Rappler.com