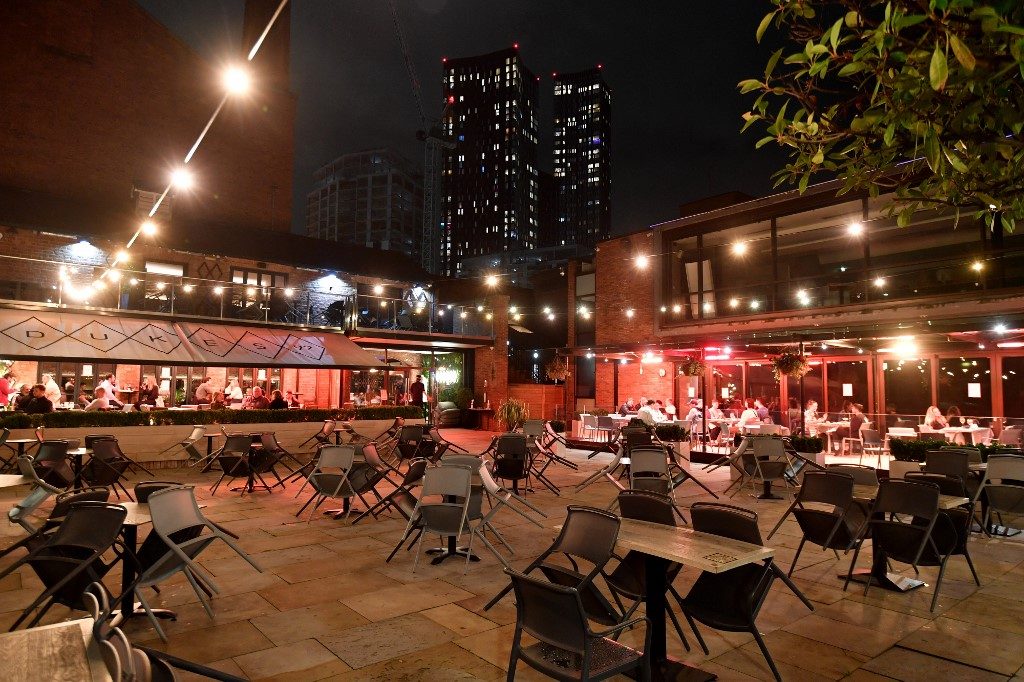 Unused tables and chairs are seen outside Dukes Bar in Castlefield in Manchester city center, northwest England, ahead of new coronavirus restrictions coming into force on October 22, 2020. - British Prime Minister Boris Johnson imposed tougher coronavirus restrictions on an area of the northewest of England after placing Greater Manchester into the government's tier 3, the highest coronavirus alert level, defying local leaders who bitterly opposed the move without extra funding. The extra restrictions which servely limits social mixing in hospitality venues will come into effect on October 23, 2020. (Photo by Anthony Devlin / AFP)

The United Kingdom government on Thursday, October 22, improved its new jobs-support scheme after businesses hit by regional coronavirus lockdowns claimed it did not go far enough.

Finance minister Rishi Sunak told parliament that he will make the scheme more generous by, for example, cutting employer contributions.

Despite the change, the scheme remains much watered down compared with a government jobs furlough package that ends on October 31.

“I’ve always said that we must be ready to adapt our financial support as the situation evolves and that is what we are doing today,” Sunak told parliament.

“I know that the introduction of further [virus] restrictions has left many people worried for themselves, their families, and communities.

“I hope the government’s stepped-up support can be part of the country pulling together in the coming months,” the chancellor of the exchequer added, but gave no estimate of the overall cost. (READ: UK virus loans may cost taxpayer up to £26 billion – watchdog)

To benefit from the new scheme, staff have to work only 20% of their normal working hours as opposed to one-third.

Employer contributions for unworked hours have meanwhile been sharply reduced to just 5% from one-third.

“These changes mean more employers can access the scheme and more jobs will be protected,” Sunak said.

Analysts expect a surge in unemployment following the end of the far superior furlough scheme that has been paying up to 80% of wages for millions of workers.

Sunak has stated that such a scheme is not sustainable after the coronavirus fallout sent the UK’s national debt soaring.

More than half of Britain’s population is meanwhile under tighter curbs aimed at halting a nationwide surge in COVID-19.

Thursday’s announcement is aimed at helping businesses in tier two regions which have thus far fared worse in terms of state support than those in tier three or “very high” virus risk areas.

In an effort to address criticism over the treatment of regions which had been in tier two since August – including Greater Manchester which moved to tier three on Friday, October 23 – Sunak added that business grants would be available retrospectively.

Swathes of northern England, including the cities of Liverpool and Manchester, have been placed under more stringent restrictions, joining Scotland, Northern Ireland, and Wales with tighter curbs to help stem spiking infections.

Some virus hotspots are seeing bans on household mixing and the closure of pubs, bars, casinos, and other venues.

That has sparked an outcry from the embattled hospitality sector.

Britain has suffered Europe’s worst death toll from the coronavirus, with more than 44,000 deaths.

New cases hit a record high of more than 26,000 on Wednesday, October 21, while there were a further 191 recorded deaths.

The government’s tweaked jobs plan comes one day after official data laid bare the vast financial cost of the pandemic.