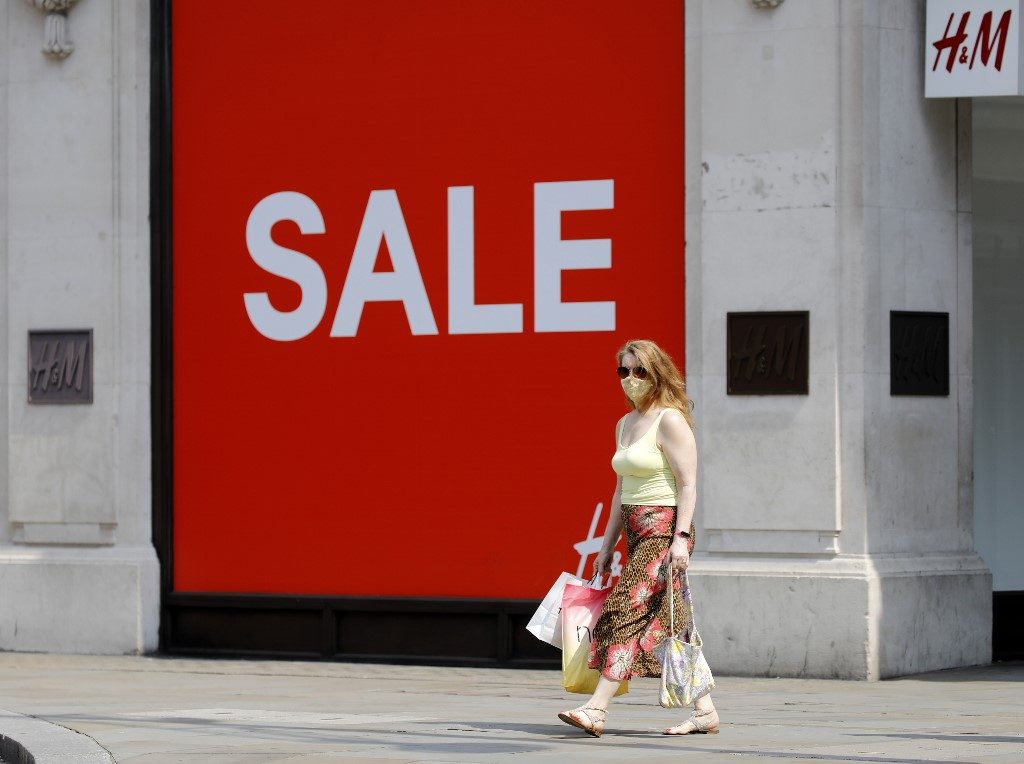 A pedestrian walks past a 'Sale' sign in the window of an H&M store in London on August 12, 2020. - Britain's economy contracted by a record 20.4 percent in the second quarter with the country in lockdown over the novel coronavirus pandemic, official data showed Wednesday. "It is clear that the UK is in the largest recession on record," the Office for National Statistics said. Britain officially entered recession in the second quarter after gross domestic product (GDP) contracted by 2.2 percent in the first three months of the year. (Photo by Tolga AKMEN / AFP)

Facebook Twitter Copy URL
Copied
Latest figures from the British Retail Consortium and ShopperTrack show that United Kingdom retail footfall was down by 30.1% in September 2020 compared with a year earlier

The squeeze on Britain’s beleaguered retail sector from tighter coronavirus restrictions reducing numbers of shoppers on the high street clung on into September, data showed on Friday, October 9.

Latest figures from industry body the British Retail Consortium (BRC) and analytics company ShopperTrack showed that United Kingdom retail footfall was down by 30.1% in September compared with a year earlier.

The data did show a slight month-on-month improvement in September from August – although local lockdown restrictions weighed on sentiment.

“As the second wave of the pandemic sweeps the UK and additional restrictions come into force, footfall has steadily dropped during the month as many shoppers chose to stay at home,” said BRC chief executive Helen Dickinson.

She added: “It is likely that rising case numbers and future restrictions may see footfall decline in the coming months.

“Sales at upcoming holidays, including Halloween and Bonfire Night, are also likely to remain muted.”

Britain began emerging in June from a nationwide lockdown that lasted almost 3 months.

The lockdown sparked a surge in online shopping as people shunned high streets and switched to computer screens and smartphones.

Bank of England Governor Andrew Bailey meanwhile warned on Thursday, October 8, that recession-mired Britain faced the prospect of an “uneven” recovery, as the government battles a second wave of rising infections with tighter restrictions and localized lockdowns.

“When you look at areas of activity in the economy that require more close social interaction, it’s no surprise that they have been the weakest to recover,” he said at an online conference.

Bailey also warned that the risks were skewed to the downside – and noted Britons had been “cautious” in response to grim news of resurgent infections.

“There is an unprecedented level of uncertainty at the moment – and the risks I am afraid are still very much to the downside.

“Of course, that reflects both firstly the pattern of returning evidence of COVID, and secondly – unsurprisingly – the natural caution of people’s reengagement with [economic] activity in view of that.” – Rappler.com