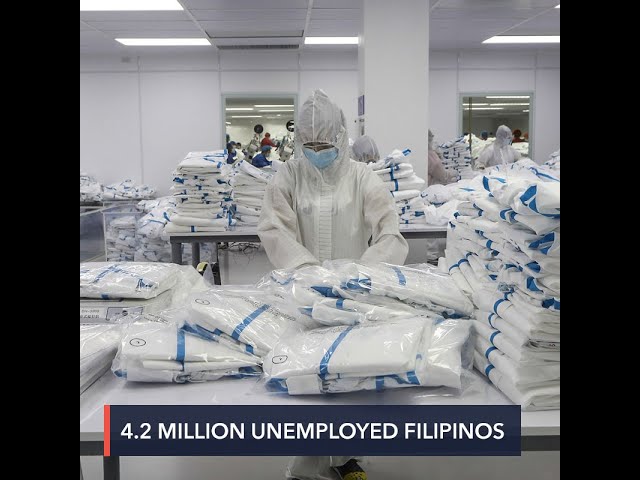 Hopeful Filipinos looking for a job as the economy opened up in February failed to find one, while those who did still struggled to make ends meet, latest figures from the Philippine Statistics Authority (PSA) showed.

The PSA reported on Tuesday, March 30, that the unemployment rate rose to 8.8% in February, higher than the 8.7% last January, reflecting the scars in the labor market brought about by the coronavirus pandemic.

The figure in the labor force survey (LFS) is equivalent to 4.2 million jobless Filipinos in February, higher than the 4 million unemployed in January.

Meanwhile, the underemployment rate or the percentage of the population with jobs but are looking for more work stood at 18.2%, equivalent to 7.9 million individuals. This is higher than the 16% in January, which had translated to 6.6 million people.

Underemployment shooting up indicates that people are likely struggling to cope with rising prices.

National Statistician Dennis Mapa noted that the number of working hours a week were trimmed to 38.9 in February compared to 39.3 hours in January, as businesses cut costs amid a challenging economic environment.

Meanwhile, the labor force participation rate, which reflects the percentage of the population working or actively looking for work, was at 63.5% in February, higher than January’s 60.5%.

The labor force – individuals who are either employed or unemployed – reached 47.3 million in February, from 45.2 million in January.

Mapa said the increase in the labor force participation rate can be attributed to optimism brought about by the economy reopening.

(We expected the unemployment rate to go up because more people entered the labor force and not all of them found jobs. Though more people are employed, underemployment also went up by 1.3 million.)

February’s employment rate stood at 91.2%, equivalent to 43.2 million Filipinos with jobs. This is slightly lower than January’s 91.3%.

In a joint statement, the government’s economic team said that some 1.9 million jobs were restored.

“This means we have surpassed our pre-pandemic employment level of 42.6 million in January 2020,” the statement read.

The LFS also showed that some 9.1 million Filipinos experienced being laid off temporarily or permanently from March 2020 to February 2021.

The top 5 industries which registered the largest drop in employment from January to February were the following:

Despite the government opening up tourism spots in February, Mapa said many establishments have not operated.

Meanwhile, the following sectors got the largest increases in employment:

Despite unemployment rising and more people looking for jobs, the government’s economic managers, including Acting Socioeconomic Planning Secretary Karl Chua, Finance Secretary Carlos Dominguez III, and Budget Secretary Wendel Avisado, said they have seen improvements in the labor market due to the reopening of the economy.

“The results of the latest LFS show continued improvements in the economy. Although the unemployment rate marginally increased to 8.8% in February 2021 from 8.7% in January 2021, the gradual reopening of the economy allowed more people to rejoin the labor force,” the economic team said.

The latest employment figures come as Filipinos find it harder to afford food amid rising prices.

The PSA is conducting the LFS monthly to track the employment situation amid the coronavirus pandemic. – Rappler.com