Little improvement in US jobless claims before vote 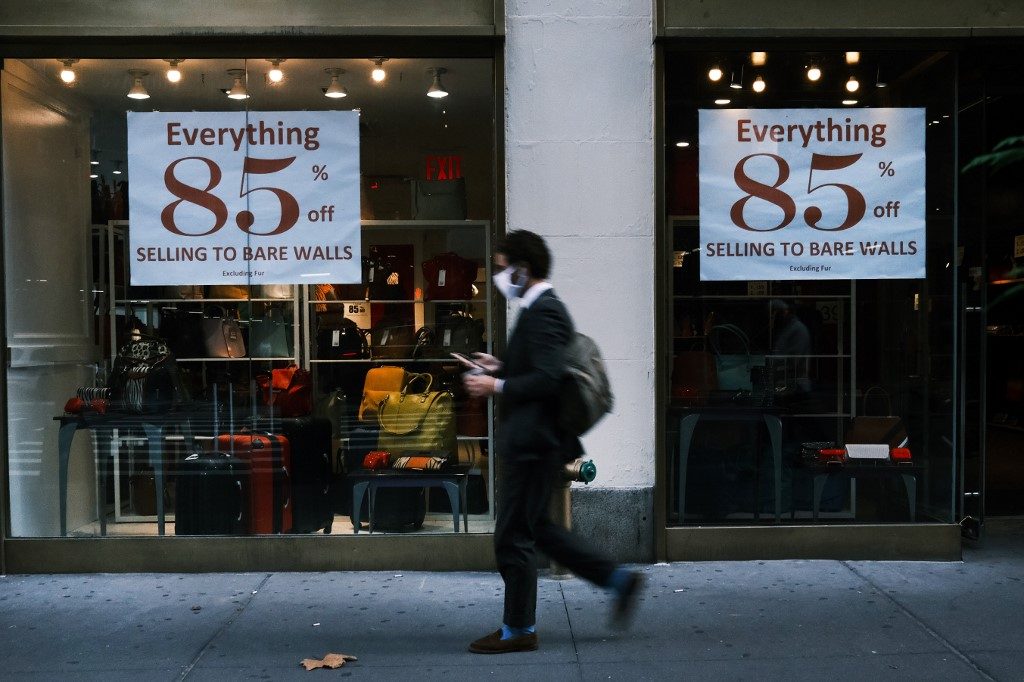 Signs advertise a sale in a New York City business on October 15, 2020. As American workers continue to struggle in an economy brought down by COVID-19, new jobless claims rose to 898,000 last week. It was the highest number since August 22 and represented a gain of 53,000 from the previous weeks upwardly revised total of 845,000. Spencer Platt/Getty Images/AFP

Jobless claims spiked into the millions beginning in March after businesses began shutting down to stop COVID-19 from spreading, and while they’ve since dropped dramatically, the latest reading remains above the worst single week of the 2008-2010 global financial crisis.

Trump presided over an expanding economy that achieved record low unemployment until the business shutdowns began, and while vote counting hasn’t been completed, Biden has pulled ahead in several key states needed to win the presidency.

As COVID-19 cases surge across the nation, analysts warn of a deteriorating economic situation as the year draws to a close.

“The labor market remains under stress from an elevated pace of layoffs,” Rubeela Farooqi of High Frequency Economics said.

“A resurgence in virus cases that will result in business closures and job losses will further damage the labor market and will slow the pace of rebound going forward.”

The data showed an additional 362,883 people, not seasonally adjusted, filing under a special program for workers not normally eligible for aid.

All told, more than 21.5 million people were receiving government benefits as of the week ended October 17, the latest week for which data was available.

The data also showed the number of people receiving benefits under the Pandemic Emergency Unemployment Compensation program designed for long-term joblessness rising by 277,564 to nearly 4 million, indicating many people were having trouble finding work.

The data was released one day after the United States reported more than 99,000 new coronavirus cases, worsening what is already the world’s largest outbreak.

Also worrying analysts is Congress’ failure to pass another spending package to bolster the economy’s recovery, with the expanded unemployment programs set to lapse at the end of the year.

“The initial unemployment number not falling as much as expected is just the tip of the iceberg, as the economy’s ability to add jobs and keep people off assistance is quickly weakening,” Robert Frick of Navy Federal Credit Union said.

“More stimulus is needed to help these Americans and keep the unemployment numbers from starting to rise.” – Rappler.com