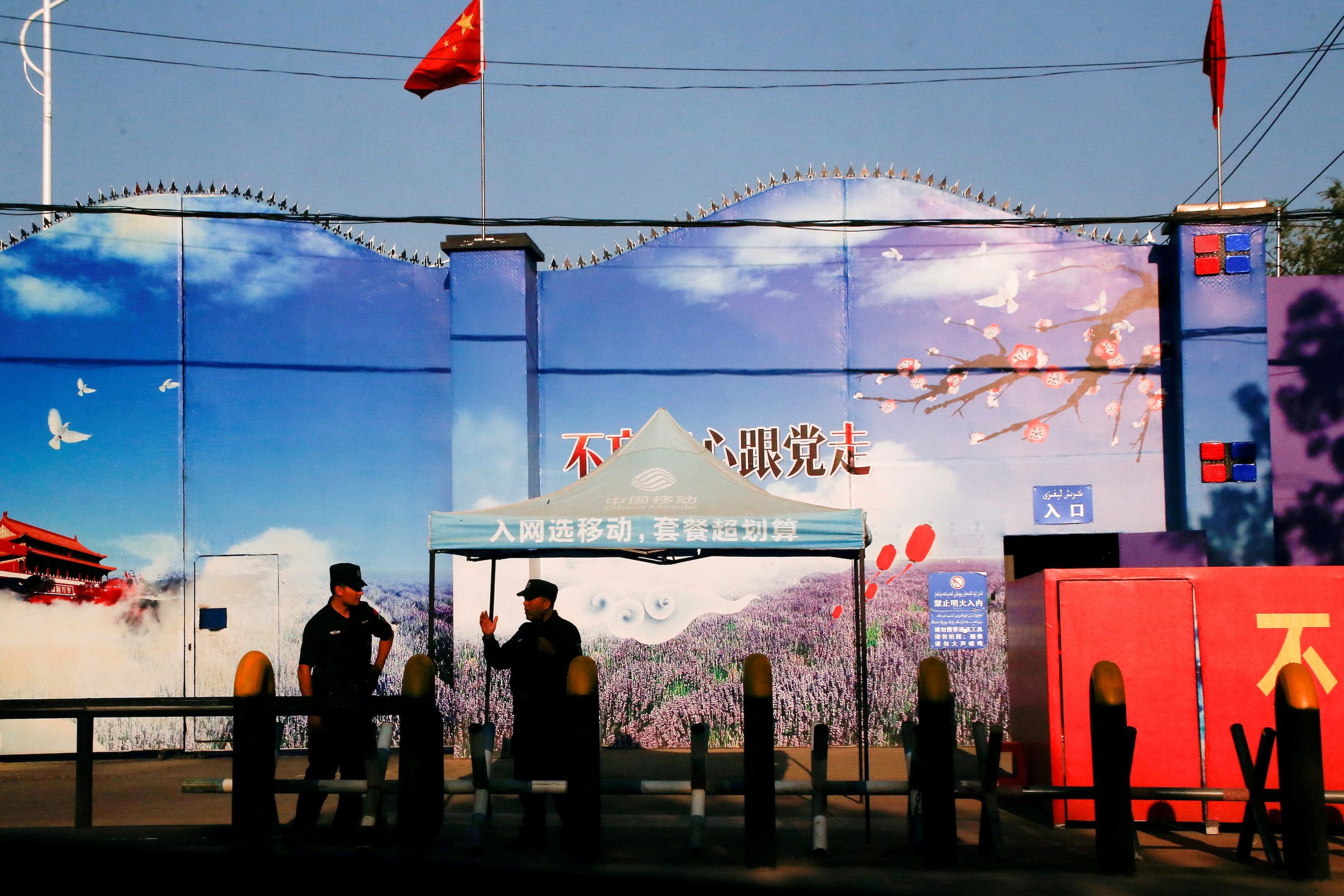 LABOR CONCERNS. Security guards stand at the gates of what is officially known as a vocational skills education center in Huocheng County in Xinjiang Uyghur Autonomous Region, China, September 3, 2018.

Facebook Twitter Copy URL
Copied
Businesses and individuals 'could run a high risk of violating US law' if they maintain links to Xinjiang, says the US State Department

The US government on Tuesday, July 13, strengthened its warnings to businesses about the growing risks of having supply chain and investment links to China’s Xinjiang region, citing forced labor and human rights abuses there.

“Given the severity and extent of these abuses, businesses and individuals that do not exit supply chains, ventures, and/or investments connected to Xinjiang could run a high risk of violating US law,” the State Department said in a statement.

Signaling broader US government coordination on the issue, the Department of Labor and the US Trade Representative’s Office joined in issuing the updated advisory, first released on July 1, 2020, under the Trump administration by the State, Commerce, Homeland Security, and Treasury departments.

The Treasury Department declined to comment on a Financial Times report that the United States would impose more sanctions this week in response to China’s crackdowns in Xinjiang and Hong Kong.

The new advisory announced on Tuesday strengthens warnings to US companies, noting they are at risk of violating US law if their operations are linked even “indirectly” to the Chinese government’s “vast and growing surveillance network” in Xinjiang. The warning also applies to financial support from venture capital and private equity firms.

It also summarized previously announced actions taken by the Biden administration to address alleged forced labor and rights abuses in Xinjiang, including a US Customs and Border Protection ban on some solar product imports, and sanctions on Xinjiang companies and entities.

On Friday, July 9, the administration added 14 Chinese companies and other entities to its economic blacklist over alleged human rights abuses and high-tech surveillance in Xinjiang.

The advisory said China’s government continues “horrific abuses” in Xinjiang and elsewhere “targeting Uyghurs, ethnic Kazakhs, and ethnic Kyrgyz who are predominantly Muslim, and members of other ethnic and religious minority groups.”

USTR Katherine Tai praised Canada, Mexico, and other US partners and allies for committing to ban the import of goods made with forced labor.

“I want to commend our allies for sending a clear sign that there is no place for forced labor in a fair, rules-based international trading system,” she said in a statement.

President Joe Biden has sought to enlist help from US allies to hold Beijing accountable for human rights abuses and what the White House says are increasingly coercive foreign and trade policies.

State Department spokesman Ned Price told a regular news briefing Washington would continue to hold Hong Kong authorities accountable for the erosion of the rule of law and would impose “costs and sanctions” on Chinese officials responsible for human rights abuses, including forced labor.

He said risks to the rule of law that were formerly limited to mainland China were now increasingly a concern for Hong Kong, but made no specific mention of any new measures. – Rappler.com