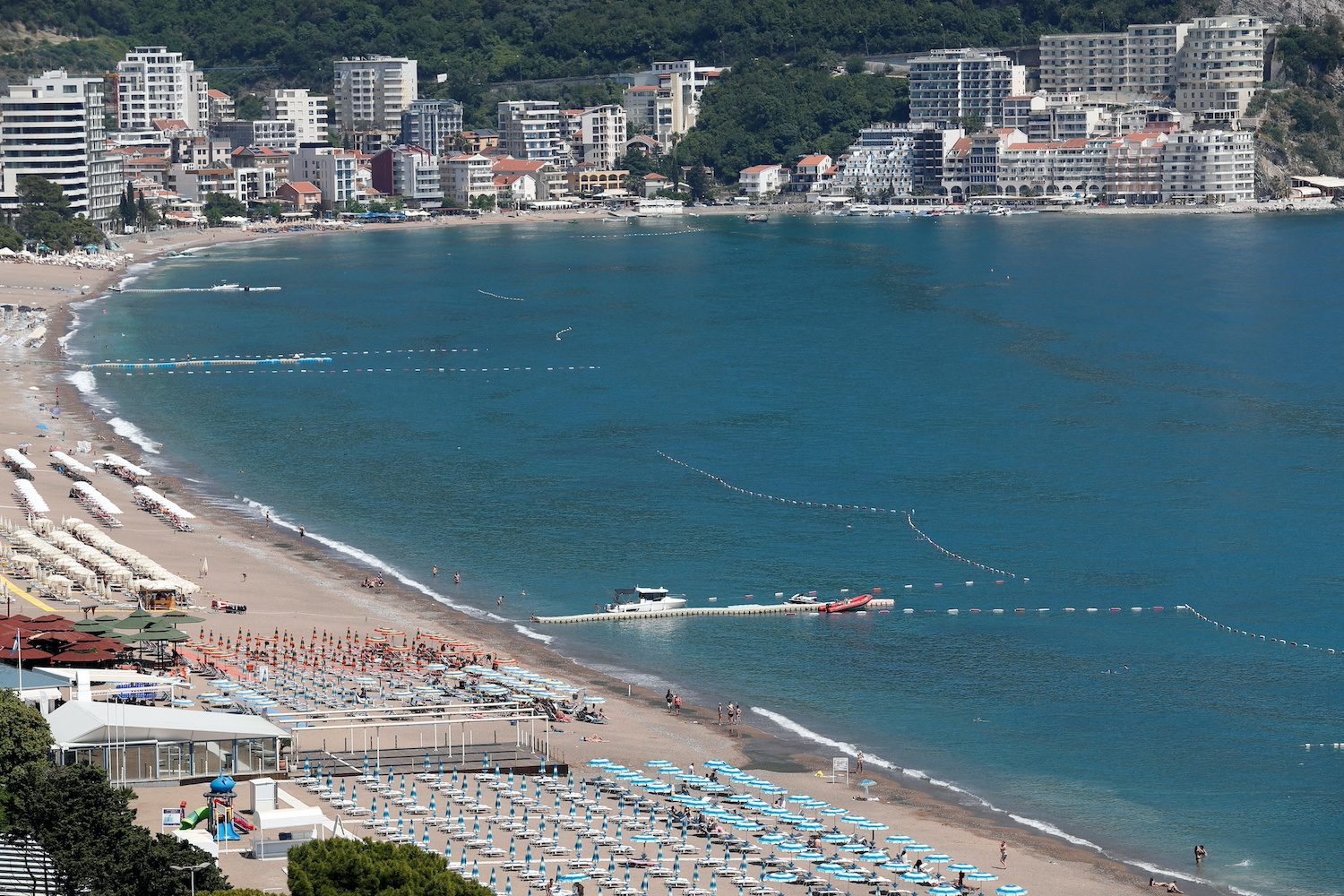 TOURISM. A general view of Becici beach in Budva, the main summer tourist destination in Montenegro, May 24, 2022.

Facebook Twitter Copy URL
Copied
Adriatic resorts in Croatia, Montenegro, and Albania, NATO members that have joined international sanctions against Russia, are all feeling the absence of Russian and Ukrainian tourists

BECICI, Montenegro – The once ubiquitous Russian signs along Montenegro’s picturesque Adriatic coast have all but disappeared as the war in Ukraine and sanctions against Russia keep tourists from those countries away from one of their favorite destinations.

Adriatic resorts in Croatia, Montenegro, and Albania, NATO members that have joined international sanctions against Russia, are all feeling their absence, dealing a blow to their economies.

The sanctions include a ban on commercial flights from Russia, the blocking of Russian banks from international payment systems making it harder for Russians to access cash abroad, and the seizure of some real estate and yachts belonging to Russia’s oligarchs.

In the Montenegrin resort of Becici, Zarko Radulovic, a hotelier, said there would be few tourists this year from the two countries, although thousands of Russians and Ukrainians who had fled the war were renting flats long term.

Hoteliers say there are not enough of them however to compensate for the 380,000 Russians who visited Montenegro in 2019, and they are spending far less than tourists.

Some Russian tourists could come via Istanbul and Belgrade, airports still open to flights from Russia, Radulovic said, adding he hoped visitors from Western and Central Europe, Israel, and even Saudi Arabia would compensate for the shortfall. Tourism has typically accounted for about 20% of Montenegro’s economy.

The World Bank last month downgraded Montenegro’s 2022 economic growth forecast to 3.6% from a previous 5.9%, due to the effects of the invasion.

In the last pre-pandemic year, neighboring Croatia had a total of 154,000 Russian and 139,000 Ukrainian guests. In 2021 around 145,000 tourists from each country visited, according to official data.

In January and February of this year 12,000 Russians visited Croatia, but during March, April, and the first half of May only around 4,500 came, far fewer than normal.

In Albania, where the tourism sector is anxious to recover from the effects of the pandemic, hopes were high that 2022 would be a boom year. But the war in Ukraine is threatening to disrupt that, said Aurenc Hima, a hotelier from the coastal resort of Durres.

“We had many reservations from Russians and Ukrainians but they have been canceled,” he said.

Kliton Gerxhani, the president of the Association of Tour Operators and Tourist Agencies, said war in Ukraine had also unsettled potential holidaymakers from Baltic and Scandinavian countries, as well as Poland and Germany.

“There is a hesitation from these countries to make hotel reservations in Albania. Maybe the tourists of these countries will wait until the last minute…depending on the course of the war.” – Rappler.com