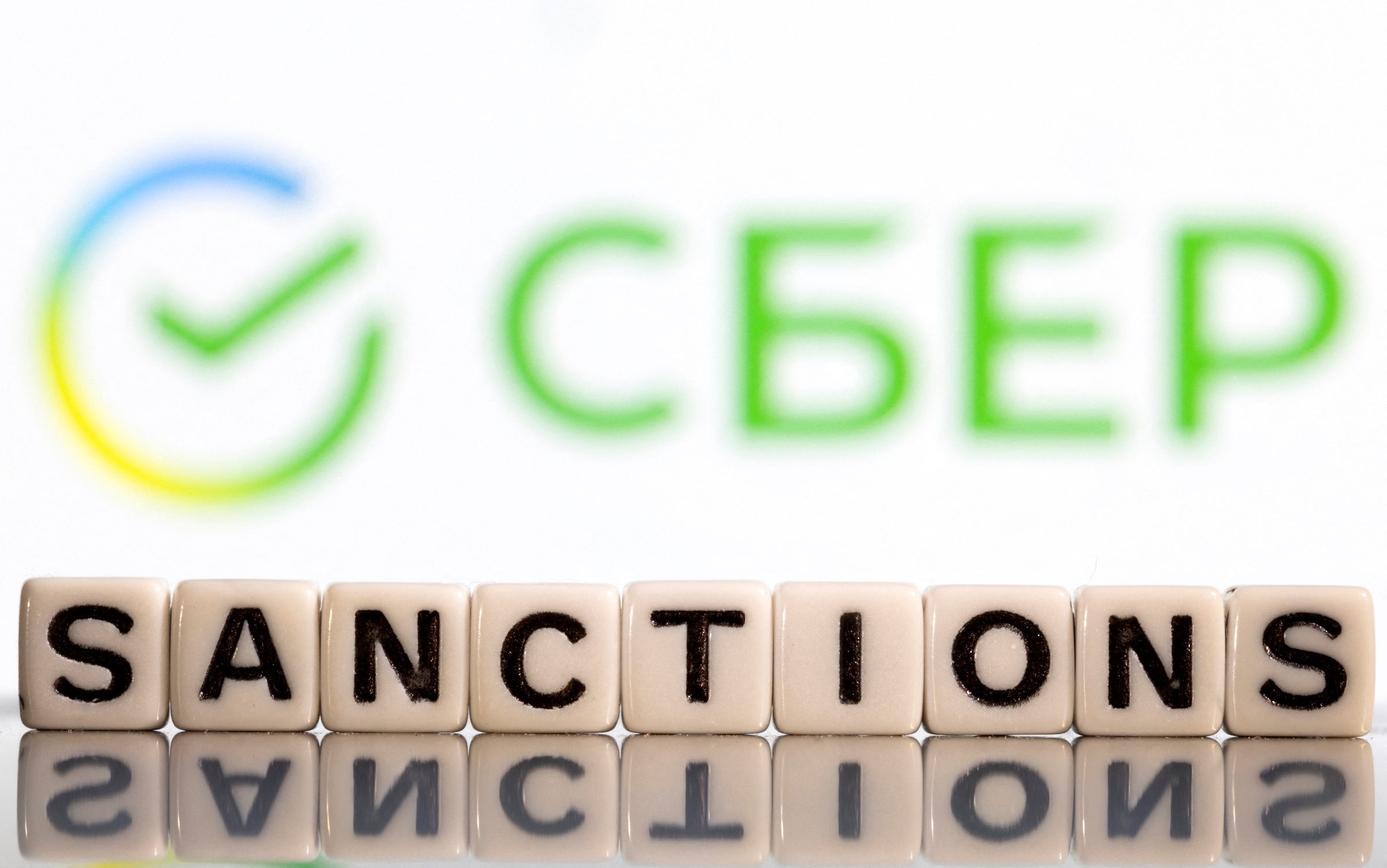 SANCTIONS. Plastic letters arranged to read 'Sanctions' are placed in front of the Sberbank logo in this illustration taken in Bosnia and Herzegovina, February 25, 2022.

Facebook Twitter Copy URL
Copied
(1st UPDATE) Russia's large banks are deeply integrated into the global financial system, meaning any sanctions on the biggest institutions could be felt far beyond its borders

The United States, Britain and European Union ratcheted up sanctions against Moscow on Saturday, February 26, as Russia continued its assault against Ukraine, saying they would block access to the SWIFT international payment system.

Here is a rundown of how sanctions which have already been announced impact banks and investors:

What has been announced so far?

The United States, Britain, Europe, and Canada committed on Saturday to removing some Russian banks from the SWIFT payments system, deploying what the French finance minister had earlier called a “financial nuclear weapon” because of the damage it would cause to Russia as well as its trading partners.

The latest round of sanctions came after the US Treasury Department said it was targeting the “core infrastructure” of Russia’s financial system, sanctioning two of its largest banks – state-backed Sberbank and VTB. Also on the sanctions list are Otkritie, Sovcombank, and Novikombank and some senior executives at state-owned banks.

US banks must sever their correspondent banking ties – which allow banks to make payments between one another and move money around the globe – with Russia’s largest lender, Sberbank, within 30 days.

Officials in Washington also wielded the government’s most powerful sanctioning tool, adding VTB, Otkritie, Novikombank, and Sovcombank to the Specially Designated Nationals list. The move effectively kicks the banks out of the US financial system, bans their trade with Americans, and freezes their US assets.

The US sanctions also target two Belarusian state-owned banks – Belinvestbank and Bank Dabrabyt – over the country’s support for Moscow’s attack.

The US sanctions came soon after the British government said it would impose an asset freeze on all major Russian banks, including VTB, and stop major Russian companies from raising finance in Britain.

Britain also announced asset freezes and travel bans on members of Russia’s political and financial elite, including those who have long enjoyed high-rolling London lifestyles.

More than 100 individuals, entities, and subsidiaries will ultimately be sanctioned.

The bloc imposed a ban on issuing bonds, shares, or loans in the EU for refinancing Alfa Bank and Bank Otkritie, after freezing assets at Rossiya Bank, Promsvyazbank, and VEB earlier in the week.

The top three Russian banks Sberbank, VTB, and Gazprombank, however, do not face an EU asset freeze.

Refinancing in the EU of Russian state-owned enterprises is also forbidden, with the exception of some utilities. Securities settlement houses in the EU will not be allowed to serve Russian counterparties.

Russia’s large banks are deeply integrated into the global financial system, meaning any sanctions on the biggest institutions could be felt far beyond its borders. Cutting them from SWIFT would make transactions more difficult and costlier.

But it is also expected to hurt the country’s trading partners in Europe and elsewhere. While further details are awaited, Germany suggested on Saturday that the allies were looking for “targeted and functional restriction of SWIFT” to limit collateral damage.

A ban from SWIFT would come on top of other sanctions that limit the ability of some of Russia’s largest banks to do business internationally.

The US Treasury said the sanctions on Thursday, February 24, would disrupt billions of dollars worth of daily foreign exchange transactions conducted by Russian financial institutions. Overall, these institutions conduct about $46 billion worth of forex transactions, 80% of which are in dollars. “The vast majority of those transactions will now be disrupted,” it said.

The sanctions target nearly 80% of all banking assets in Russia.

Sberbank said that it was prepared for any developments.

VTB said it had prepared for the most severe scenario.

Sovcombank, Otkritie, and Novikombank did not reply to requests for comment. The Russian embassy in the United States also did not immediately reply to a request for comment.

What would hit hardest?

Banks and Western creditors have been fearing Russia getting blocked from SWIFT, which is used by more than 11,000 financial institutions in over 200 countries.

Such a move would hit Russian banks hard but the consequences are complex. Western officials have said blocking Russia is technically difficult and would hurt trading partners. There have been concerns, for example, about how payments for Russian energy imports would be made and whether foreign creditors would get paid.

Analysts said Russian institutions are better able to cope with sanctions than eight years earlier, although that does not mean they would not hurt.

Which foreign banks are most exposed?

Many foreign banks have significantly reduced their exposure to Russia since its annexation of Crimea in 2014 but several Western banks have been involved in deals and have other relationships.

Shares of banks with significant operations in Russia such as Austria’s Raiffeisen Bank International and France’s Societe Generale were hard hit last week.

Italian and French banks each had outstanding claims of some $25 billion on Russia in the third quarter of 2021, based on Bank for International Settlements figures.

Austrian banks had $17.5 billion. That compares with $14.7 billion for the United States. – Rappler.com