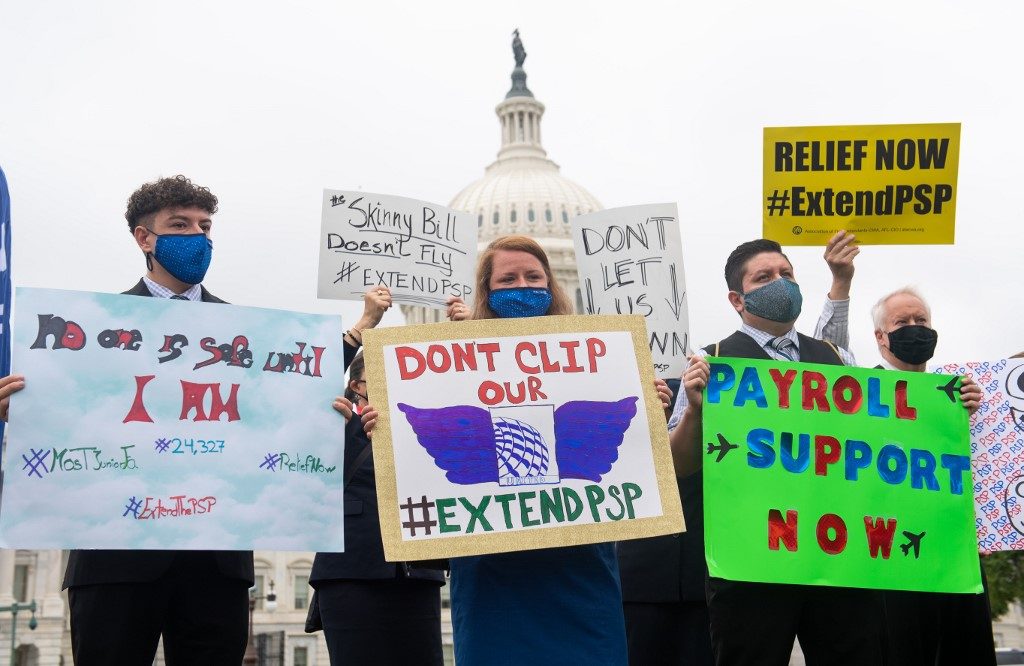 Aviation workers hold a protest urging the US Congress to pass a COVID-19 relief package and extend the Paycheck Support Program, outside the US Capitol in Washington, DC, on September 9, 2020. (Photo by SAUL LOEB / AFP)

The coronavirus pandemic is taking a heavier toll on jobs than previously feared, the United Nations (UN) said on Wednesday, September 23, with hundreds of millions of jobs lost and workers suffering a “massive” drop in earnings.

In a fresh study, the International Labour Organization (ILO) found that by the midyear point, global working hours had declined by 17.3% compared to last December – equivalent to nearly 500 million full-time jobs.

That is nearly 100 million more job-equivalents than the number forecast by the ILO back in June, when it expected 14% of working hours to be lost by the end of the second 3-month period of the year.

“The impact has been catastrophic,” ILO chief Guy Ryder told reporters in a virtual briefing, pointing out that global labor income had shrunk by 10.7% during the first 9 months of the year compared to the same period in 2019.

That amounts to a drop of some $3.5 trillion, or 5.5% of the overall global gross domestic product (GDP), the ILO said.

Since surfacing in China late last year, the novel coronavirus has killed nearly one million people worldwide out of the more than 31 million infected.

In addition to the health challenges, lockdowns, travel restrictions, and other measures taken to rein in the virus have had a devastating impact on jobs and income across the globe.

The ILO also warned that the outlook for the final 3 months of 2020 had “worsened significantly” since its last report in June.

The organization had previously forecast that global working hours would be 4.9% lower in the 4th quarter than a year earlier, but said it now expected an 8.6% drop, which corresponds to 245 million full-time jobs.

It explained that workers in developing and emerging economies, especially those in informal jobs, had been much more affected than in past crises.

The ILO also pointed out that while many of the most stringent workplace closures have been relaxed, 94% of the world’s workers were in countries where some sort of workplace restrictions remain in place.

And Sangheon Lee, head of the ILO’s employment policy division, warned that the situation for workers could worsen further.

If second waves of infections bring tighter restrictions and new lockdowns, he said, “the impact on the labor market could be comparable to the magnitude we saw in the 2nd quarter of this year.”

Ryder cautioned against those pushing for policy makers to focus on economy over health in their response to the pandemic.

“It is very clear…that the capacity and the speed with which the global economy can get out of its labor market slump is intimately linked to our capacity to control the pandemic,” he said.

“These two things are very, very intimately intertwined, and we have to act on that understanding.”

The ILO’s report meanwhile showed that the labor market devastation could have been worse without the numerous fiscal stimulus packages provided by governments.

Without such stimulus efforts – amounting to around $9.6 trillion globally – global working hours would have shrunk by a full 28% in the 2nd quarter, it said.

But it warned that fiscal stimulus was delivered very unevenly, with low- and middle-income countries receiving around $982 billion less in overall support than their wealthy counterparts.

Ryder urged international efforts to close the gap, insisting that “no group, country, or region can beat this crisis alone.” – Rappler.com