Check out the photos from the reception: 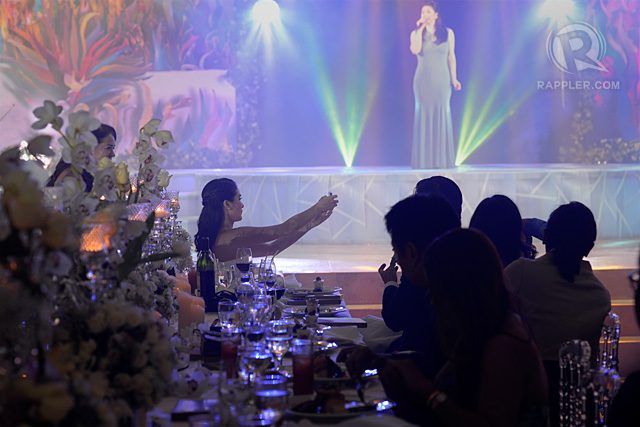 Heart and Chiz mingled guests after the program ended:

Program has ended. Heart and Chiz mingling with guests. pic.twitter.com/LbrhylmoUj

The newlyweds posed with other guests:

Here’s another set of shots of the newlywed couple: Unmarried ladies gathered to collect the bouquet. In the end, Lovi Poe won: Lovi Poe then spoke about Heart and Chiz’s wedding:

Actress Lovi Poe is here with Rocco Nacino, and here is another photo of Senator Grace Poe: Kim Chiu posed in her outfit for the night:

Hairstylist Jerry Javier posted a photo of him and Heart in her white Monique Lhuillier gown:

Printblast, one of the photographers, posted this:

Makeup artist Albert Kurniawan posted a photo of Heart getting ready for the reception:

During their reception in Balesin, the couple thanked their family and friends for celebrating with them despite challenges in their relationship. Heart’s parents did not attend the wedding.

Heart’s father sent a surprise letter telling Heart that it pained him that he couldn’t walk Heart down the aisle. He also told Chiz in the letter to take care of Heart.

Chiz promised to love Heart and said that he would only call Mr. Ongpauco ‘dad’ or ‘tatay,’ when he is permitted to do so. –Rappler.com

More on Heart and Chiz’s wedding on Rappler: