Janine Gutierrez won the Rising Star Award at the New York Asian Film Festival (NYAFF) for her performance in the film Dito at Doon.

The news was first announced by TBA Studios on their social media accounts on Saturday, August 7. Janine quoted the post, and said it was a “dream come true.”

NYAFF’s official Twitter account also shared the news. “We are thrilled to present [Janine Gutierrez] with the Rising Star Award this year,” they wrote.

Janine then shared her happiness over the milestone. “So honored! Thank you NYAFF! Second year to have a film part of your festival and I was so sad that for the second time, we’re still unable to attend. But now I’m just filled with gratitude. Thank you for supporting Filipino films and creatives,” she said.

Dito at Doon, which premiered in the “NEXT/NOW” program section of NYAFF this year, is Janine’s second film to be included in the film festival. In August 2020, Babae at Baril, which also stars Janine, was chosen to open the NYAFF.

According to its website, NYAFF is North America’s leading festival of Asian cinema. It is dedicated to the exhibition and appreciation of Asian film culture in all its forms.

Dito at Doon is a film set during the pandemic. Janine plays Len, a woman who, despite living alone in the lockdown, manages to meet someone online through common friends. That someone is JC Santos’ character Cabs, a delivery boy who makes a connection with Len through video chats and phone calls. 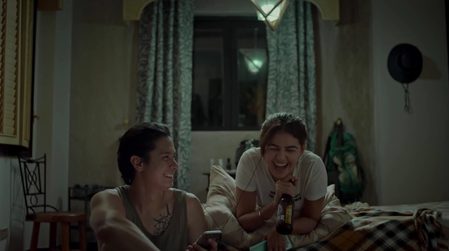 Directed by JP Habac, it premiered in the Philippines and the Osaka Asian Film Festival in March. Dito at Doon will also be available for streaming on Netflix beginning September 2.

Janine is currently filming the ABS-CBN television series Marry Me, Marry You, where she co-stars alongside Paulo Avelino. – Rappler.com