Facebook Twitter Copy URL
Copied
'The alienation and neglect that comes with old age, however, is not the singular whole that defines the film but is part of a much more brutal and bleaker landscape'

If there’s a god-tier form of premium subscription plan in this tech-addled age of Netflix, the poster child of modern capitalism, it must be this: deciding on when and how you wish to die — and Chie Hayakawa’s debut feature Plan 75 offers exactly that.

Set in a Black Mirror-ian Japan, Hayakawa’s characters inhabit a dystopian economic order that naturally thrives by preying on young labor and rendering the aging population useless and disposable (at times, literally: cremation ashes are donated to landfill areas for recycling). So to ease the burden of having “a surplus of seniors,” as Peter Debruge of Variety puts it, the government ushers in a grand remedy: an all-expenses-paid euthanasia program aptly called Plan 75 – for people aged 75 and over, parading the chilling tagline, “We’re there for you until the very end.”

The program comes with a modest sum that applicants can spend on practically anything: beauty treatments, a luxurious vacation trip, super deluxe meals, you name it. It may even be offered with package deals, in case you wish to share your final exit with loved ones or dear friends. And Plan 75 works perfectly fine: listening services are up 24/7, sales representatives are extra accommodating, and the bureaucracy of the application process won’t get under your skin more than it usually would. Only sign a form and choose a desired plan, and they’ve got everything else covered for you. The state-sponsored policy benefits the economy so much that those in power are thinking of lowering the age of eligibility to 65.

Hayakawa first debuted this chilling premise in a short film of the same name as part of the 2018 omnibus speculative work Ten Years Japan, an iteration that attempts to reimagine the state of developed nations after a decade. In an interview with The Hollywood Reporter, Hayakawa disclosed that the film also borrows details from the 2016 Sagamihara stabbings in which an ex-worker of a residential center for the disabled went on a stabbing rampage, leaving 19 dead and 26 others injured. The crime’s motive: to relieve society of the supposed burden of the gravely impaired through a twisted idea of euthanasia.

But the director is not hung up on solely setting up the entire thing, and the moment Plan 75 refuses to be confined by its conceit, it turns out to be a more seething yet quiet drama, with Hayakawa knitting a tapestry of how bleak and absurd the system is by harnessing individual narrative arcs.

At the heart of the film is Mishi (Chieko Baishô), a 78-year-old hotel housekeeper who gets laid off and struggles to find a new job precisely due to her age. Multiple rejections later, she is forced to avail of the Plan 75 service, never mind that her will goes against it. What could have prepared her more for it than the imposing socioeconomic reality she finds herself in? And so she applies for the program and receives a lean compensation, counting on a 15-minute-per-night call with Yoko (Yuumi Kawai), a customer service agent who guides her through the process and whom she emotionally connects with.

The lack of economic security is also what brings senior caregiver Maria (Stefanie Arianne) to take on a job at the Plan 75 crematorium, seeking better pay to provide for her daughter’s heart surgery back in the Philippines. Meanwhile, recruitment worker Himoru (Hayato Isomura) is forced to come to terms with his pro-Plan 75 stance after finding out that his uncle Yukio (Takao Taka) has subscribed to the service. 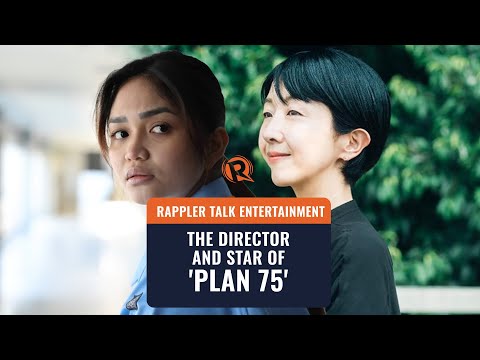 Matched by Masaru Usui’s poignant soundscape and Hideho Urata’s languid cinematography, Hayakawa approaches her subjects with compassion — the very thing Plan 75 is devoid of (“Seniors are lonely people by nature,” says a sales agent). She doesn’t resort to cheap emotion but instead places her characters against the imbalances of power that simply cannot be remedied by mere agency, no matter how well-intentioned such agency is.

For instance, when Maria finds a stash of money inside a bag owned by a cremated client, she feels reluctant to take the cash yet she knows she needs it for her kid. Besides, it has “no use for dead people,” as her fellow worker would say. One never gets to know if she actually takes it, but it doesn’t take much to discern what that moment implies, hinting at how collective guilt and clear-cut ethics get eroded in the face of social inequality.

Maria’s storyline confronts Filipino labor, which has recently been interrogated by international cinema, as wisely noted by film critic Jason Tan Liwag. But it cannot be denied that Plan 75 leaves something to be desired about how it handles the cruel and exploitative conditions of Filipino migrant workers across the globe, all while being celebrated as heroes in their home country.

Of course, the film is not the first of its ilk, at least in terms of narrative and social commentary. Cinematic pieces navigating the plight of the elderly have been depicted to a T by instant classics such as Yasujirō Ozu’s Tokyo Story (1953) and Leo McCarey’s Make Way for Tomorrow (1937). But what makes Hayakawa’s work particularly searing is how, at the rate of things, a fictional legislation like Plan 75 is not beyond the bounds of possibility, outlined by scenes replete with static, wide shots to make the critique linger like a brewing wine. Take for example the scene where Mishi stands still and quiet in her apartment’s balcony, staring at the horizon point-blank, as if she’s finally resigned herself to the absurdity of the situation, ever so gently unfolding ruptures in this moment of silence.

Baishô’s subdued yet shatteringly solid performance is what makes Plan 75 a master plan. So when Mishi takes her last 15-minute phone call, bidding her goodbye and listening to the trembling voice of Yoko as she recites the Plan 75 spiel, one cannot help but unclog tear ducts.

The alienation and neglect that comes with old age, however, is not the singular whole that defines the film but is part of a much more brutal and bleaker landscape: how healthcare systems across many countries remain to be a living inferno for marginalized sectors such as the elderly, how state leaders are willing to go to great, dehumanizing lengths to bolster their self-interests, and how labor is rendered as the currency that shapes one’s function under a capitalist society.

Callous and harrowing as it is, Plan 75 offers an act of resistance towards the end. As Mishi, alongside other patients, is about to be euthanized, she decides to unsubscribe from and ignore the plan altogether: a refusal to commodify her own death. So she removes her ventilation mask, escapes the facility, and runs like she never did before, her breathing becoming more and more laborious. She stops at the breathtaking sight of a setting sun blanketing the city. She gazes at it in a way that transcends language. She croons a song. It’s a sight to behold — where Plan 75, a drama buoyed by death and finality, surprisingly teems with life. – Rappler.com

Plan 75 was part of the Asian Next Wave competition at the recently-concluded QCinema International Film Festival.