Slipknot is heading to Manila in 2020 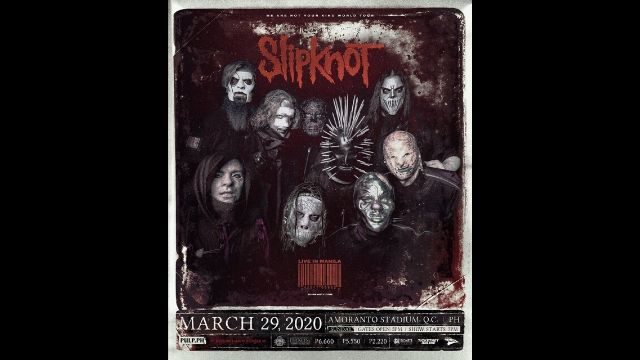 The concert, part of the band’s We Are Not Your Kind World Tour, will be held at the Amoranto Stadium in Quezon City. Gates will open at 5 pm, and show starts at 7 pm.

The Grammy Award-winning heavy metal band first burst onto the scene with the release of their eponymous debut album in 1999. Since then, they’ve come to be known for their energetic live shows where they perform in scary masks on stage.

Their song “Before I Forget” won the Best Metal Performance award at the Grammys in 2006.

They’ve had several chart-topping albums – including their sixth and most recent album We Are Not Your Kind, which they released in August.

Their 2020 show will be Slipknot’s first time in Manila, over 15 years after their supposed Manila debut in 2004 was cancelled supposedly due to security concerns, to the heartbreak of hardcore Filipino maggots.

Tickets for their upcoming Manila show range from P2,220 to P6,660, and will go on sale on November 23 at 10 am, through SM Tickets, TicketNet, and AirAsia RedTix. – Rappler.com