Finding my way to Neo City with NCT 127 Facebook Twitter Copy URL
Copied
Everyone has their own reasons for loving certain K-pop groups. I like to believe there's something for everyone in NCT 127's music.

On the day of NCT 127’s first solo concert in Manila, I woke up around 15 minutes before my scheduled alarm. I ate breakfast, put on my all-black outfit I prepared the night before, and painted my eyelids neon green with makeup I had delivered last-minute. Along with my tickets and other personal belongings, I brought a hand-drawn banner and two photocards of my bias – one placed on the back of my phone, and the other in a decorated toploader.

When we got to the concert venue, the nearby buildings and malls were brimming with teenagers and twenty-somethings dressed in bright shades of green, carrying lightsticks, fan-made banners and headbands, and several kinds of freebies.

All of this is new to me because I did not get into K-pop as soon as it became mainstream. I was one of the many stereotypical emo kids who only learned to fully appreciate K-pop later in life, which I find embarrassing to admit. But I like to think I found K-pop at the right time, when I needed it the most. 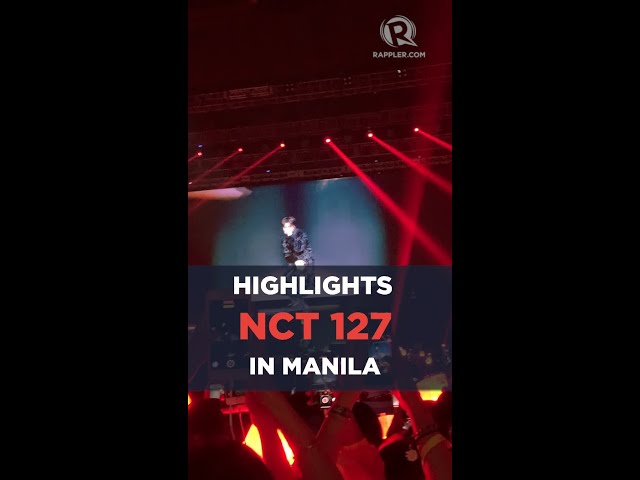 I first got into K-pop when I was in college, listening to groups like SEVENTEEN and EXO, the latter being NCT’s seniors in their entertainment agency. I only became a fan of NCT during the COVID-19 pandemic, after NCT 127 had released Neo Zone and just in time for me to enjoy Resonance.

Everyone has their own reasons for loving certain K-pop groups. NCT 127’s songs are unlike anything I’ve listened to before, and their discography is a fun mix of experimental noise music (which some people, myself included, say is an “acquired taste”) and powerful ballads with beautiful melodies. They can sing about resisting an old flame who’s trying to come back in their lives, or they can sing about making lots of money and wanting to spend all of it. I like to believe there’s something for everyone in NCT 127’s music.

I think another thing that sets NCT 127 apart from other groups I’ve encountered is that they’re so genuine, honest, and real. There were many lonely days I spent at home when I turned to their videos, because they made me feel like I was listening to and hanging out with friends. On one day, I could be tagging along with Johnny and Jaehyun as they make their way around an IKEA store and do dumb things in the showrooms. On another day, I could be listening to Mark and Haechan playfully bicker over who pays for their meal after spending the day in a botanical garden in the United States. I could also watch Taeil teach me how to cook his samgyupsal pasta (which I’ve cooked myself on several occasions) while his clumsy assistants do their best to help him out in the kitchen. As stan Twitter puts it, the members of NCT 127 really are just some guys – in the best way possible.

When it was officially announced that NCT 127 was coming to Manila, I immediately set aside money for tickets – a luxury I couldn’t afford when I was a broke college student – and quickly made plans with my friends. The funny thing is that nothing went according to plan, and I was unable to secure any kind of ticket as they sold out in less than two hours.

I had almost given up on my dream to finally be able to attend at least one concert of any of my favorite K-pop groups. But my friends were so kind as to refer me to reliable people (no to scalpers!) who ended up selling their extra tickets later on, just days before the concert, and I got to secure a solid spot in the VIP standing section on the day of the show.

I remember being a little anxious before the big day, being unfamiliar with K-pop concert etiquette. Am I supposed to learn every single fan chant? I don’t own a lightstick, what am I going to do with my hands during the show? I’m 4’11”, will I still be able to see anything from where I’m standing?

But on the first puku puku pow pow, I scratched my throat dry and all my worries went away. I jumped up and down the moment I first saw the members grace the stage in front of my own eyes. My sister was making fun of how I would casually drop an obscure NCT reference every few minutes and in public, which is something I try very hard not to do in everyday conversations with non-K-pop friends.

There really was something so comforting about being surrounded by people who are just as insane as I am. For the next three hours, in our safe space, we screamed, we cursed, we cried, all while stretching our arms as much as we could to get good shots of the performances on our phones.

For their first ment, some members tried to explain the meaning behind the tour’s name. “THE LINK is…a link,” Mark said sheepishly, which prompted a sarcastic “Oh, really?” from Johnny. Once the crowd’s laughter died down, Mark added, “We’re all connected through the dream, and we experience the dream together.”

“Today, I mark this the day that we connect with Manila Czennies,” Johnny said. “Do you guys feel the connection?” And the crowd answered back with deafening screams.

It’s true, I really did feel a connection that only in-person concerts could provide, and the entire event felt like experiencing one long dream. Getting to see your favorite idols in the flesh is an incredible experience because only a few things in life are better than seeing your bias standing just a few feet in front of you, especially when you’re so used to seeing him on your computer screen. At any given point of the concert, I was either trying to process the fact that the boys were so much more handsome in person, or trying to recover from certain performances that absolutely blew me away.

But I personally felt that the connection the boys were talking about was also about immersing yourself in a community – especially one outside social media, where heated discussions about K-pop can get toxic. In real life, K-pop fans are much more considerate, handing out freebies to several concertgoers, organizing fan cafes and similar initiatives, and generally making sure everyone has a good time.

NCT 127 was also blown away by the energy of the Filipino NCTzen crowd. We sang along to each and every song like our lives depended on it, and my sister and I joked that only Filipino NCTzens would be brave enough to compete with Taeil’s birits. Even Jaehyun, who received the loudest screams of the night, removed his in-ear monitors during his solo performance to hear the audience’s voices, and fans caught him smiling from ear to ear.

During their final ment, the members agreed that they wished they came to Manila sooner, and that they were looking forward to more Philippine shows in the future.

“I’m a little sad because we only had one day for our Manila concert, so I hope that our future concerts will have Philippine shows for two or three days,” Doyoung said in Korean.

“Because of the Manila crowd, we really enjoyed our time tonight,” leader Taeyong said in Korean. “I don’t want to go home, too,” he added, and the fans screamed back.

NCT 127 closed their concert with “Promise You” – a fitting ending for a magical night. Thousands of NCTzens went home that day with their hearts full, holding onto the promise that the boys will find their way back to Manila and meet us again.

As cheesy as it sounds, I’m happy I found NCT 127, because they’ve really been such a great source of happiness for me for the past two years. My first-ever K-pop concert was just as phenomenal as I imagined it would be, and if I could, I would live in those three hours forever. I can’t wait to do it all over again. – Rappler.com