SEVENTEEN. Seven members of the K-pop group have tested contracted the virus.

Facebook Twitter Copy URL
Copied
Hoshi, Seungcheol, Dokyeom, Seungkwan, and Minghao, who were all diagnosed in a span of four days, are experiencing only mild symptoms 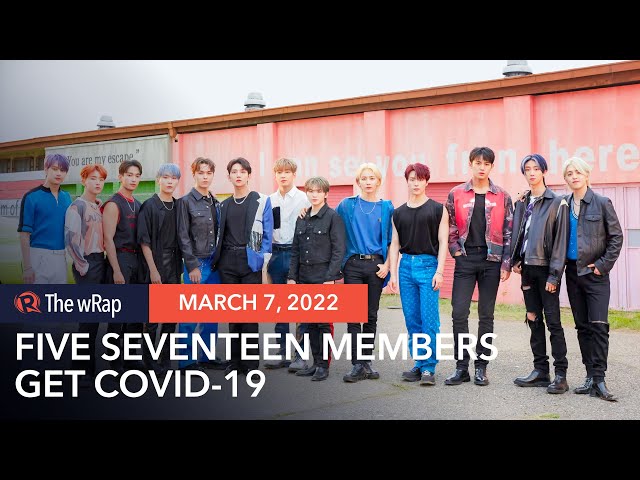 MANILA, Philippines – Five members of K-pop boy group SEVENTEEN will temporarily not participate in the group’s scheduled activities after being diagnosed with COVID-19 over the past week.

Main dancer Hoshi tested positive on Thursday, March 3, after experiencing a sore throat and cough. The group’s agency, PLEDIS Entertainment, assured fans that he is currently not showing any severe symptoms and is recovering from home.

On Saturday, March 5, leader S.Coups was confirmed to have contracted the virus. The agency said that the rapper’s only symptoms were a cough and stuffy nose.

On Saturday evening, PLEDIS Entertainment again released a statement, this time to announce that members Seungkwan and DK were also positive for the virus. They said that DK took a PCR test after experiencing a mild sore throat, while Seungkwan took both rapid antigen and PCR tests after experiencing body aches.

On Monday, March 7, PLEDIS announced that The8 is the recent SEVENTEEN member to be diagnosed with COVID-19. The dancer took a PCR test on Saturday after experiencing a very mild cough. He’ll be administering self-treatment at home.

The agency added that the rest of the members, who weren’t diagnosed with COVID-19, had taken self-test kits and the results had all come back negative. They were also not exhibiting any symptoms.

Aside from Hoshi, S.Coups, DK, Seungkwan, and The8, members Wonwoo and Vernon had also tested positive for COVID-19 in February, and both have made a full recovery since.

Following the members’ diagnosis, fans on Twitter have been appealing to reschedule the group’s activities to focus on their safety instead. SEVENTEEN is set to return to in-person concerts with their sixth fan meeting, SEVENTEEN IN CARATLAND, on March 25 to 27.

SEVENTEEN is a 13-member boy group that debuted in May 2015 under PLEDIS Entertainment. They are known for their hits “Don’t Wanna Cry,” “Home,” “Very Nice,” and “Home;Run.” Their albums Attacca and Your Choice placed third and eight, respectively, on IFPI’s Global Album Sales Chart for 2021 worldwide releases. – Rappler.com