MANILA, Philippines – On Sunday, March 18, Catriona Gray won the title of Miss Universe Philippines 2018 before a big crowd at the Smart Araneta Coliseum.

A fan favorite from the beginning of the competition, Catriona walked home with the lion’s share of awards, nabbing the Pitoy Moreno Best in National Costume, Jag Jeans, Best In Long Gown, and Best in Swimsuit awards. (FULL LIST: The official candidates of Bb Pilipinas 2018)

Here’s a look back at Catriona’s journey.

Catriona confirmed she was joining Miss World Philippines 2016 (The competition to represent the country in the Miss World pageant was then a separate competition from Bb Pilipinas). In an interview with Rappler, she said her decision to join the competition was a surprise back then.

“I don’t know. I was even kind of surprised myself. I didn’t expect it because I kind of look at the whole pageantry thing in a certain light before. And all of a sudden, parang overnight, I saw it in a different perspective and I looked at it as the heart of it is the advocacy. So that’s what made me fall in love with it. So that’s why I’m joining Miss World,” she said. 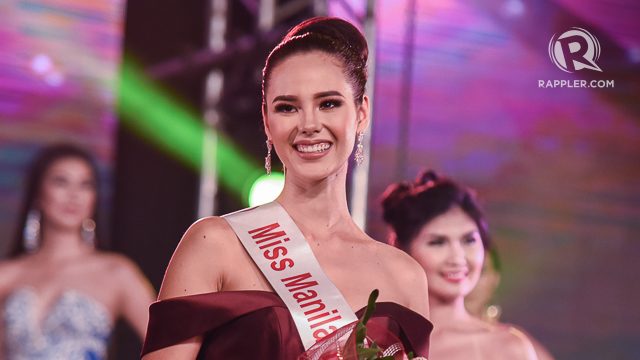 Many fans believe that Catriona was fierce competition during the Miss World pageant. She performed well during the talent competition and won the multi-media award.

During the Q&A, Catriona was asked by Miss World 2015 Mireia Lalaguna, “Which qualities do you think it will take to wear my crown?”

“I think first of all, it takes bravery. To be a Miss World is to carry a burning torch. It is like action carried out by one to illuminate the lives of many. And I would dedicate my whole self, my love for the arts, and my voice to trying to uplift, empower, and educate people. And it would be my greatest honor and duty to hold this torch high enough so that all the world could feel and see its light,” Catriona said.

She ended her journey in the competition as part of the Top  5, winning 3rd runner-up in the pageant.

During the launch of the new Miss World Philippines Organization, Rappler got a chance to talk to Catriona about her plans as she was set to crown her successor. Aside from concentrating on her modeling and music career, Catriona was asked if she was opened to the possibility of joining another pageant.

“I’m keeping my mind open to it but there [are] no plans yet,” she said. At the peak of the application process for the Bb Pilipinas pageant, reports started to circulate that Catriona was set to throw her hat (or crown, as the case may be) into the ring again. True enough on January 8, Catriona came to the BPCI office and submitted her form, with fans eagerly awaiting her appearance.

Unsurprisingly, Catriona made it to the official line up of candidates for the pageant. After two months of pre-activities, 6 ladies became queens on Sunday, March 18. Catriona was the darling of the crowd, winning almost all the special awards. She was glowing as she walked onstage, wearing a gown by Mak Tumang with her 3 Stars in the Sun ear cuff.. But it was the Q&A that made everyone truly root for for her. US ambassador to the Philippines Sung Kim asked her, “After the devastating war, Marawi is now on its way to recovery. What is your message to the young women of Marawi?”

“My answer and message to the women [of Marawi] is to be strong. As women, we are the head of the household. And, we have amazing influence not only [on] our own families – as mothers, sisters, and friends – but also [on] our community. If we could get the women to stay strong and be that image of strength for the children and the people around them, once the rebuilding is complete, the morale of the community will stay strong and high,” she said.

After an hour’s deliberation, the winners were announced and Catriona won the title of Miss Universe Philippines. Get ready Universe, Catriona is about to take you by storm. – Rappler.com