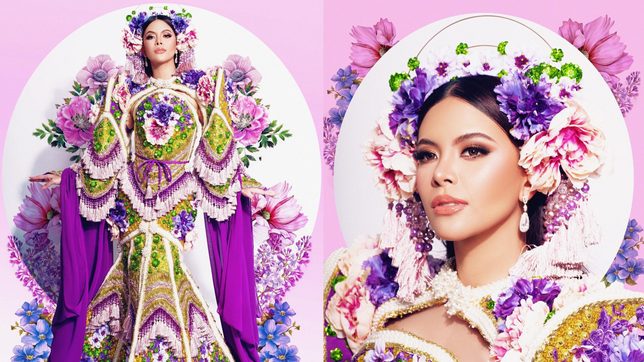 The colorful ensemble, which was unveiled on Tuesday, December 14 at the pageant preliminaries in Puerto Rico, sees the 28-year-old Cebuana beauty queen in a stunning full-body piece embellished with flowers, tassels, and pearls.

Axel Que, the same designer behind Miss Universe Philippines 2021 Beatrice Luigi Gomez’s “The Golden Lunar Dragon” ensemble, said that the creation was inspired by the mythological character “Mayari” the Moon Goddess, a daughter of Bathala.

“Hailed as the most beautiful deity, she has complete dominion of the world at night. The moon has been revered as a celestial being by most ancient civilizations in antiquity. Apart from its mysterious allure, it has also been thought to have great cosmic influence on the mortal realm,” Tracy described in an Instagram post.

Axel added that their rendition “incorporated a lot of traditional forms as the base silhouette, with slight exaggerations in the proportion and volume.”

The ensemble was completed with jewelry made by Christopher Munar and shoes by Jojo Bragais.

Tracy is currently in Puerto Rico for the Miss World pageant. On December 10, just several days before she unveiled her “Mayari” ensemble, Tracy secured a spot in the Top 30 after winning the Head to Head fast-track challenge.

The coronation night is scheduled on December 16 (December 17 in Manila). Tracy is vying to be the second Filipina to win the Miss World crown after 2013’s Megan Young.  – Rappler.com