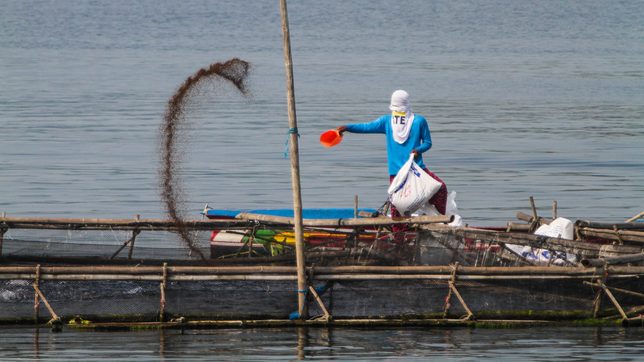 FISHING. Life goes on for fishpen caretakers as they continue their normal day routine of feeding fingerlings at the Taal Lake in Agoncillo, Batangas, on July 2, 2021, a day after the phreaeomagmatic eruption of Taal Volcano.

With the Philippine archipelago comprising more than 7,000 islands, fishing has always been an important source of livelihood for Filipinos.

Fisheries, agriculture, and forestry form a major economic sector in the Philippines. In 2020, the Philippine Statistics Authority pegged total fisheries production at more than 4.4 million metric tons – although around a third of this is seaweed production, most of which do not usually end up as seafood.

While the government has taken steps toward implementing sustainable fishing, illegal and harmful techniques continue to persist in the archipelago.

Here are some things to know about different fishing practices in the Philippines.

Handline, or hook and line gear fishing, is a traditional fishing method. When it comes to fishing, this method is likely the first image that comes to mind: a fisherman uses a vertical rod with a bait to deceive fish into biting the hook.

Handlining is seen as a sustainable way to catch fish. Some tuna fishers in the “tuna capital of Luzon” – Tiwi, Albay – have resorted to this method to help conserve fishery resources in the area and ensure continued abundant supply.

The Bureau of Fisheries and Aquatic Resources (BFAR) defines aquaculture as the breeding and farming of fish and other fishery species in fresh, marine, and brackishwater (mix of freshwater and seawater) areas. Among others, this can take the forms of fish cages, fishpens, fishponds, and mollusk ponds.

This is a major fish production practice in the country – from January to March 2021, aquaculture had the largest share of output in Philippine fisheries at 53.7%. During that period, more than 525,000 metric tons of harvest came from aquaculture farms – most of which were seaweed (65%).

When not done properly, aquaculture can cause water deterioration, disease outbreak, and danger to native species. However, the BFAR in a 2001 administrative order has set guidelines to ensure ecological and social protection in aquaculture farms.

The BFAR also released in 2007 a guidebook to help local governments address the negative environmental impacts associated with aquaculture. It is an educational publication that gives an overview of aquaculture in the Philippines, and outlines local and national aquaculture management policies.

Fish farmers have been making use of sustainable management practices that keep aquaculture non-detrimental to fish populations. These include organic aquaculture and aquaculture based on carrying capacity.

Meanwhile, environment and sustainability researchers from different parts of the world crafted a “wheel of sustainability” that they suggest can be used as a tool when creating certification schemes for aquaculture firms.

In some areas like the Zamboanga Peninsula and Palawan, Philippine authorities implement annual fishery closures to prevent overfishing. Overfishing happens when fish are caught faster than they are able to reproduce.

For instance, in the Zamboanga Peninsula’s annual fishery closures, a conservation area is closed for commercial-scale harvests of sardines for three months every year.

The International Union for Conservation of Nature noted that the fishing of Bali sardinella in Zamboanga became more sustainable because the government began implementing these closures beginning December 2011.

In Balayan Bay in Luzon, fishers, vendors, and consumers have noticed an increase of juvenile sardines in the market right after the seasonal closure period, according to a report from the Ecosystems Improved for Sustainable Fisheries, a five-year USAID-supported project that ended in 2017.

Despite the success stories, some experts see these annual closures as insufficient in themselves. They need to be combined with other management measures that aim to reduce the fishing effort, increase the resilience of spawning stocks, and protect coastal habitats.

Those measures include preventing the intrusion of commercial fishing vessels in municipal waters, keeping 15% of municipal waters protected, registration and licensing based on reference points and harvest control rules, as well as addressing climate impacts on the survival and resilience of fish stocks.

The USAID said the Balayan Bay closures initially led to 3,000 fishing boat crew needing economic support. However, after the government enrolled them in cash-for-work programs, the crew were able to continue having livelihood and food security. The success came about due to the collaborative efforts of government units – from local to national – along with the private sector. Fine mesh nets are nets or webbings with mesh sizes less than three centimeters, measured between two opposite knots of a full mesh when stretched.

When these are used, because the meshes or holes are so small, these can catch plenty of juvenile fish.

The Philippines has outlawed the use of fine mesh nets since 1986 except for certain species of fish. However, illegal fishers sometimes circumvent the rules by using two or three layers of nets with legal mesh sizes, effectively reducing the mesh size.

To address this, some local governments prohibit the use of double/triple gillnets or trammel nets.

While fishers may use regulated options like purse seine nets, which are not harmful per se, these can still be the cause of overfishing. Purse seines are a large wall of a net cast over an entire area or a school of fish.

Purse seines are active gears, which means they are used based on an aimed chase of the target species (in contrast to traps, which passively wait for catch). Active gears are prohibited in Philippine municipal waters because of their potential to overfish and harm the environment.

Fishing with explosive or poisonous substances

In fishing with improvised explosive devices or IEDs, fishers drop explosives into waters, killing and injuring fish and other marine animals. IED fishing also destroys coral reefs and the eggs and larvae of adult fish.

The shock waves may also rupture the swimbladders of fish, which also contribute to their eventual death.

Despite being illegal, the practice still persists, experts say. Some illegal fishers make use of poisonous substances such as cyanide to catch fish easily. Fishers or divers crush cyanide tablets into bottles of water and squirt the solution onto coral heads, crevices, or even fish themselves.

According to the World Wide Fund for Nature, this stuns or weakens the fish without killing it, making it easy to catch in a net or even by hand. Corals exposed to cyanide also die.

Cyanide fishing is dangerous not only to the fish but also to fisherfolk. On August 13, investigators suspected that the deaths of a boat captain and his three crew in Zamboanga were caused by cyanide poisoning while they were on the vessel.

Bottom fishing or trawling is a method where huge bag-shaped nets are dragged along the seabed, usually to capture bottom-dwelling species. But because this method is essentially non-selective, bottom trawling catches everything it comes in contact with, destroying habitats.

Trawls are often used to catch shrimp and squid, but they end up dragging urchins, sea turtles, and more.

According to Oceana, much of the bottom trawl catch are baby fish, contributing to overfishing.

In November 2018, the Department of the Interior and Local Government and the BFAR signed a joint memorandum circular providing guidelines for strengthening the implementation of the ban on bottom trawl operations within municipal waters. – Rappler.com