Facebook Twitter Copy URL
Copied
The play is set 19 years after the events of Rowling's seventh and final book, 'Harry Potter and the Deathly Hallows'

LONDON, United Kingdom – Harry Potter fans were buzzing with excitement Saturday, July 30 ahead of the opening gala of Harry Potter and the Cursed Child, a stage play that imagines the fictional boy wizard as a grown-up father of three. (LOOK: Harry Potter, Ginny, Albus Severus in new ‘Cursed Child’ photos)

After nearly eight weeks of preview performances that received rave reviews from critics, the Palace Theatre in London throws open its doors to the general public for a new adventure in the saga that has captivated millions around the globe.

Creator J. K. Rowling has begged fans not to give away any plot details after seeing the show.

Set 19 years after the events of Rowling’s seventh and final book, Harry Potter and the Deathly Hallows, the play sees a grown-up Potter working at the Ministry of Magic.

The official plot outline for the play reads: “While Harry grapples with a past that refuses to stay where it belongs, his youngest son Albus must struggle with the weight of a family legacy he never wanted.

“As past and present fuse ominously, both father and son learn the uncomfortable truth: sometimes, darkness comes from unexpected places,” it said.

Albus actor Sam Clemmett has been a big hit, as has Anthony Boyle as Draco Malfoy’s son Scorpius.

The script will be released in Britain at midnight on Saturday (2300 GMT), with bookshops planning to stay open into the wee small hours to satiate the desires of Potter fans. July 31 is the birthday of both Rowling and Potter.

Rowling’s books have sold more than 450 million copies since 1997 and been adapted into 8 films.

The theatre show is written by English screenwriter and playwright Jack Thorne, based on an original story co-written with Rowling and the play’s director John Tiffany.

Given the millions of fans around the world, the decision to move the characters on two decades was seen as risky.

Like many of his fans, Potter has now grown up and has 3 children with his wife Ginny Weasley, the sister of his friend Ron.

He still has his trademark round-rimmed glasses and the scar on his head, a permanent reminder of his nemesis Lord Voldemort, but must now help his youngest son Albus confront the family’s dark past. 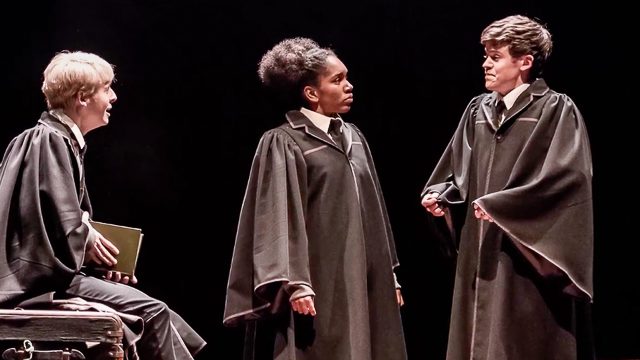 Harry Potter and the Cursed Child is currently sold out, but another 250,000 tickets are set to go on sale next week as the play’s run has been extended until December 2017.

“Judging by the whooping and cheering, nobody was disappointed,” Clare Fitzsimons wrote in the Daily Mirror newspaper after the first preview showing last month.

“The storyline, a hymn to friendship and teenage misfits, contains enough twists to please the most knowledgeable of fans,” Hannah Furness wrote in The Daily Telegraph.

“Any fears that the world of Hogwarts on stage would struggle to compete with the multimillion-dollar special effects of film were quickly kicked into touch.” – Rappler.com