Jun 2, 2012 7:48 PM PHT
Arnel Capili
Facebook Twitter Copy URL
Copied
To be bitten by the travel bug can — at times — be troubling, because it changes you forever. MANILA, Philippines – We have been cursed!

According to locals, once you’ve been to Palawan, you will keep on coming back. I have not believed in any ‘curse’ until I learned about the Palawan curse. You have been warned. Make no mistake, this curse is 100% true!

I am an OFW based in Dubai and I was able to convince one of my work colleagues, an Egyptian, to come and visit the Philippines. Well, he is a diver and he wanted to try the waters of the Philippines. I could not think of any place in the Philippines that would impress him as he has dived in some of the world’s best dive spots such as the Red Sea so I decided to bring him to El Nido, Palawan. Admittedly, this trip is also a first for me.

The trip bordered on the unbearable because of the long and tortuous 7-hour drive from Puerto Princesa. Not to mention, the chaotic, mismanaged two hours delay of a local carrier.  I guess these are the things you have to endure…birth pains kumbaga, but once you set foot on this paradise, every ache, every pain, every bump is forgotten. 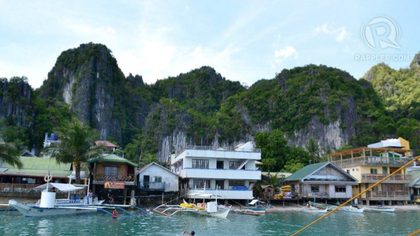 Contrary to popular belief, travel to in El Nido is not really that expensive. We actually got a beach front room for P 1,600 – to think that summer is peak season!  We hired a boat that was exclusively for us for less than P 3,000 and this includes kayaking, snorkeling and of course, a sumptuous lunch of grilled seafood, BBQ chicken and oh so sweet mangoes in a deserted cove!

To say that El Nido is paradise on earth is an understatement. And this is not an exaggeration, you really have to see it to believe that it could possibly be the last place you would ever want to see before you crossover to the next dimension. We are back in Dubai and my Egyptian buddy, is not only planning to  return, he is actually thinking of settling down with his family and opening a little dive shop. Seriously, he wants to spend the rest of his life in this tiny town called El Nido. That’s not a bad idea…

We have been cursed. – Rappler.com

(PH Travel is the home of wanderlusts constantly discovering the beauty of the Philippines through a shared love for recreation, food, sports, shopping, traveling, or the environment. This is where communities come together to share their stories and adventures — whether they’re into surfing, diving, yoga, mountaineering, hiking, rock-climbing, sailing, eating, cooking, responsible tourism. You name it, you can share it. Send us your stories, photos, and videos with subject heading PH TRAVEL to desk@rappler.com.)