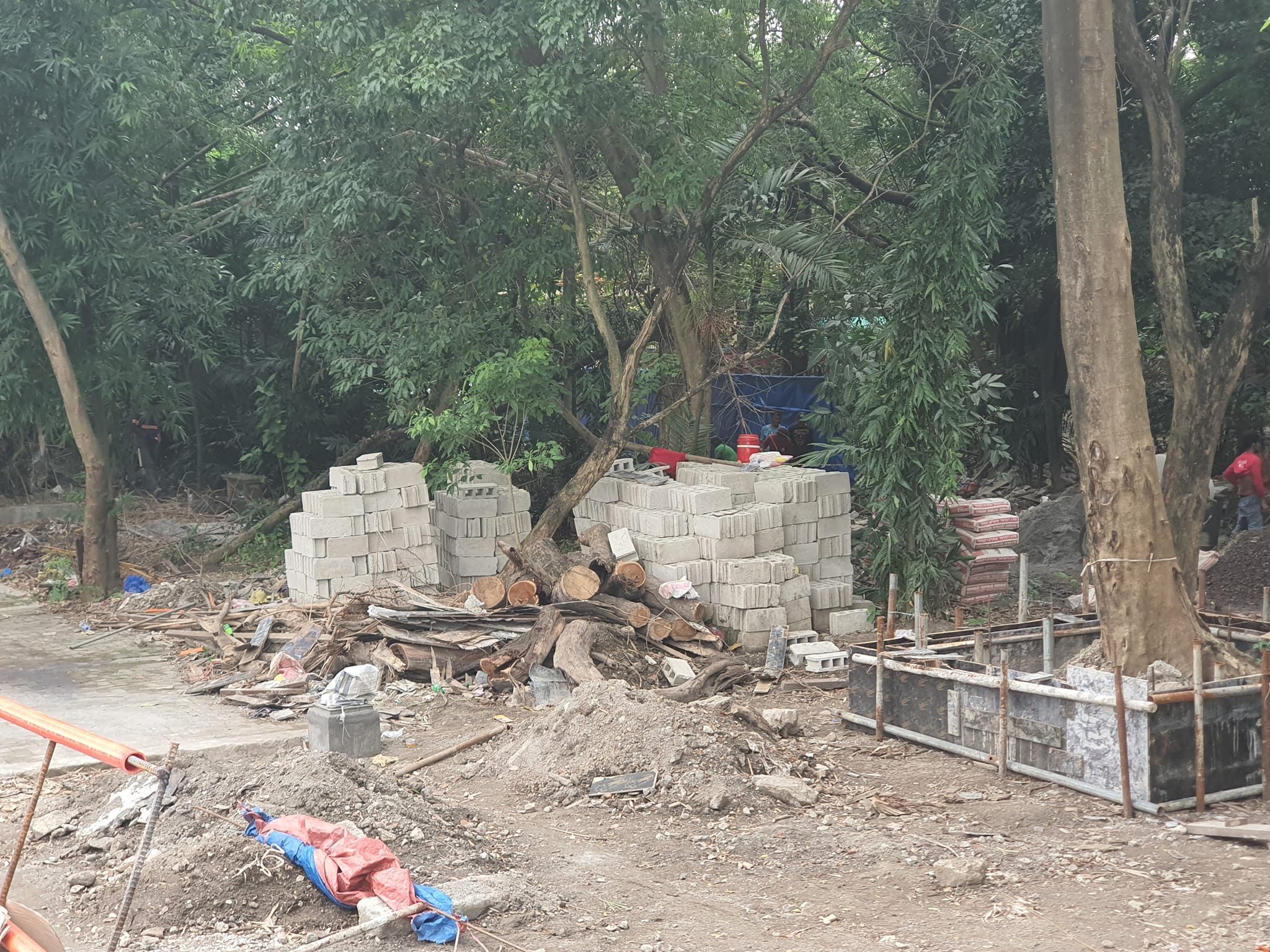 CONSTRUCTION ONGOING. The remains of a tree are shown with concrete blocks inside Arroceros Forest Park.

The ongoing construction is supposedly part of the Manila government’s “redevelopment” project for the park, which supposedly includes the addition of elevated pathways, paved areas, and other amenities.

The redevelopment started on September 8. At the project’s groundbreaking ceremony, Moreno said that nothing would be taken away from the park.

(You will witness the full redevelopment of 2.2 hectares of Arroceros Park. It will not disappear, nothing will be taken away. The rocks we are standing on will be part of a more beautiful Arroceros Park, our legacy to our children and future generations.)

However, the Save Arroceros Movement – a coalition that has advocated for the park’s protection for years – expressed concern that the redevelopment has affected the park’s biodiversity.

After a visit to the park on November 12, they noted that the new concrete structures cover about one-fifth of the park, “undoubtedly killing trees, plants, and other wildlife in the process.”

“The forest park, small as it is, is a haven for Metro Manila residents to experience the peace and serenity of a forest – complete with the sound of birds and insects, and the beauty of fallen leaves, flowers, and fruits under a lush green canopy,” they said in a manifesto released on Tuesday, November 16.

“With natural regeneration occurring, various plants germinated on their own while animals started to make it their home as it simulated their natural habitat, adding to the biodiversity of this small area inside the Philippines’ capital. We are concerned that the ongoing redevelopment effort of the Manila LGU has already harmed the biodiversity of the park.”

They said that while they were not against redeveloping the park, they said that the current project was done without discussions with concerned groups.

“No consultations were undertaken with partners and environmental groups as required by Ordinance 8607, despite numerous attempts by various groups such as Winner Foundation, Manila Doctors Hospital, and Philippine Native Plants Conservation Society Inc. for a meeting with Manila local government officials,” they said.

The group was referring to City Ordinance No. 8607, which was signed by Moreno in February 2020, declaring the park as permanent and ending a long tug-of-war between the area’s caretakers and the Manila government, the latter of which through the years has eyed the property for various uses.

Moreno said at the time that the city would allocate P1 million for the park’s operation, that it would assign “peace officers” for the park, and that it would create a governing committee that would formulate plans for it.

The ordinance also prohibits cutting trees, dumping waste, and any form of excavation in the area.

Save Arroceros Movement urged the Manila government to stop the redevelopment project.

“We are calling on the Manila LGU to STOP the Arroceros Urban Forest Park Redevelopment Project and come out with a REVISED design and construction approach that will minimize further destruction of the forest area and help to start restoration of the forest environment inside the park, in CONSULTATION with environmental partners and civil society,” they said.

Arroceros Forest Park was started in 1993 by the Winner Foundation, a group of women from Manila, who would later be designated as the park’s caretakers.

The park is home to 1,567 trees of 81 different species, and has also been a haven for 32 different bird species. It has often been called “Manila’s Last Lung.” – Rappler.com