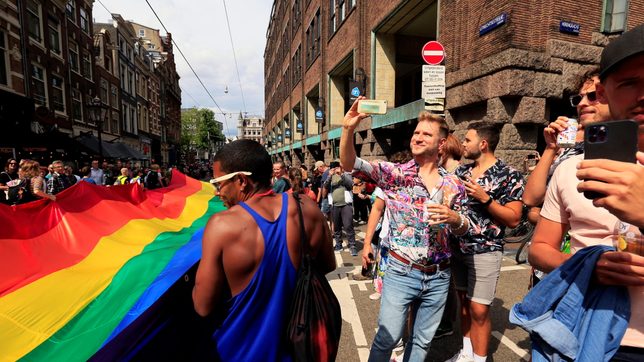 Amsterdam capped a month of events commemorating the 25th anniversary of its first Gay Pride festival with a “Pride Walk” through the city’s historic centre on Saturday, August 7, that drew around 10,000 participants carrying flags and an enormous rainbow banner.

Usually one of the biggest events of the year in Amsterdam, the festival has traditionally ended with a flotilla along the city’s canals, with parties, music and dancing on the boats, quays, and in bars and people’s houses. But the canal parade was cancelled in 2020 and again this year due to the coronavirus pandemic.

Saturday’s Pride Walk was billed as chance for Amsterdammers to not just have a party but to actively participate and show their support for LGBT rights under threat in the Netherlands and around the world.

Amsterdam “was a gay paradise 25 years ago and we have to get that back,” he told local broadcaster AT5.

Flags from 71 countries around the world where homosexuality is a crime lined the route, together with a sign describing grim punishments prescribed for those convicted.

Despite the event’s serious message, participants wore colourful outfits and marched to cheers, whistles, chants, and drums as they passed through the city’s streets.

The Gay Pride festival in Amsterdam usually draws half a million participants and viewers. – Rappler.com