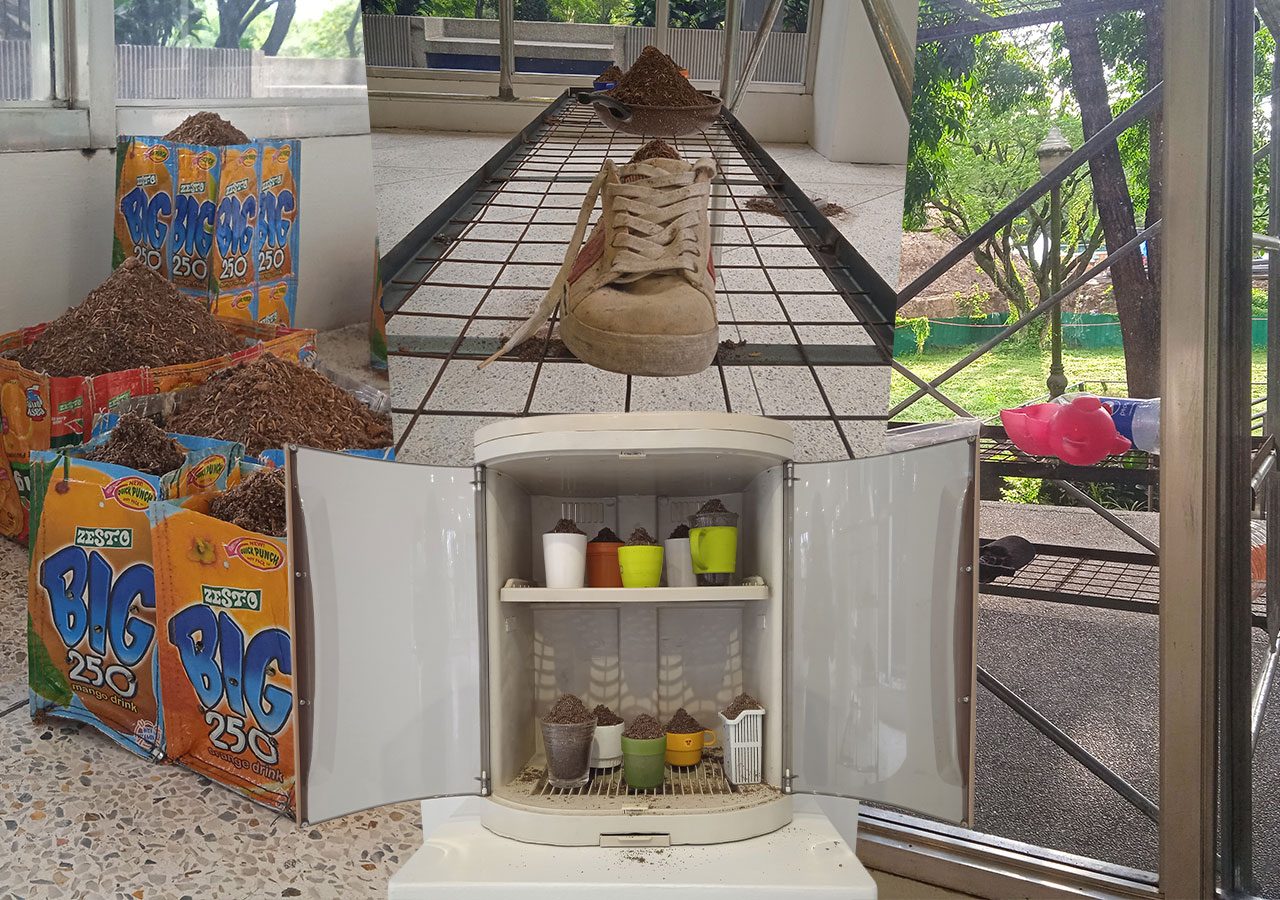 Facebook Twitter Copy URL
Copied
'Fertile Land is the result of art made not from imagination, expression, or even necessarily from beauty, but from involvement and connection'

Upon entering the main gallery of the Vargas Museum, one is immediately confronted by “Sifting Sand and Soil,” an intermedia installation that uses found objects, repurposed as containers for potting soil, mixed from the silt gathered from the Marikina river banks. A video on the far end of the gallery shows four men sifting this soil mix, separating trash, gravel, and debris, and the rhythm of dirt being sieved accompanies the viewer as they move through the work. In another corner of the room, an empty dollhouse lays open on a bed of dirt, poignantly evoking the work’s inherent contradiction: that while dirt may be worthless, few things are more precious than land.

Nathalie Dagmang, whose art practice exists between collage, multimedia, education, and community organizing, was anxious about opening her solo exhibition, Fertile Land, with this outwardly conceptual display – one that could easily invite confusion at best, ridicule at worst.

Indeed, viewers may be struck by how many of Fertile Land’s spaces are occupied by found objects: a frequent target and punchline of the art world. One popular sitcom clip-turned meme-turned .gif that both critiques and pokes fun at the genre shows Danny DeVito in a white wig playing his It’s Always Sunny in Philadelphia alter-ego, art collector Frank Ongo Gablogian (a play on both gallerist Frank Gagosian and pop artist Andy Warhol). In the clip, Gablogian waddles through the gallery dismissing each of the pieces installed on its walls, before coming upon the air conditioner in the middle of the floor and proclaiming, “That. I love. I absolutely love.”

As with conceptualism, social practice (the genre Dagmang works in) negotiates the difficulty of documenting the artistic process, while arguably taking a step further by rooting one’s practice in community engagement. A cursory glance at “Sifting Sand and Soil,” with its makeshift containers of dirt, might produce the same kind of cynicism or the reductive take that “anything can be art,” or “anyone can be an artist.” Dagmang however trusts that the viewer will use the museum space to reconsider what is on the pedestal (or in this case, the scaffolding): thinking instead of these everyday objects as objects of tension.

Whatever anxieties Dagmang had were later assuaged by the ease with which the work was received by the residents of Bgy. Tumana, who Dagmang was touring around the exhibition on the day that I visited. Her involvement with them is personal as well as professional, going back to 2016, when she produced her BFA Thesis, Dito sa May Ilog sa Tumana: A Sensory Investigation on the Contradictory Relationship of Barangay Tumana with the Marikina River, for the UP College of Fine Arts. The installation, which combined video and found objects, namely rubber slippers fished out of the Marikina River, shares the same genetic makeup as Fertile Land.

It would however be incorrect to call Fertile Land a revisiting of the subject, in that Dagmang never really left the community. Aside from the community garden initiatives on view at the Vargas, Dagmang has also led relief drives for those compromised first by the constant flooding, and then by the COVID-19 pandemic. After the exhibition closes, the steel scaffolding she used to mount her repurposed containers will be donated to the community for future gardening projects.

2016 did not only mark the beginning of her immersion among the residents of Tumana, it was also the year she began volunteering for Gulay sa Barangay – a pocket garden that eventually became a full-scale demo farm. However, as Gulay sa Barangay grew, its participants were forced to halt the project due to growing tensions between the community and the owner of the property, over what was supposed to be a temporary project. Ending the project while it was at its peak forced Tumana’s leaders to improvise an alternative, bringing forth the container gardening workshops at the center of Fertile Land.

Such a backstory imbues the exhibition with a quiet melancholy – the sense that something is not quite right despite the broadly accepted notion of urban gardening as a net positive and a symbol of a community’s resiliency (a term which has been subverted in the years since Dagmang began her work with the Tumana residents). This is elaborated further by “Interruptions,” a collection of printed texts and images laid out on a long wooden table in the center of the Vargas’s West Wing gallery. “Interruptions,” which narrates and illustrates life along the river, tells its story from the ground through photographs and ephemera circulated among everyday people; and from above, through maps, statistics, and diagrams.

As a resident of Marikina herself, Dagmang bears intimate witness to life along the river banks. Having immersed in Tumana by documenting the barangay’s activities and projects since 2016 has shifted her perspective on community work, prompting further reflection on the process of “slow ethnography.” Slow ethnography negates the objectivity and detachment typically expected of researchers, making space instead for connection and relationality. It is a practice that reflects on what it might mean to make art not about or even for somebody, but with and alongside them. This shift has since undone what Dagmang calls her “naive” preconceptions about community work. It has also collapsed how she differentiates between the audience, the public, and the community.

“Pag-iniisip ko kasi ang audience at community, most of the time pareho lang yon (When I think about the audience and the community, most of the time they are one and the same),” she explains. “Siguro conscious din kasi ako na masyadong ma ‘other’ ang community. For example, sa Tumana, although siyempre iba ang experience nila from the viewer, yung pagbabaha ay lahat dinadamay (I might also be overly-conscious of ‘othering’ the community. For example, for [the residents of] Tumana, even if their experiences differ from [the experiences of] the viewer, flooding still affects us all).”

Fertile Land is the result of art made not from imagination, expression, or even necessarily from beauty, but from involvement and connection. One could eventually argue that this practice produces the utopian imperative that has come to be expected of artists. Bypassing notions of conventional beauty through her work, Dagmang sheds light on how art and artists help us imagine the world we want – taking a detour first, by showing us what is amiss in this one.

The spaces at Vargas exhibit what it takes to create arable land, which might in turn sustain plant life, which could then feed the hungry. The barrenness of the space and spareness of the displays however express Dagmang’s cautiousness and sentiments around the hope generated by the life-giving act of container gardening. Instead, these express a contradiction of the present, wherein something meant to symbolize hope can also represent systemic failure. – Rappler.com

“Fertile Land” runs on the ground floor galleries of the University of the Philippines Jorge B. Vargas Museum and Filipiniana Research Center until October 22, 2022. The Vargas Museum is open from Tuesdays to Saturdays from 9 am to 5 pm.

To visit the museum, you may book an appointment using the “Book Now” tool on the museum’s Facebook Page @vargasmuseum.upd, or reach out to them on Instagram @upvargasmuseum or email. For updates on events, exhibitions, and advisories, check the website.