Must be love: the Tokyo ‘clinic’ treating stuffed toys 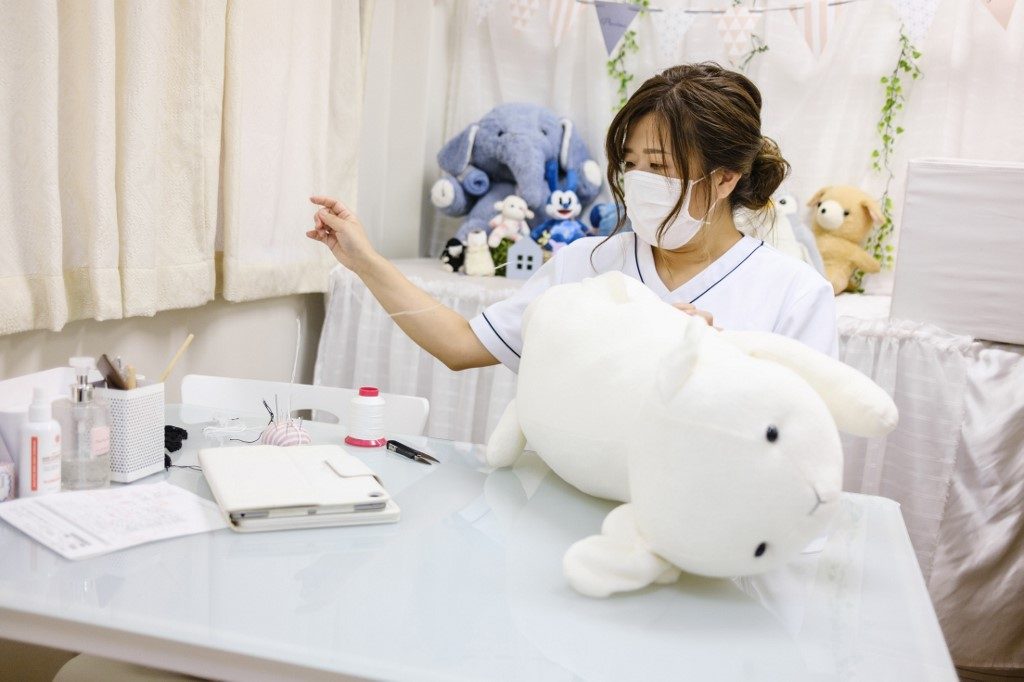 At a Tokyo clinic, a woman in a white coat carefully records the particulars of the newest patient: a sheep-shaped stuffed toy.

The Natsumi Clinic specializes in restoring much-loved teddies and other cuddly toys to their original glory, delighting deeply attached owners like Yui Kato, who brought in the sheep, Yuki-chan.

“I thought I had no choice but to throw her away as she’s absolutely worn out, but then I heard there’s a hospital that deals with this sort of thing,” the 24-year-old told AFP.

“Maybe she won’t be exactly how she once was, but I came here hoping to see her healthy again.”

She began treating stuffed toys 4 years ago in her hometown, northern Sendai city, after working at a clothes alteration shop where customers often asked if she could repair their treasured toys.

“Customers saw stuffed toys as family members, partners or best friends, not mere objects. After their stuffed toys were fixed, many of them hugged (the toys), or burst into tears,” Hakozaki said.

The experience inspired her to open a shop offering specialized treatment, and every animal is prescribed its own course.

For Yuki-chan the sheep, Hakozaki first removed the stuffing then bathed her with a special soap, which she described as a “spa” treatment.

The clinic carefully documents each stage of the treatment, posting images online so owners can keep tabs.

Hakozaki is conscious of how attached people can become to their stuffed animals, and considers it key to treat the toys as if they were alive.

“It looks like she was very tired. Please relax and enjoy!” the clinic captioned a photo of Yuki-chan soaking in a foamy bath.

Yuki-chan was in such bad shape that she needed to be virtually reconstituted from scratch. The bath returned her tattered skin to its original shape, allowing Hakozaki to use it to pattern new fabric.

Once sewn together, the fabric was filled with fresh stuffing, effectively creating an entirely new Yuki-chan, except for the “heart” – fashioned from pink cloth and filled with a bit of original stuffing.

Hakozaki sees it as a way of transferring the toy’s “soul” into the new body.

The 34-year-old moved her business to Tokyo two years ago, and now repairs 100 stuffed toys a month with 5 other “doctors”.

Clients have sent toys from Hong Kong, Taiwan, France, and Britain for treatment, and customers have had to wait up to a year for a spot.

Repairs take about 10 days, and the clinic’s website features pictures of recovered “patients” photographed together at “a party to celebrate being discharged.”

Yuki-chan’s makeover cost Kato 100,000 yen, but for her it was money well spent.

“My memories (with her) are more important than money, so I don’t regret it,” she said, recalling the “tough times” the stuffed sheep helped her get through.

“I talked to her when I went to sleep to sort out my feelings and I used to cry in front of her,” she said.

‘Beyond just a thing’

She said she cried again, but this time tears of joy, when she saw photos of Yuki-chan’s transformation, and was delighted when she came to pick up her old friend.

“I’m genuinely surprised!… She’s back to like she was when I got her for the first time,” she said.

“She has a ‘heart’ of stuffing inside, so she has a new look but a part of the memory is still in her,” Kato added.

“I’m so happy I can keep the memories with me.”

“She saved me when I was under pressure at work… she forgives me and accepts me,” he told AFP, adding that his wife and son also adore the otter.

Sano admitted he sometimes feels embarrassed about his affection for the toy, but noted that traditional Japanese folklore says objects can acquire their own spirit.

They “can go beyond just being a thing and possess personality,” he said.

And Hakozaki understands the feelings owners have towards their toys.

“We don’t just replace a father because he got sick. It’s the same thing” for stuffed toys, she said, describing the attachment as something “universal.”

“There are people who consider their stuffed toys as family members not only in Japan but also around the world.” – Rappler.com