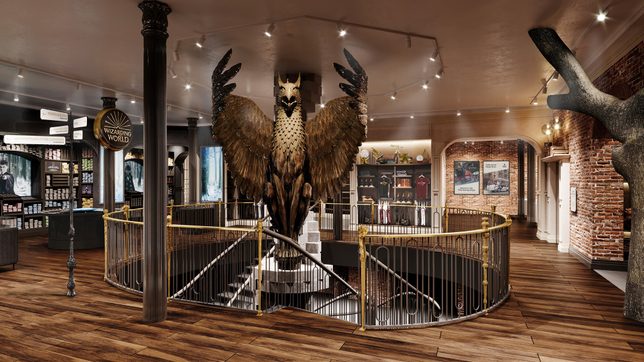 The first Harry Potter flagship store in the world will open its doors in New York City on June 3, the shop announced on its Facebook page.

The April 23 Facebook post shared photos of the shop’s immersive interiors, including statues of iconic symbols and characters, as well as shelves of exclusive merchandise, clothing, collectibles, toys, wands, and more.

The photo-ready attraction will boast the famous London phone booth that leads to the Ministry of Magic. There is also a Honeydukes-inspired area of the well-known chocolate frog and other sweet treats, as well as the House of MinaLima housing a gallery of graphic art from the famous film series.

Shoppers can also sign up for the Harry Potter Fan Club app where they can scan Enchanted Keys around the store and bring the Wizarding World to life. Personalized memorabilia will also be sold, including an engraved wand of your choice, an embossed journal, and even an embroidered robe with the house and name of your choice.

Over 50 New York-exclusive wands inspired by different characters and locations will also be available to buy.

Guests are required to scan a QR code at the physical store to join the virtual queue. Once they’re off the waiting list and can visit, guests will be notified via phone.

Harry Potter is a fantasy series of 7 novels that follow the life of young wizards Harry Potter, Hermione Granger, and Ron Weasley as students of Hogwarts School of Witchcraft and Wizardry. It was written by British author JK Rowling. The first book, Harry Potter and the Philosophers’ Stone, was published in 1997, and its film adaptation was released later on in 2001 starring Daniel Radcliffe, Emma Watson, and Rupert Grint. The book and movie series ended in 2007 and 2011, respectively.

The Harry Potter franchise has garnered significant success more than a decade after the last Deathly Hallows film was released, spurring commercial success and a cultural movement that created themed attractions in various Universal Studios amusement parks around the world. – with reports from Andrea Tibayan/Rappler.com

In the mood to reread Harry Potter? Get the books online using this Lazada voucher code.

The National Museum of the Philippines launches new website