‘This is not terrorism’: Filipinos take to the streets after anti-terror bill hurdles Congress 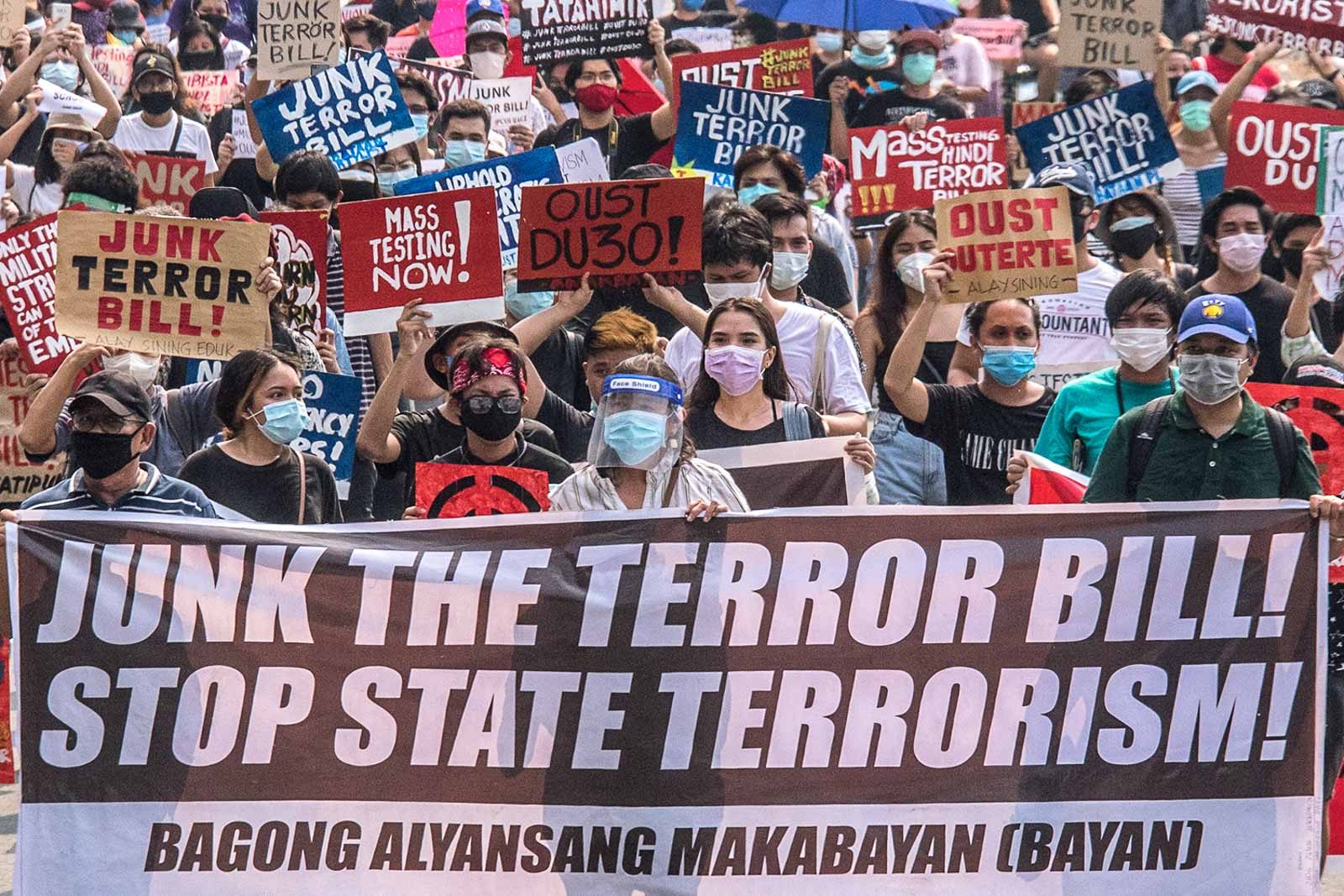 This came a day after the House of Representatives approved on 3rd and final reading the House Bill (HB) No. 6875, colloquially known as the anti-terror or anti-terrorism bill.

The passage of the bill sparked outrage among groups and concerned citizens who noted that this would institutionalize President Rodrigo Duterte’s abuse of power.

Despite the consistent online uproar calling to abolish the bill, Alliance of Concerned Teachers (ACT) representative France Castro challenged the public officials who gave it a thumbs up. (Even until now, although the anti-terrorism bill was approved on its 3rd and final reading, we call upon the public officials in the Congress to think through about their decisions because it’s obvious that the people were against it.)

An overwhelming 173 lawmakers voted in favor of the bill, while only 31 voted no. A total of 29 abstained from the vote.

She also questioned railroading of the bill after it has been certified urgent by Duterte especially at a time when the country grappled with the coronavirus pandemic.

“Sa gitna ng pandemya, ginawang urgent ang anti-terror bill imbes na solusyong medikal (In the midst of a pandemic, the anti-terror bill was made urgent instead of medical solutions),” she continued. Since it was certified urgent, it no longer needs to go through bicameral conference hearings and can be sent to Malacañang for Duterte’s signature.

(Thousands of OFWS have lost their jobs and income because of the pandemic. But the government’s response involves forcing them into prison-like quarantine facilities where a lot of them went hungry and died.) Multi-sectoral group Bagong Alyansang Makabayan (Bayan) Secretary General Renato Reyes expressed that even if the government turned a blind eye to the plea of its people, sectoral groups will continue to unite in a bid to uphold their rights.

(No one could stop the movements of the people they are trying to control. Even if we lost the support of those at the Congress and probably in the Supreme Court, we will fight on the streets. Our fate doesn’t end with their votes. This is for our rights and freedom.) Through the anti-terrorism bill, a council of top cabinet officials will be able to do functions usually reserved for the courts, such as warrantless arrests and detention of people and groups perceived to be terrorists.

(We farmers are the frontliners in the countryside, we ensure that food supply is enough during the pandemic.  We can’t imagine how the people will get by if food production stops because we have been tagged as terrorists)

Flores added that under the Duterte administration, 257 farmers have already been killed. Students of UP Los Baños marched to Agapita St. seconded this as it also held a simultaneous protest calling to junk the anti-terror bill, which threatens the freedom of student activists and critics to express dissent.

(The government used the pandemic to shutdown ABS-CBN and to kill press freedom. Just like the late dictator Ferdinand Marcos, they also want to close media outlets amplifying the government’s inadequacies.)

While the bill is packaged to strengthen systems to fight and catch terrorists, Defend UPLB, an alliance of UPB student groups warned that it could be used to stifle government critics. For Diokno, the country has longed experience acts of terrorism since 2016 such as the extra-judicial killings (EJK) and use of warantless arrest to ordinary citizens.

(It is sad that those who are pushing for the anti-terrorism bill are also those who use different ways to terrorize our nation through EJK and other measures to attack human rights.)

Diokno also expressed his support and commended the youth for their response to fight back.