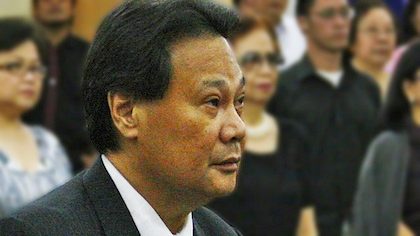 MANILA, Philippines – Before the senator-judges’ 20-3 verdict to convict Chief Justice Corona, the UP Paralegal Society released the results of the second phase of their survey on the Chief Justice’s trust ratings on Tuesday.

The first phase, conducted in February, was released halfway through the trial. The second phase was conducted last week, taking the defense’s presentation of evidence into consideration.

Relatively little changed between the two phases in terms of Corona’s trust rating and the legitimacy of his office after the impeachment.

Added to the 2nd phase of the survey were questions about the cases of the prosecution and the defense. 40.1% of respondents said the prosecution held a strong case, with 34.2% saying it was not strong and 25.7% said they had not seen that part of the trial.

“Both panels have merits on the case. The defense panel had argued their points well based on technicalities, but will this still prevail if public trust is already tainted?” posed UP Diliman university councilor, Jules Guiang, who was the head for the second phase of the survey.

The organization received flak for the first phase of its survey from Sen. Miriam Defensor Santiago, who said it was “a slap on the face” for the senator-judges and “a deliberate attempt to influence the mind of the judge.”

According to Guiang, the survey aimed to engage students in the national issue. “The Corona trial is not only a matter of those experts with the letter of the law,” Guiang said. “Ordinary citizens are merely not just spectators, we need to be part of the process.”

The Chief Justice’s Statement of Assets Liabilities and Net Worth (SALN), an often-overlooked document, was pivotal to the verdict. However, as discussed by the senator-judges in the proceedings, it may become an important document in assessing the honesty of public officials in the future. – Rappler.com