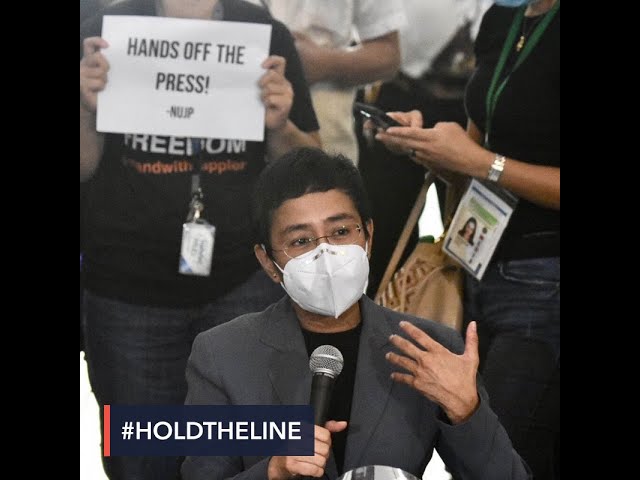 A global coalition of 78 civil society and journalism organizations on Tuesday, July 21, urged the Duterte administration to “drop all charges and cease and desist its orchestrated harassment campaign” against Rappler CEO and executive editor Maria Ressa.

The statement of the #HoldTheLine Coalition  came a day before Ressa’s scheduled arraignment at a Pasig court over a tax case that was filed against her and Rappler Holdings in November 2018.

The coalition also noted the devastating blow to media freedom and access to information caused by the earlier rejection of the franchise of broadcasting giant ABS-CBN.

#HoldTheLine coalition was formed in early July to support Ressa and help defend press freedom in the Philippines after she was convicted in a high- profile criminal cyber libel charge.

In their statement, they echoed calls made by other organizations to drop all cases against Ressa and Rappler.

At least 11 complaints, investigations, and cases have been mounted against Ressa and Rappler since 2018. The number of active cases was reduced after a Pasig trial court remanded to government prosecutors 2 cases against Ressa and other members of the Rappler Board, saying they were filed in “due haste.” A Quezon City prosecutor also dismissed a libel complaint against Ressa and reporter Rambo Talabong for lack of probable cause.

Ressa has posted bail 8 times and arrested twice. Aside from the string of cases, Ressa and Rappler have also been on the receiving end of online harassment campaigns for its critical reporting on some of the Duterte administration’s policies.

“The prosecution of baseless financial charges and cases represents an attempt to use tax law and foreign ownership regulations as another weapon to criminalize journalism and silence Ressa and Rappler as threats to press freedom and democracy escalate in the Philippines,” the statement said.

“Legal acrobatics – that’s what all these cases show. In order to charge me with tax evasion, the government reclassified Rappler as a ‘dealer in securities’ – we’re obviously a news organisation. It’s absurd!” Ressa said.

Ressa’s scheduled arraignment on Wednesday, July 22, at Pasig Regional Trial Court Branch 157 is related to one of the 5 counts of tax violation case filed against her and Rappler in the aftermath of the closure order issued by the Securities and Exchange Commission (SEC) against the company in 2018. Rappler appealed the order, prompting the Court of Appeals to remand the case to the SEC for reinvestigation.

The coalition also called on the court to conduct the proceedings on Wednesday remotely “to ensure the safety of Ressa, her legal representatives, media and court staff amid the coronavirus pandemic.”

The demand from the #HoldTheLine Coalition is echoed by the call of more than 10 thousand signatories who have so far signed a petition calling on the Philippine government to drop all cases against Ressa, her former colleague Reynaldo Santos Jr, and Rappler. – Rappler.com

Iligan: the school by the dumpster