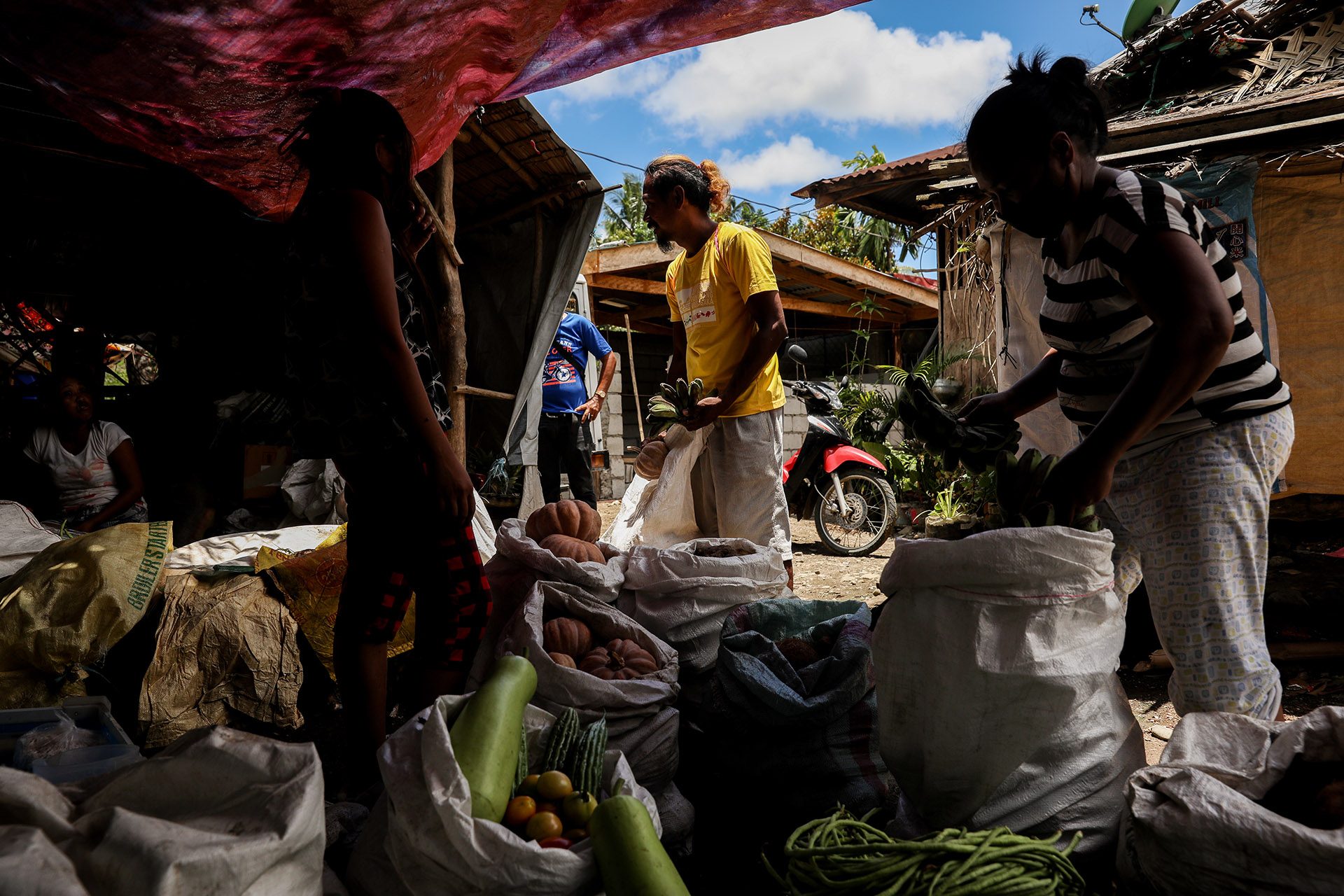 BAYANIHAN. Dumagat farmers repack harvested vegetables as they prepare to donate goods to community pantries in Manila from the province of Rizal on May 16, 2021.

Facebook Twitter Copy URL
Copied
'[W]ith this food, all of us in this country are eating as one — we’re not divided, we’re not fighting, we’re all dining at one table,' says Renato Ibañez, leader of Dumagat Remontado group SUKATAN-LN

Underneath the scorching heat of the afternoon sun, 21-year-old Joemar Pauig dug up fully-grown gabi and ube from shallow earth. Accompanied by his mother and younger brother, he then loaded the root crops onto his horse and prepared to descend from their farm atop the mountains of Daraitan, Rizal.

“Sometimes I go up here to harvest every third day, since I also have sideline jobs, like cleaning the gardens of others. We get paid by the day,” Pauig said in Filipino.

From childhood, Pauig and his fellow Dumagat Remontado, the indigenous people (IP) native to this area, were taught the ways of farming as a means of sustenance.

“Even now, farming is still what we teach and pass on to the next generation, because our land can’t be left unutilized,” said Maria Clara Dullas, president of the Kababaihang Dumagat ng Sierra Madre (KGAT), in Filipino. “We plant food so that we can make use of our land and reap our primary needs from it.”

Today, however, the community’s harvest would not only make up their lunch, but also hundreds of others’ lunches in Metro Manila.

Pauig had only recently heard of community pantries, a movement that began when Ana Patricia Non put one up along Maginhawa Street, Quezon City, over a month ago. Now, his and his family’s harvest would be packaged and brought to ten such pantries for the urban poor.

“We used to exchange goods with other communities, and received products that we did not have,” said Renato Ibañez, leader of Dumagat Remontado group SUKATAN-LN, in Filipino. “That is why we thought that if [people in Metro Manila] were able to help us with relief goods such as canned food and rice, we should be able to return the favor with goods that they don’t have.”

Their community, however, is facing their own struggles. The Tinipak River in Tanay, Rizal, home to enormous marble formations, had become a tourist attraction, along with the mountains being flocked to by hikers. What had become a new source of income, though, was hampered by pandemic restrictions.

They also had to face the onslaught of Typhoon Ulysses late last year — but through time-tested practices, the community was able to prepare. “We have visions of when the flood is about to come and how big the water is going to be,” Ibañez said. “When at noon, the water rises as if the wind is carrying it, it means a disaster is coming, and our elders advise us to evacuate.”

Furthermore, the impending construction of the Kaliwa Dam on their ancestral lands — to which they still haven’t given consent — will flood Daraitan and areas in Quezon Province, which would force their tribe and other non-IP residents to move upland. Dullas said that, according to a recent community census, there are 700 IPs among the approximately 5,000 residents of Daraitan.

“Some of our sacred places will also be submerged. We haven’t seen the actual plans, and a lot of us don’t agree with this project, but they’re always reporting that we already consented to it,” Dullas said, adding that the Indigenous People’s Rights Act (IPRA) requires any public or private project to secure free and prior informed consent (FPIC) from the IPs in affected areas.

Even as they call for awareness on this crisis from Metro Manila citizens, Dullas said these problems would not stop them from helping community pantries.

“We also want to show the government or anyone who represents them in this project: ‘Look at this food we’re getting from the areas where the dam is being built, the areas you will be flooding. This can feed a lot of families,’” Dullas said. “‘Do you want to destroy this? Or should we support the IPs further and stop this project?’”

For their part, community pantries such as the Sustainable Community Pantry in Pinagbuhatan, Pasig, are thankful for the food the Dumagat Remontado farmers have provided.

How to lead a community pantry in your barangay 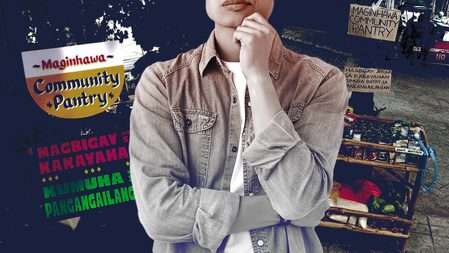 “We thank the Dumagat Remontado because they are the real symbol of bayanihan; whatever they had, even if it was just enough, they still shared it with us,” said pantry organizer Lou Mercado, in Filipino.

Prior to receiving goods from Daraitan, Mercado and his fellow volunteers had an ingenious way of stocking up the pantry, where dozens of people line up for help. They “rescue” food that is still edible, but would otherwise be disposed of the next day, from the markets in Pinagbuhatan.

Mercado said they would continue stocking the pantry so long as there is food in the market to rescue and there are people who are willing to help.

“Thank you for the help; at least we can get through each day,” said Leonora Obando, a beneficiary of Mercado’s pantry, in Filipino.

Produce from the Dumagat farmers have also reached West Crame, San Juan, home to several employees laid off from businesses in the nearby Greenhills complex. To aid their struggling neighbors, 20-year-old Joey Biteng and his fellow youth put up a pantry on a corner street, where he says up to more than a hundred line up on a normal day.

Thankful for the help, Biteng further encourages young Filipinos to do what they can for their community.

“Just push through with what you want to do in order to help; you could also ask their parents for guidance [on how to run their pantry],” Biteng said in Filipino. “My message to the government is that they must support the youth who are helping others, and not use pantries for political gain.”

Dullas and her community are happy to see their countrymen enjoy the fruits of their labor. But she hopes those who benefited from this endeavor will not let the food go to waste.

“Don’t waste any kind of food, even one crumb, because if you add [all those crumbs] up, they could still feed a lot of people,” she said. “Be thankful for the people who paved the way for community pantries, because that means there are still people who want to volunteer for their community.”

As for Ibanez, he sees these efforts as steps to solidify solidarity between the Dumagat Remontado and the city people, something that could help the nation in the long run.

“I told our fellow IP farmers: ‘With what we’re doing, we’re helping people, not just asking for their help,’” he said. “In my perspective, with this food, all of us in this country are eating as one — we’re not divided, we’re not fighting, we’re all dining at one table.”– Rappler.com

Maverick Flores is a Communications Campaigner at Greenpeace Southeast Asia-Philippines. He is an advocate for indigenous peoples’ rights and social justice, a podcaster, and an avid basketball fan.