Facebook Twitter Copy URL
Copied
The threat of the pandemic is not stopping Filipinos from helping their countrymen in need, filling the gaps of government in disaster relief and response

After Typhoon Ulysses flooded communities and damaged property in Luzon, Filipinos were quick to act even in the face of limited mobility and slow disaster response due to the unexpected deluge of rescue reports.

With the need for efficient and rapid assistance, several concerned citizens banded together and took it upon themselves to make use of what they have to help their countrymen in their time of need.

Flooded with calls for help

At the height of Typhoon Ulysses’ fury, calls for help flooded social media as affected families pleaded for rescue and relief. In parts of Marikina and Rizal, flood waters had risen to as high as the second floor of houses, leaving families stranded on rooftops.

Targetting to organize these calls for help for quicker response, Rappler’s civic engagement arm MovePH issued a call for volunteers to help track and verify pleas for rescue and relief as early as Thursday, November 12. With at least 1,000 volunteers responding to the call, MovePH amplified verified rescue reports and brought them to the attention of the Office of Civil Defense, and Red Cross Philippines, among others.

By Saturday, November 14, MovePH had monitored with the help of volunteers more than 1,600 reports for rescue and relief from Marikina, Rizal, Bulacan, Cagayan, and other parts of Luzon.

Coming together and consolidating efforts

Even with the threat of the COVID-19 pandemic, many maximized the use of social media to promote donation drives as Filipinos responded to the needs of affected communities devastated by Typhoon Ulysses.

This outpouring of initiatives in light of the successive disasters pushed various youth organizations in the country to band together and help consolidate rescue efforts, load requests, and relief drives for those heavily hit.

Formed on November 12, YouthRisePH started with 5 youth groups determined to work together to provide relief to victims. Among those who pioneered the effort were Online Sustainable Development Goals Youth Action Forum, Kids for Kids, Makesense Philippines, Black Fawn Events, and AIESEC in the Philippines. The initiative later pulled in more than 1,000 volunteers and 250 partner organizations that allowed it to organize relief efforts, connect with corporations for aid, consolidate rescue requests, and provide load to victims of recent disasters.

“Social media is a powerful tool to collate and collaborate…. I think a lot of people want to volunteer, but [are] limited right now due to the typhoon and the COVID-19 pandemic,” Mark Jacinto, one of the leads of YouthRisePH, explained.

Commissions for a cause

Others, meanwhile, used their talents and skills on social media to help affected communities.

The Filipino art community, for instance, concentrated its efforts in creating and selling art works dedicated wholly to help those affected by Typhoon Ulysses.

A collective of 9 young artists rallied together and formed Artists for #UlyssesPH to open illustration and lettering commissions that range from 300 to 700 pesos for the benefit of those affected. Interested buyers can purchase the art simply by donating the money to For The Future PH or Tulong Kabataan, and sending a screenshot via their order form at bit.ly/AFUlyssesPH.

As of 1 pm, Monday, November 16, the initiative has raised P14,877.07 for For The Future PH and Tulong Kabataan’s donation drives helping Typhoon Ulysses victims. The collective is accepting commission requests until November 20.

Young writers also made use of their art form in calling for donations for typhoon victims through Salitang Tulong, a student-organized fundraiser offering personalized 8-line poems or a compilation of poems in exchange of a donation of at least P100.

Those who would like to purchase their written works can order at: bit.ly/3lEi6WM.

Meanwhile, several artists, climate advocates, and experts came together on Tuesday, November 17, for a fundraising web program to help communities in Marikina, Camarines Sur, Cagayan, and Isabela that were affected by Typhoon Rolly and Typhoon Ulysses.

Staged by artist collective Dakila in partnership with Active Vista and We The Future PH, Bayanihan Republic Telethon sought to raise funds while also discussing climate change and governance in the Philippines.

By Wednesday, November 18, Dakila was able to collect a total of P 114,541.99 and 90 bars of soaps, 16 bars of shampoo, 5 boxes of hygiene kits, 3 boxes of canned goods, and 50 boxes of clothes from their Bayanihan Republic donation drive and telethon.

Aside from these groups, individual artists are also offering their skills to help Typhoon Ulysses victims. For those who would like to purchase their art, a netizen has compiled a thread of artists leading similar efforts:

As many of those affected by recent typhoons are facing mental distress from the aftermath of recent disasters, Innovative Youth Movement, a non-governmental organization that aspires to advocate and rejuvenate mental health among the youth, is offering free psychological first aid and psychosocial support services to those affected by Typhoon Ulysses.

The service is available for the public starting Monday, November 16. This can be requested through https://bit.ly/IYM_Karamay.

With the series of typhoons leaving victims in need of food, restaurants and food services have also mobilized to feed affected communities.

Frontliners’ Kitchen, which started out as a community kitchen for frontliners at the beginning of quarantine last March, is now working to provide meals to frontliners and communities affected by the recent disasters.

Frontliners’ Kitchen has raised over P500,000 in cash donations for its typhoon relief operations as of Monday, November 16. Donations have also been used to procure relief equipment. They are also accepting in-kind donations such as food, medicine, toiletries, and other urgent goods.

Brown’s Gourmet, which is set to close its doors in Katipunan on November 30, will use all its profits from Friday, November 13, for donating ready-to-eat food packs to typhoon victims in Rizal.

The restaurant said that Typhoon Ulysses hit close to home for them as one employee’s neighborhood in the said province has been badly affected by the typhoon. As of Friday, November 13, Brown Gourmet has prepared 108 sandwiches for distribution and will be providing rice meals for affected families in Rizal.

As of Sunday, November 15, the effort has raised more than P100,000 in cash pledges. The organizers have distributed over 500 warm meals in Marikina and 100 relief packages in Rodriguez, Rizal since then.

Filipinos have not only used social media to promote relief initiatives but also to bring attention to issues in the Philippines that were especially felt during the onslaught of recent disasters.

In the aftermath of Typhoon Ulysses, many swarmed Twitter to call for relief and media coverage in flooded areas, sparking hashtags such as #CagayanNeedsHelp and #IsabelaNeedsHelp.

Students, especially, made online campaigns calling for academic breaks to help affected communities recover from recent disasters, leading schools such as University of the Philippines to eventually heed students’ concerns.

Students from Ateneo de Manila University even led an academic strike as they called out the government for neglecting Filipinos during the recent tropical cyclones that ravaged the country.

While many applauded the bayanihan spirit of Filipino during times of crisis, the need for it in the first place points to larger gaps in government disaster response. This triggered discussions emphasizing how resilience has been repeatedly exploited as natural disasters hit the country in regularity.

“While we appreciate the bayanihan of the Filipino youth in these trying times, may we also urge our national governments and other government entities to amplify their efforts as we can only do so much,” Jacinto said. 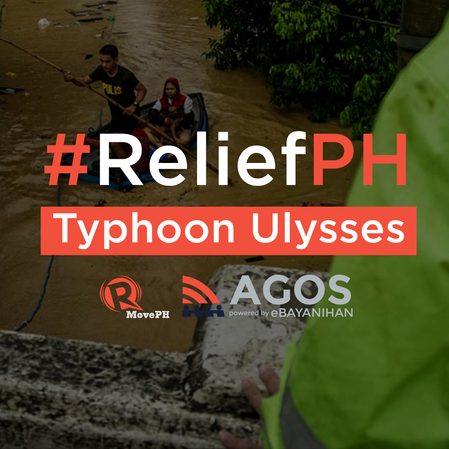 He added that while Filipino citizens can work together, they should also ensure that the government is doing its job in addressing the needs of the people before, during, and after the disaster.

Even with the influx of relief efforts, many communities still need help to recover from Ulysses. Check out this list to see where you can give aid.– with reports from Bea Sancio, Liana Apostol, Mina Mata, and Russell Ku/Rappler.com