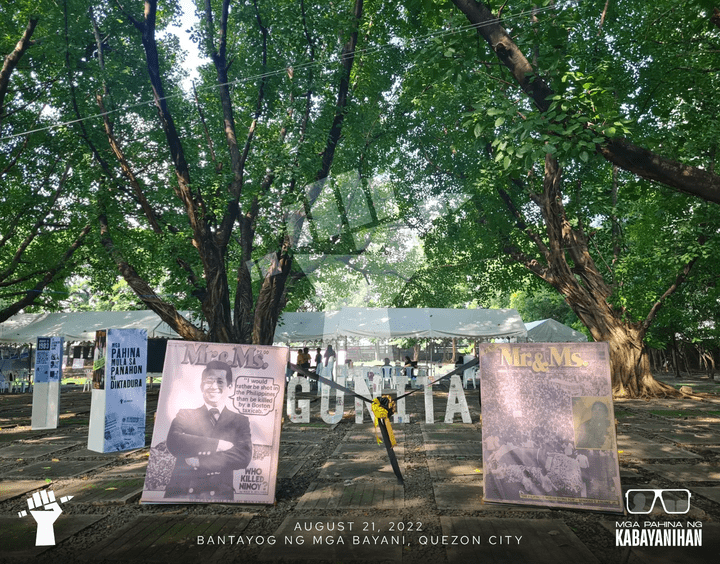 MANILA, Philippines – Project Gunita started out as a passion project between friends who wanted to digitize books, documents, magazines, and newspapers from and about the Martial Law era. The project intends to contribute to efforts in defending historical fact at a time of rampant disinformation and historical denialism.

We know that we are not the first group to do this – there have been many prior initiatives to digitally archive martial law documents and abuses. In fact, these are among the many materials that have been passed around, mostly contained in Google drives, on social media during the campaign period for the 2022 national elections.

We also know that archiving alone is not and will never be enough. We recognize the need to go beyond our echo chambers and find ways to get digital archives out of social media and make them more accessible to the public.

This is why our group sat down on July 1 to talk about more tangible projects offline. We saw how engaged people were during the kakampink campaign rallies, how these rallies were able to pull in people of all ages and walks of life and across all ideological beliefs to participate. That became our starting point for organizing a “rally” for  Martial Law survivors, giving them the stage to talk about their experiences, while providing activities for younger people to participate in.

We knew we could not do this alone, so we partnered with seven civil society organizations:

Together, we conceptualized a “history fair” with the theme “Mga Pahina ng Kabayanihan: Pagpatay kay Ninoy, Pagbangon ng Bayan,” which was later held on August 21, 2022, on the grounds of Bantayog ng mga Bayani.

August 21 commemorates two historic events: the Plaza Miranda bombing in 1971, which led to the suspension of the writ of habeas corpus and eventually the declaration of Martial Law; and the murder of Ninoy Aquino, the death that marked the beginning of the end of a well-documented abusive and kleptocratic dictatorship. The history fair was about both events and all that happened in between.

Booth partners and speakers were invited to discuss the varying aspects of the Martial Law era, from personal stories and anecdotes of survivors and surviving kin of victims, to historians and researchers discussing the life of the general populace as well as the economy of the Philippines during the Marcos dictatorship. Event sponsors included Adarna House, KolourPro Print Studio, the Ninoy & Cory Aquino Foundation, and the Saints John and Paul Educational Foundation.

Since Project Gunita aspires to both showcase the diversity of and unite the different segments of the opposition, we made sure this was reflected in all aspects of our event. Our booth participants and sponsors included nongovernmental organizations, educational organizations, progressive organizations, youth groups, people power veteran groups, and government agencies that had been fighting in different ways against the deliberate spread of disinformation and historical distortion.

The program was hosted by Dr. RJ Naguit from Akbayan, Maya Santos from Concerned Artists of the Philippines, and Nathan Figueroa from the Liberal Party.

We invited prominent figures from the different movements during the Martial Law era: from the First Quarter Storm in 1970 up to the People Power Revolution in 1986. And though the speakers came from different movements and different parts of the political spectrum, one thing was clear: they all shared one plea: Do not let the propaganda and historical denialism erase the abuses of the Martial Law era. Do not let the rewriting of our history erase the heroism of Ninoy and all those who sacrificed their lives to fight against the dictatorship and restore our democracy. Their names are inscribed on the Wall of Remembrance at the Bantayog ng mga Bayani.

Reli German, one of the founders of ATOM gave the opening message to the event, followed by video messages from Ninoy’s daughter Ballsy Aquino-Cruz (left photo below) and grandson Kiko Aquino-Dee (right). Bobby Aquino, son of Ninoy’s brother Butz, as well as former Quezon congressman Erin Tanada, also spoke at the event.

Martial law era political prisoners were given a platform to speak. Fides Lim of KAPATID, Satur Ocampo (an activist who went underground after Martial Law was imposed), and Cecilia Oebanda (known as Commander Liway) spoke on the various movements in opposition to the oppressive Marcos dictatorship prior to and even after the murder of Aquino and the experiences of those held captive by the regime for participating in these movements. In a video message, former party-list congressman Neri Colmenares expressed his support for the initiatives of Project Gunita and shared his personal experiences as a student during Martial Law who became one of the youngest political prisoners at the time. In photos above, from left: Lawyer Luke Espiritu, Cecilia “Liway” Oebanda, and Satur Ocampo.

Edita Burgos gave a snapshot of the mosquito press during the Martial Law era as she spoke of how she and her husband, the late Jose Burgos Jr., founded We Forum, an alternative newspaper that bravely countered state propaganda and exposed the abuses of the Marcoses.

Gus Lagman of NAMFREL and Light-a-Fire movement, Renato Reyes Jr. of BAYAN, and Prof. Lisa Ito-Tapang of the Concerned Artists of the Philippines recalled their personal experiences in the protests after the assassination of Ninoy from 1983 to 1986, including the confetti revolutions that were held in the Makati business district. Joey Manalang from the Cory Aquino for President movement also sent a video message.

The program was closed with a live rendition of the classic “Bayan Ko,” led by Leah Navarro,  a people power revolution veteran and representative of Manindigan Na. During Martial Law, the song was deemed subversive material by the Marcos regime. Those who were caught singing the song publicly risked being put in jail.

There are many stories that need to be told when talking about the abuses during Martial Law, and there has been a tendency for the narrative to be stuck – perhaps done deliberately by some camps – in a battle between two families: the Aquinos and the Marcoses. While we commemorated the life and death of Ninoy Aquino under the tyrannical Marcos regime in our August 21 history fair, we made sure to include the stories of many others who sacrificed their lives to fight for the democracy that we enjoy today.

Unfortunately, many of their stories have been drowned by the louder, more prolific disinformation campaign that is being pushed by those who want to twist historical facts and change the narrative for their personal gain. The objective of Project Gunita is to revive the true stories of the survivors of the Martial Law regime, magnify their voices, rage against the propaganda machine, and defend historical truth.

The history fair brought together two generations of advocates for historical truth and justice for human rights victims during the Martial Law era. It brought together differing groups in the complex Philippine political opposition spectrum. There was a shared appreciation among the older generation present for the active involvement of the youth in continuing to defend historical truth and push back against the rewriting of history.

We received messages of gratitude for continuing their fight because most of them are already in their 70s and 80s. Others have passed on. Many others who fought with them had disappeared and never resurfaced even after democracy was restored. The fight for truth and justice transcends time but never changes. We accept the passing of the torch, and we will keep its light burning for the next generations to come. – Rappler.com

The authors are two of the three co-founders of Project Gunita, an initiative to archive documents from the Martial Law Era and push back against disinformation and historical denialism. Project Gunita is a partner of #FactsFirstPH for its #SaysayNgKasaysayan campaign.