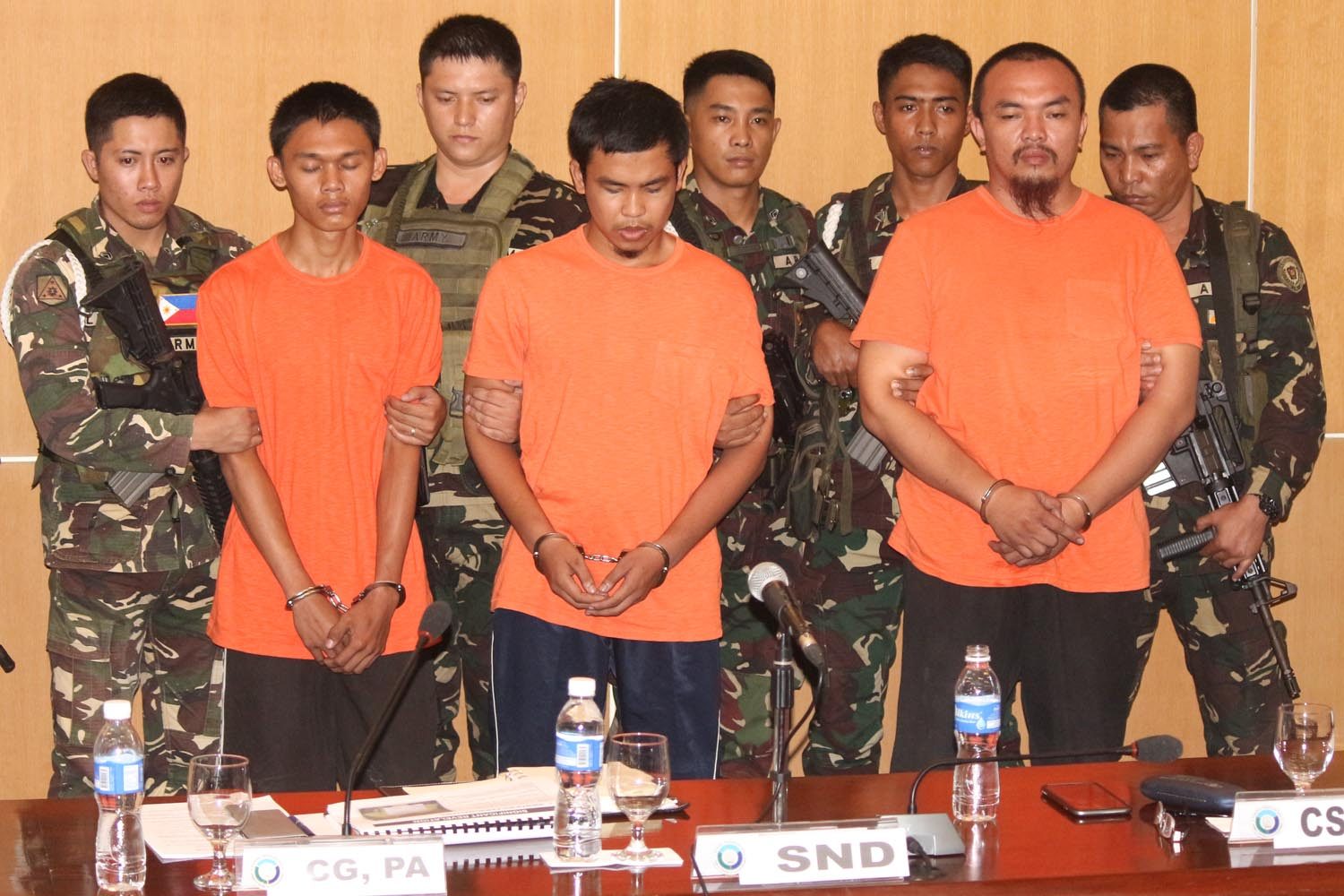 Facebook Twitter Copy URL
Copied
(2nd UPDATE) At a media briefing, Defense Secretary Delfin Lorenzana shows an actual video of the Davao City bombing retrieved from the suspects, whom he described as 'students' of the late Malaysian bombmaker Marwan

MANILA, Philippines (2nd UPDATE) – The military and the police have arrested 3 suspects in the  bombing of a night market in Davao City, Defense Secretary Delfin Lorenzana said Friday, October 7.

Lorenzana said in a news briefing in Camp Aguinaldo that the suspects – members of the Maute Group – had “direct participation” in the September 2 attack.

“We have recovered solid pieces of evidence showing that they are indeed the terrorists who bombed Davao City on September 2….The Davao bombing case is closed, ” Lorenzana said.

The defense chief said the investigation showed that the Davao blast was intended to “divert and disrupt” the government operations against the Abu Sayyaf Group in Sulu.

He said the suspects, who were presented at the end of the media briefing, were nabbed at a Cotabato City checkpoint on Tuesday, October 4, and were found with materials for improvised explosive devices (IEDs).

Lorenzana described the suspects as “students of Marwan,” referring to the late Malaysian bombmaker Zulkilfi bin Hir who was the target of a controversial police operation in Mamasapano, Maguindanao, in January 2015.

During the media briefing, Lorenzana showed an actual video of the Davao City bombing, which was taken from the suspects.

In the video, one of the suspects was heard shouting immediately after the blast: “Allahu Akbar!”

Referring to the terrorist group Islamic State (ISIS), Lorenzana said, “I think they’re trying to get the attention of ISIS.”

In fact, he said, the video aimed to get the attention of ISIS.

The Abu Sayyaf had earlier claimed responsibility for the attack, but the group later denied this.  On Friday, Lorenzana said the suspects are linked to the Abu Sayyaf.

In Davao City, Mayor Sara Duterte Carpio welcomed the capture of the suspects.

“This development is commendable as we vow to expeditiously give justice to the 15 victims who died and the 69 others who were wounded in the blast,” she said.

“It is, however, important for us to remember that the arrest must ultimately lead us to the dismantling of terror groups in our midst or result in the failure of more senseless acts of violence and extremism,” the mayor added.

The blast happened at the Roxas night market in Davao City on September 2. It killed at least 15 people and injured more than 70.

After the bombing, Duterte declared a state of national emergency “on account of lawless violence in Mindanao.”  – Rappler.com