Mar 1, 2012 8:23 PM PHT
Facebook Twitter Copy URL
Copied
If he were in the shoes of lawyer Vitaliano Aguirre II, Bar topnotcher Raoul Angelo Atadero would not have covered his ears

Is Atadero inclined to follow in the footsteps of private prosecutor Aguirre, who covered his ears while an irate Sen Miriam Defensor Santiago was speaking?

In an interview with Rappler in his Quezon City residence, Atadero said he prefers to play by the book if put in a similar situation. The Bar topnotcher referred to the lawyers’ canons, or Code of Professional Responsibility, “a set of behavior rules for lawyers.” (Watch interview clip below)

Under this Code, Rule 11.03 of Canon 11 states, “A lawyer shall abstain from scandalous, offensive, or menacing language or behavior before the courts.”

“You have to respect the court’s dignity and uphold it because, of course, our justice system depends on our respect to the courts also. So one of the reminders there is that you have to maintain grace under pressure even if a judge is being offensive or you feel that he’s being unfair or is biased against you,” Atadero said.

“You can’t fight fire with fire,” he said, amid differing comments on the issue.

The rules of respect also bind judges, however, according to the Code of Judicial Conduct.

“A judge should be patient, attentive, and courteous to lawyers, especially the inexperienced, to litigants, witnesses, and others appearing before the court. A judge should avoid unconsciously falling into the attitude of mind that the litigants are made for the courts, instead of the courts for the litigants,” says Rule 3.04 of this Code’s Canon 3.

Atadero explained that on the level of principle, respect towards judges is important because the legal profession “operates partly on hierarchy.”

Referring to judges, he said, “If you don’t maintain respect for people in those positions, how can you respect their judgment? These judgments are what we have to follow for the rule of law to be there. So if you don’t respect the person making the judgment, how can the entire system function? It will just tumble.”

“If (lawyers) don’t respect, for example, our Supreme Court or our Court of Appeals…how can you expect the people, your clients, to respect their judgment and not continue to just file cases and cases? It has to end somewhere,” he said.

The valedictorian of his Ateneo Law School batch, Atadero believes firmly in the rules of court amid criticisms of the so-called technicalities by Corona’s defense team. “This set of rules gives everybody an even playing field.”

“It’s unfortunate for the prosecution that the defense has a lot of technical objections, of course, but they can use the same objections when it’s the defense presenting the evidence,” said the topnotcher, a self-confessed “dork.”

Meanwhile, he said he prefers not to take a stand on the Corona trial, in deference to his law firm that has taken a neutral position. “We just want justice to be done,” he said. The Ateneo Law School, from which Atadero hails, has been cordial towards Corona, with the school recently unveiling a portrait of the embattled Chief Justice.

Looking forward after the release of the Bar results, Atadero said he feels challenged in his job as a lawyer. He has been at it for only a week.

In his valedictory address, Atadero said law graduates like him should personify “brilliance with integrity.” But he admitted it isn’t easy.

“A lot of people are saying, “You’re saying a lot of the idealistic things now, but when you practice in the real world, you have to (make) compromises.’ I’m not naïve enough to say that I won’t do that. But I guess, I’ll just have to keep looking back at that speech as a promise I made to myself and my batchmates, and try to live up to that,” Atadero said. 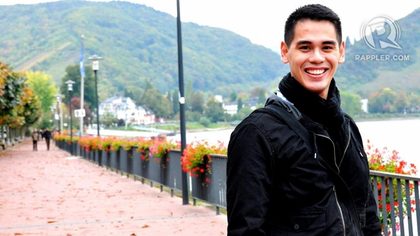 Having listed Constitution and human rights defenders among his models, the Bar topnotcher prefers to draw the line on moral issues. He vows, for example, to avoid paying bribes for traffic violations and stay away from under-the-table deals.

“There will always be a gray area, but as much as possible, if you can keep it within the bounds of law, (then) do that. While it’s your job to advocate for your client, it’s also your duty not to go beyond the law while doing so,” Atadero said. – Rappler.com