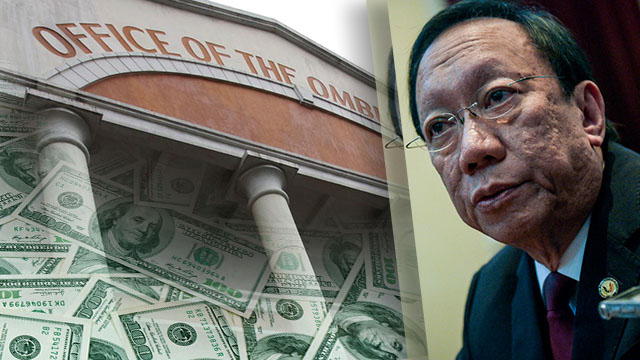 MANILA, Philippines – The Sandiganbayan dismissed a forfeiture case involving $5 million worth of bank assets owned by the late brother of former first lady Imelda Marcos, and left it to Solicitor General Jose Calida – a Marcos supporter – to pursue.

“The petition for forfeiture filed by the Office of the Ombudsman against the spouses Benjamin ‘Kokoy’ Romualdez and Juliette Gomez Romualdez is dismissed, without prejudice to its refiling by the Office of the Solicitor General (OSG),” the Sandiganbayan 4th Division said in a resolution dated June 18, but released to media only on Monday, June 25.

The petition was filed way back on August 17, 2011. The Romualdezes filed their motion to dismiss also that year, in September 2011. Seven years later, the Sandiganbayan resolved the matter only to say that the Office of the Ombudsman was the wrong petitioner.

The resolution was penned by Associate Justice Bayani Jacinto, who was appointed to the anti-graft court by President Rodrigo Duterte in May 2017.

Jacinto was assistant ombudsman before he was appointed, and before that, the legal department director of the Presidential Commission on Good Government (PCGG), the agency tasked to go after the Marcos family’s ill-gotten wealth. Jacinto had concurrences from Associate Justices Alex Quiroz and Reynaldo Cruz.

What’s the case about? It involves accounts with the Union Bank of Geneva under the names of the late Benjamin “Kokoy” Romualdez and his wife Juliette Gomez Romualdez. Kokoy was Imelda’s brother who used to be governor of Leyte and ambassador to Peking, Jeddah, and Washington DC during the term of former president Ferdinand Marcos.

Money totaling $5,193,726.37 is being held in escrow by the Philippine National Bank (PNB). The funds are part of the Marcoses’ ill-gotten wealth that the government is trying to forfeit through the PCGG. (READ: Recovering Marcos’ ill-gotten wealth: After 30 years, what?)

In June 2006, the Office of the Ombudsman found probable cause to file a forfeiture case for the bank assets. But the petition for forfeiture was filed only on August 17, 2011, during the time of Ombudsman Conchita Carpio Morales.

What’s the issue? The Romualdezes said the case was filed by the wrong petitioner.

According to Section 15 (11) of Republic Act No. 6770, the Office of the Omnudsman can initiate the recovery of ill-gotten wealth amassed after February 25, 1986. The Office of the Ombudsman was a creation of the post-Marcos 1987 Constitution.

The Romualdezes claimed that “since the subject of the petition pertains to alleged ill-gotten wealth acquired prior to February 25, 1986, the authority to file the same does not belong to the Office of the Ombudsman.”

The Ombudsman said the timeline should begin upon discovery of the ill-gotten wealth, which was in 1998.

The Romualdezes replied that even if true, the Office of the Ombudsman would not have jurisdiction over Kokoy in 1998 because he was no longer a public official at the time.

After 7 years in the mill, the Sandiganbayan agreed with the Romualdezes and said the timeline should begin from the amassing of wealth and not discovery.

“There is no room for any creative interpretation on this matter. As it stands, the present petition should be dismissed for lack of authority of the Ombudsman to file the same,” the Sandiganbayan said.

The anti-graft court did not discuss the substantial arguments, so that it does not prejudice a possible future refiling by Solicitor General Jose Calida.

The OSG has not responded to our request for comment as of posting time. Calida is pushing for OSG restructuring that would abolish the PCGG and put its ill-gotten wealth recovery functions under him.

The Senate does not appear keen on approving Calida’s restructuring, with the committees on justice (the primary committee), civil service and government reorganization, ways and means, and finance thumbing down the measure.

This is all in the backdrop of Duterte’s earlier pronouncement that he may possibly entertain a compromise deal with the Marcoses. – Rappler.com