Robredo appeals PET to use ballot images in initial recount 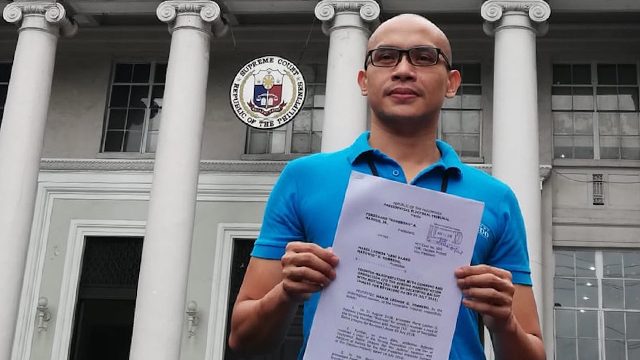 MANILA, Philippines – The camp of Vice President Leni Robredo filed a manifestation with the Supreme Court (SC) on Tuesday, August 14, appealing to continue the use of ballot images in the ongoing initial recount of votes for the electoral protest filed by former senator Ferdinand “Bongbong” Marcos Jr.

Marcos filed a motion on July 16 with the SC sitting as Presidential Electoral Tribunal (PET) to stop using decrypted ballot images in the recount, claiming they are compromised.

The PET asked the Commission on Elections (Comelec) to submit its comment to the tribunal. Though her comment was not asked for by the tribunal, Robredo still submitted a manifestation making her case for the continued use of ballot images.

What are ballot images? Once the ballot was fed to the vote counting machine or VCM, the machine captured an image of the said ballot. That became the the ballot image, stored and secured into digital cards.

The digital cards were decrypted and in December 2017, the PET gave Robredo access to the soft copies of the ballot images.

Robredo said then that access to the soft copy provided them “additional blanket of security.”

Why is Marcos against ballot images? In a press conference on January 29, Marcos presented samples of ballot images which he said were proof of fraud.

In one image, the circles next to the names of Robredo and then vice presidential candidate Antonio Trillanes IV had shades. But only Robredo’s shaded circle had an enclosing square on it. The corresponding vote summary stated Robredo got that vote.

In another image, Marcos’ circle was shaded, yet there was no enclosing square. The vote summary stated there was no vote for Marcos, because it was an “undervote.”

Marcos said this was proof that the Comelec and VCM provider Smartmatic colluded with the Robredo camp to rig the vice presidential win.

Why the square? In response to the accusation, Robredo’s lawyer Romulo Macalintal said the square was a new feature introduced for the 2016 elections.

Commission on Elections (Comelec) spokesman James Jimenez said they briefed all political parties of the new ballot features in 2016. The Marcos camp denies ever being briefed.

Comelec had set a 25% shading threshold for the ballots. If 25% of the circle was shaded, that candidate got the vote, as confirmed by the square on the ballot image.

The circle that was enclosed by the square was the counted vote, which was then reflected on the vote summary. If Robredo’s circle had the square instead of Trillanes’, it meant her circle was shaded 25%.

If Marcos’ circle did not have the square, it meant his circle was not shaded 25%.

Solicitor General Jose Calida has dropped Comelec as his government client, and sided with Marcos in his bid to apply a 50% shading threshold.

Robredo’s appeal? Robredo said Marcos has not even presented evidence to his accusation, except for his January press conference.

“Since then, Marcos has not filed any pleading, motion or submitted any evidence to the Honorable Tribunal to substantiate his allegations that the decrypted ballot images have been compromised,” Robredo said.

Robredo reminded the PET that Marcos once filed a motion for decryption, wherein he said “the printed ballot images will aid the Honorable Tribunal in the prompt disposition of his election protest.”

Robredo pointed out that when Marcos identified the pilot provinces, he said that ballot images shall be examined as well.

Robredo also cited a Supreme Court ruling which states ballot images may be used in an election protest.

“Now that the decrypted ballot images will confirm the victory of protestee Robredo and his defeat, protestant Marcos is now assailing the integrity of his own evidence. This simply cannot be allowed,” said the vice president’s manifestation.

Associate Justice Benjamin Caguioa is the member-in-charge in the electoral protest, but Marcos recently filed a motion for Caguioa’s inhibition.

“So if they are trying to cast doubt on the impartiality of Justice Caguioa, then this is actually a proof that he doesn’t fabor anyone because the use of the 50% threshold has been very unfavorable actually to the Vice President. So until now, we are still fighting for it and actually, we are still pushing that the Supreme Court would correct the wrong threshold,” said Robredo’s legal consultant Emil Marañon in a mix of English and Filipino when he was interviewed at the SC on Tuesday. – Rappler.com