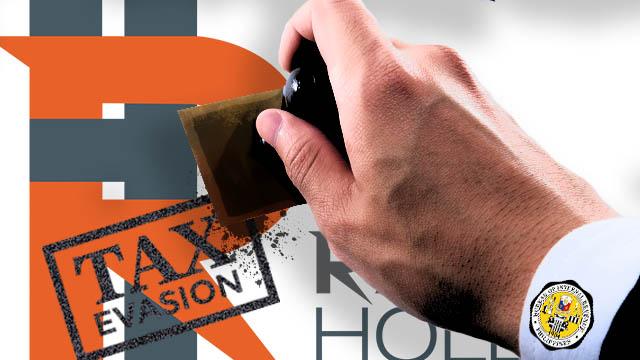 The DOJ’s statement did not indicate the subject amount of tax evasion, but it said that when Rappler issued its Philippine Depositary Receipts (PDRs), “it gained close to P162.5 million from the transaction, which it failed to declare in its tax return.”

Rappler maintains “this is a clear form of continuing intimidation and harassment” against the company and “an attempt to silence reporting that does not please the administration.” (Read Rappler’s full statement here.)

The indictment was signed October 2 by Assistant Prosecutor Zenamar Machacon Caparros. A copy of the resolution was not released to the media on Friday.

The indictment was made public on the day that Ressa received the 2018 Knight International Journalism Award (November 9, Manila time) in Washington, DC, for Rappler’s innovation and exposés on corruption despite the obstacles thrown its way.

Rappler lawyers went to the DOJ Friday morning to check on the status of the complaint and were told by the docket office of the department’s NPS that “no resolution has been forwarded to them.” Yet the DOJ statement on Friday said the resolution was signed as early as October 2, 2018.

The case stemmed from the complaint of the Bureau of Internal Revenue (BIR) filed in March, accusing RHC of failing to pay P133 million worth of taxes when it issued PDRs. A PDR is a mechanism or financial instrument which a Filipino company can use to obtain funding from foreign investors.

Securities tax expert and Rappler legal counsel Francis Lim said on Friday, “We are not at all surprised about the decision, considering the track record of how the government has treated Rappler as a result of its independent and fearless reporting on what has been transpiring in the country.”

He reiterated that “Rappler Holdings has not evaded the payment of any tax obligations in relation to its issuance of PDRs to two foreign entities in 2015.”

“Clearly, this case has no legal leg to stand on because it presumes – wrongly – that Rappler is a dealer in securities that profited from a sale. The resolution will have a chilling effect on those who have raised and will raise capital through the issuance of PDRs and is a blow to the development of our already laggard capital markets. We will pursue all legal remedies and we are optimistic that we will prevail in the end,” Lim added.

Earlier, Lim said PDRs do not amount to taxable income. Lim also said he cannot figure out how the BIR came up with the P133 million it cited in its complaint, calling the charge a “bad precedent.”

The DOJ added that Ressa’s “defense that the non-declaration of such gain was neither intentional nor willful” is “brushed aside” as it would be threshed out during trial.

“Dated October 2 as far as the ponente of the reso was concerned; the reso was reviewed further thereafter. finally approved by the acting PG and released this noon,” Guevarra said.

Guevarra added the indictment is subject to a Motion for Reconsideration (MR).

While the indictment is subject to an MR, the DOJ plans to file the charges as early as next week, according to Guevarra. “Filing the information in court is SOP upon resolution, but it does not preclude the filing of an MR and/or petition for review with the DOJ.” he said

A string of cases

A related case is the one that Rappler elevated to the Court of Appeals (CA). Rappler questioned before the CA the Securities and Exchange Commission (SEC) findings that PDRs amounted to foreign ownership and therefore warrants the revocation of the company’s license.

The Philippine Constitution requires that Philippine media be 100% Filipino-owned.

In June 2018, the CA said that Rappler should be given a curing period.

The CA also said in its ruling that “the negative foreign control found objectionable by the SEC appears to have been permanently removed” when foreign investor Omidyar donated the PDRs to Rappler’s Filipino managers.

While Rappler is appealing the part of the CA ruling that upheld the SEC in saying the PDRs amounted to foreign control, Rappler also fought this year at the DOJ a cyberlibel case. That case is still pending.

Before Vitaliano Aguirre II left the DOJ as justice secretary, he had also tasked the National Bureau of Investigation to investigate Rappler for possible violations of the anti-dummy law. – Rappler.com