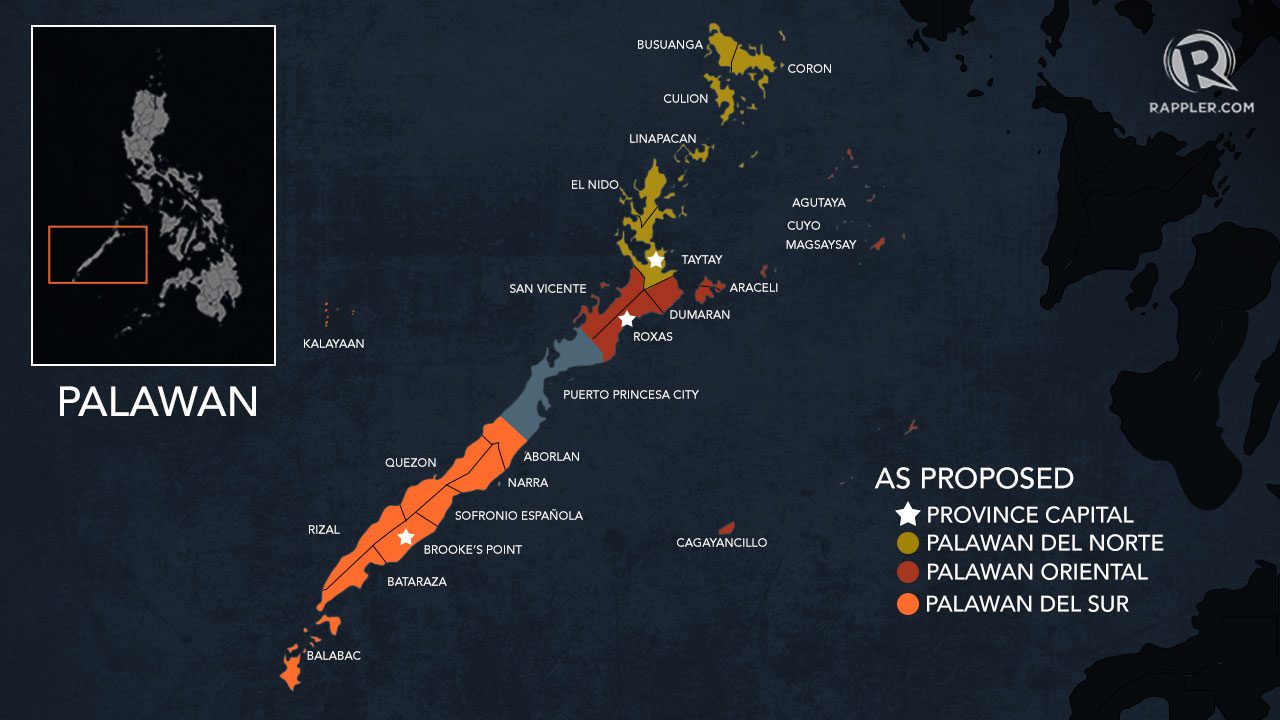 Facebook Twitter Copy URL
Copied
'If China wants a military base on Palawan, mining rights, or fishing rights, after breakup it would have multiple officials with whom it can negotiate or bribe, playing one against the other,' says Europe-based analyst Anders Corr

“China would likely welcome the breakup of Palawan, because the country sees the Philippine province as having important strategic military and resource uses,” Europe-based analyst Anders Corr told Rappler in an online interview Saturday.

Corr, an expert in China’s influence operations, said this would give leeway for China to talk with multiple local officials for possible military base expansion in the province.

“If China wants a military base on Palawan, mining rights, or fishing rights, after breakup it would have multiple officials with whom it can negotiate or bribe, playing one against the other,” Corr said.

Corr also noted that the installation of 3 governors and provincial police chiefs, in addition to the President in Manila, would serve as China’s “points of entry.”

“All these officials are potential points of failure, with the weakest link of the chain, when broken, letting in drugs, immigrants, or resource extraction from China, legal or illegal,” he added.

With China “becoming so powerful in Southeast Asia that in order to resist, democracies need to centralize, not decentralize, their power,” Corr said the Philippines needs allies like the United States and Japan.

“China already grabbed Johnson South Reef in 1988, Mischief Reef in 1995, and Scarborough Shoal in 2012. These are all outrageous actions by China that the world largely ignored because the US took no action,” he said.

He emphasized the country can’t count on “provinces that break apart and make themselves vulnerable to influence, infiltration or even takeover by a China that is increasingly made to feel welcome in Manila.”

Instead, he stressed that what Palawan needs to have its own strong defenses against China is “a single strong and democratic governor who can help mobilize the entire island in its own defense.”

“It’s an important issue. Where goes Palawan goes the world. If Palawan falls to China, the rest of us will then have to confront a stronger and more arrogant China. Giving into a bully only emboldens the bully to take more,” he added.

Corr said this island province that sits near the Western Philippine Sea “should ideally have military bases that include allied forces from the US, Japan, Australia, and New Zealand,” and “should also welcome democratic allied military bases, and fully-stocked AFP (Armed Forces of the Philippines) bases.”

“It should have a strong national guard, as states have in the US. These national guard units provide additional protection against invasion beyond national military forces,” he added.

The international conflict expert cited Japan and South Korea as examples, with both having such “tripwire” forces as protection from China and North Korea. Poland, meanwhile, offered the US $2 billion in September to deploy a permanent military base in the country – to be named “Fort Trump” – as protection against Russia.

‘Right to own guns’

To defend themselves, he suggested that Palawan citizens should be allowed to own guns.

“Citizens on Palawan should have a right to own guns to protect themselves and their families. These are basic rights enjoyed in the US, Switzerland, and in other democracies that keep our countries democratic and free,” he said.

“Palawan and other provinces in the Philippines need these strong rights and protections to keep their democracy safe.”

The bill dividing Palawan was recently approved on second reading at the Senate’s local governance committee. Once reviewed for inclusion of amendments, it will be up for third reading next week.

Oppositionists maintained that “creating 3 smaller provinces out of Palawan does not guarantee progress to each smaller unit,” as claimed by local officials who are pushing for the division.

“If the Senate’s main purpose is good legislation, they’re about to pass a bad one,” said Save Palawan Movement campaigner Cynthia Sumagaysay, referring to the bill. The group claimed that the bill is lacking in “genuine and proper public consultation” and unconstitutional for excluding Puerto Princesa City residents in the plebiscite in 2020.

Pro-division officials, however, are positive that the measure would get approved in the Senate’s final reading, and eventually be signed by President Rodrigo Duterte. – Rappler.com