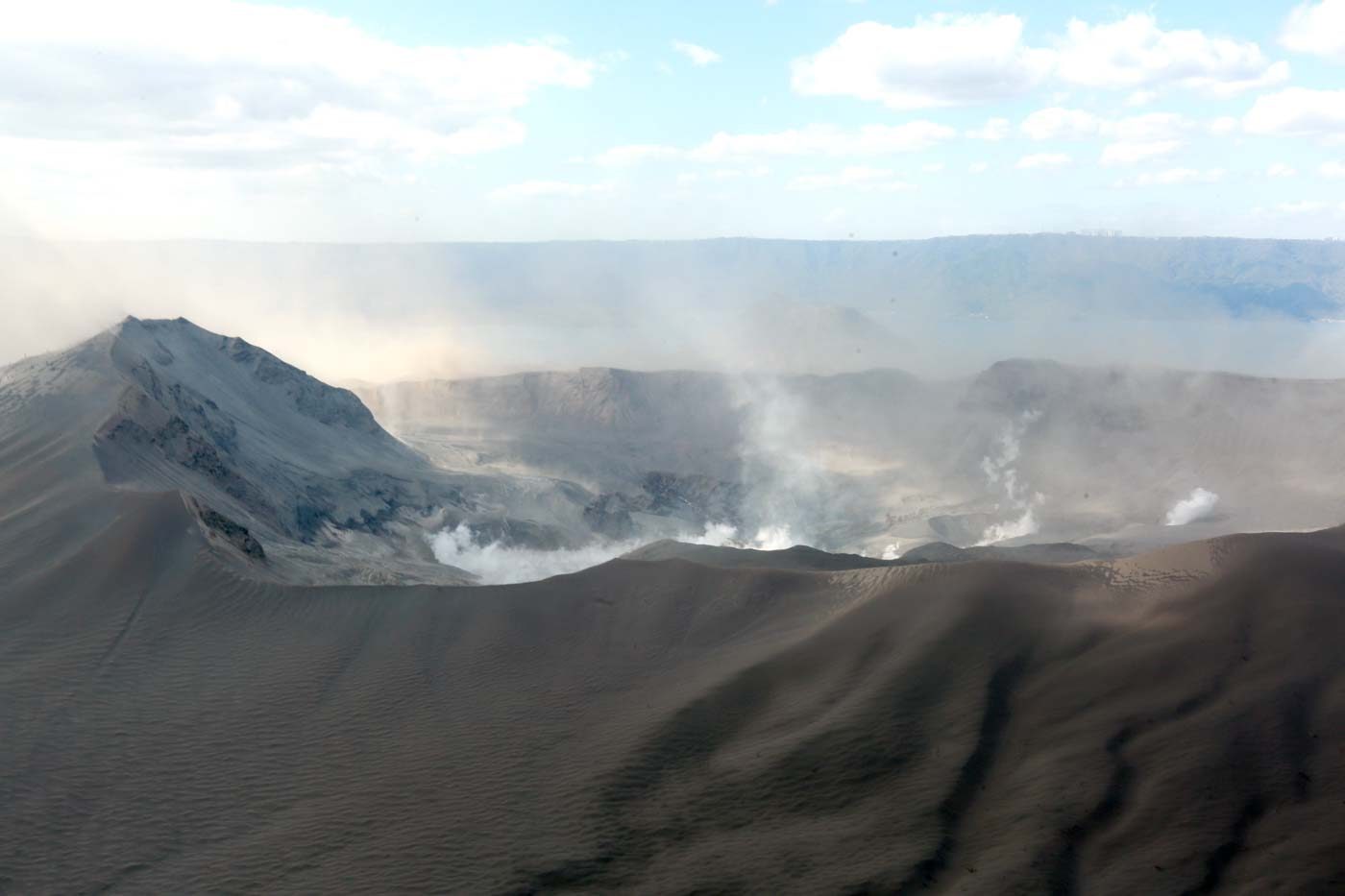 MANILA, Philippines – The Philippine Institute of Volcanology and Seismology (Phivolcs) stressed on Thursday, January 23, that Taal Volcano could still have a hazardous eruption any moment, amid reports that there is only a 30% probability of this happening.

Phivolcs Director Renato Solidum Jr confirmed that they indeed provided the 30% probability in a recent meeting with Batangas Governor Hermilando Mandanas, but emphasized that this figure is fluid since it depends on data gathered from the volcano, which changes daily or constantly.

“Actually, nung isang araw, 50-50 na nga eh. Nagbabago ‘yan (Actually, the other day, it was already 50-50. The figure changes),” Solidum said, cautioning against getting “trapped” in focusing on the percentage.

Amid the volatility, Alert Level 4 remains in effect and areas within a 14-kilometer radius from Taal are still extremely vulnerable. (READ: Taal Volcano’s 2020 eruption: What we know so far)

How does Phivolcs calculate probabilities? “We look at the monitoring parameters that we have and binibigyan namin ng weight ito…. We have experts that provide their own opinion on what the data would be showing to us. Meron din tayong reference sa mga historical data that we have…. So kino-combine namin ‘yan, at tinitignan namin maliban doon sa posibleng pagsabog, meron din kaming tinitignan [kung] ano ‘yung mga distansiya na puwedeng abutin depende doon sa lakas ng pagsabog,” Solidum said in a press briefing on Thursday morning.

(We look at the monitoring parameters that we have and we give them corresponding weight. We have experts that provide their own opinion on what the data would be showing to us. We also use historical data that we have as reference. So we combine all of those, and aside from the possible hazardous eruption, we also look at the likely distance that the hazards may reach, depending on how strong it is.)

A base surge, one of the potential hazards during an eruption, is a ring-shaped, superheated cloud of ash, rock, and gases which could travel horizontally at high speed. It would destroy or kill whatever is in its path. (WATCH: Anxious villagers plead against lockdown of areas near Taal Volcano)

So, what’s the situation now? Solidum pointed out that ever since the first few days of the eruption, magma has been moving, as indicated by the volcanic earthquakes and ground deformation such as fissures or cracks.

(Remember, magma is already there beneath the surface, and so the question is, will it proceed or will it stop rising? It can move up further, and there could be a hazardous eruption that would be dangerous for the people. It could also stop, and hopefully that’s what will happen. And if there’s fresh magma, we also have to monitor that. Volcanoes are very complex.)

Maria Antonia Bornas, chief of the Phivolcs Volcano Monitoring and Eruption Prediction Division, said they had thought last week that magma would already completely rise to the surface, hence the danger was higher.

(But now, it’s still beneath the surface and many things could happen. So now we have to monitor what will happen to the accumulated magma there.)

Phivolcs has been emphasizing that trends or patterns need to be established before the alert level can be downgraded.

“When we look at things, we have to look at what will happen in the next several days…. ‘Pag nag-a-analyze po ng volcano…kailangan mong tignan ‘yung overall, kung ano’ng proseso nangyayari sa loob ng bulkan (When you analyze a volcano, you have to look at the overall picture, at the processes happening inside the volcano),” Solidum said.

What were monitored in the past 24 hours? Phivolcs said it observed “weak to moderate emission of white steam-laden plumes 50 to 500 meters high” from the main crater.

Sulfur dioxide (SO2) emission, meanwhile, was measured at an average of 141 tons per day, generally decreasing for 3 days now. SO2 is a major gas component of magma.

Despite the decrease in SO2 emission, however, Phivolcs remains cautious since it is possible that the volcano’s vents are just blocked, preventing the gas from being released.

Like SO2, the number of volcanic earthquakes has begun to go down, but Solidum explained that the energy of these earthquakes is another factor to consider, checked through what is called “real-time seismic amplitude measurement.”

Phivolcs is using two networks to monitor the number of volcanic earthquakes – the Philippine Seismic Network which covers the whole country, and the Taal Volcano Network, which includes small earthquakes undetected by the former.

The Philippine Seismic Network has plotted 731 volcanic earthquakes since 1 pm of January 12, when the Taal unrest began. Of these, 176 were magnitudes 1.2 to 4.1 and were felt at Intensities I to V.

From 5 am on Wednesday, January 22, until 5 am on Thursday, there were 6 volcanic earthquakes plotted at magnitudes 1.5 to 3.4, with no felt event.

The Taal Volcano Network, meanwhile, recorded 467 volcanic earthquakes – including 8 low-frequency earthquakes – just in the past 24 hours.

If a hazardous eruption occurs, Alert Level 5 – the highest – would be raised. This may or may not happen, leading to an agonizing wait for tens of thousands of families whose homes and livelihood are hanging in the balance. (READ: TIMELINE: Taal Volcano eruptions since 1572) – Rappler.com