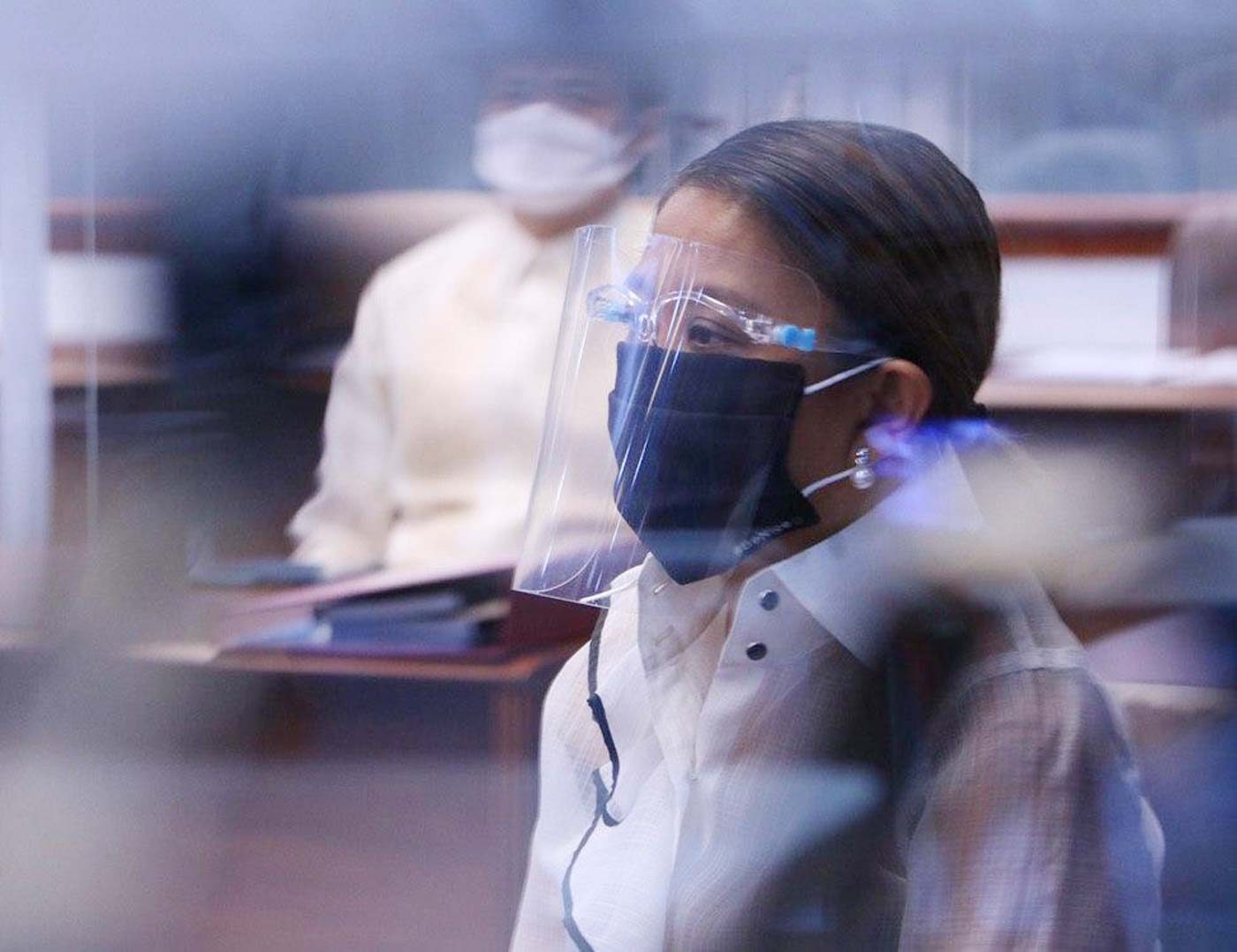 Senator Nancy Binay attends the opening of the second regular session of the 18th Congress. Plastic barriers were installed at the session hall while social distancing and safety precautions were observed as part of the new normal. Photo by the office of Senator Nancy Binay

Facebook Twitter Copy URL
Copied
‘The conversation will shift towards death again when there’s so much death already happening around us,’ says Senator Nancy Binay

The country’s justice system is flawed, she said. Besides, taking up President Rodrigo Duterte’s proposal to bring back capital punishment would all the more put death on people’s minds when their focus should be on surviving the health and economic crisis.

“We need to talk about paano tayo mabubuhay (how we will survive) and by discussing death penalty, kamatayan pa rin ba ‘yung kailangan pag-uusapan (does death still need to be the subject)?” Binay told CNN Philippines in an interview on Thursday, July 30.

“I am against the death penalty. Unless maayos natin ‘yung justice system natin, kawawa ‘yung mahihirap (Unless we fix our justice system, the poor are disadvantaged). They can’t afford the best lawyers,” the senator said.

Senators in favor of capital punishment took their cue from Duterte’s State of the Nation Address (SONA) on Monday, July 27. The President urged Congress to bring back the death penalty by lethal injection for illegal drug offenders.

Senate President Vicente Sotto III said on Tuesday, July 28, that reinstating the death penalty is unlikely to hurdle the Senate in the current session, when the pandemic response and economic recovery should be the lawmaking priority. However, it would have a better chance if its application is limited to “high-level drug traffickers.”

On Wednesday, July 29, Senator Ronald “Bato” dela Rosa, the former police chief who launched Duterte’s war on drugs, urged the other senators to at least deliberate on the proposal.

At the end of the day’s session, Senator Sherwin Gatchalian gave his justice and human rights committee seat to Dela Rosa, making him eligible to sponsor the measure and vote to elevate it to the plenary.

Ten bills to reinstate capital punishment are pending at the Senate. Some of them, including Dela Rosa’s and Sotto’s, only target illegal drug traffickers.

Critics of capital punishment say it is anti-poor because wealthy suspects are able to hire the best lawyers to wiggle them out of death row. When the death penalty was in force in the country from 1993 to 2006, most executed convicts were poor. With a faulty justice system, critics worry that the state may end up executing the wrong suspects.

Critics also question whether the death penalty actually deters crime. Dela Rosa claimed he had firsthand accounts from “drug lords” that it does.

Capital punishment is worthy of a long debate, Sotto told Dela Rosa on Wednesday. Opposition Senator Francis Pangilinan pointed out it would distract the Senate from drafting laws addressing the pandemic.

‘We have it the other way around’

Binay said she found the government’s pandemic response lacked a “sense of urgency.” She cited how Vietnam was able to evacuate 80,000 tourists from the city of Danang after 3 residents contracted COVID-19.

“Their approach is very proactive, but us, we don’t have that sense of urgency…you don’t feel that need to do something on how we can fight this problem,” she added.

The senator also disagreed with further opening the economy and allowing more businesses to resume even as coronavirus case numbers continue to rise.

Also on Wednesday, COVID-19 cases in the Philippines breached 85,000. The Department of Health reported 1,874 new cases, bringing the total to 85,486. Sixteen new fatalities brought the total death toll to 1,962.

Binay said the country’s case numbers are alarming, and noted how other places like Hong Kong tightened restrictions according to their case numbers, as well as whenever there were spikes in new cases.

(But with us, it’s the other way around. Just when our cases keep going up, we keep further opening our economy.)

The President’s SONA was “too general” and left much to be desired, the senator said.

(For instance, for us legislators, what does he specifically want us to do, to pass, that will help give solutions to our problems related to COVID-19?) – Rappler.com