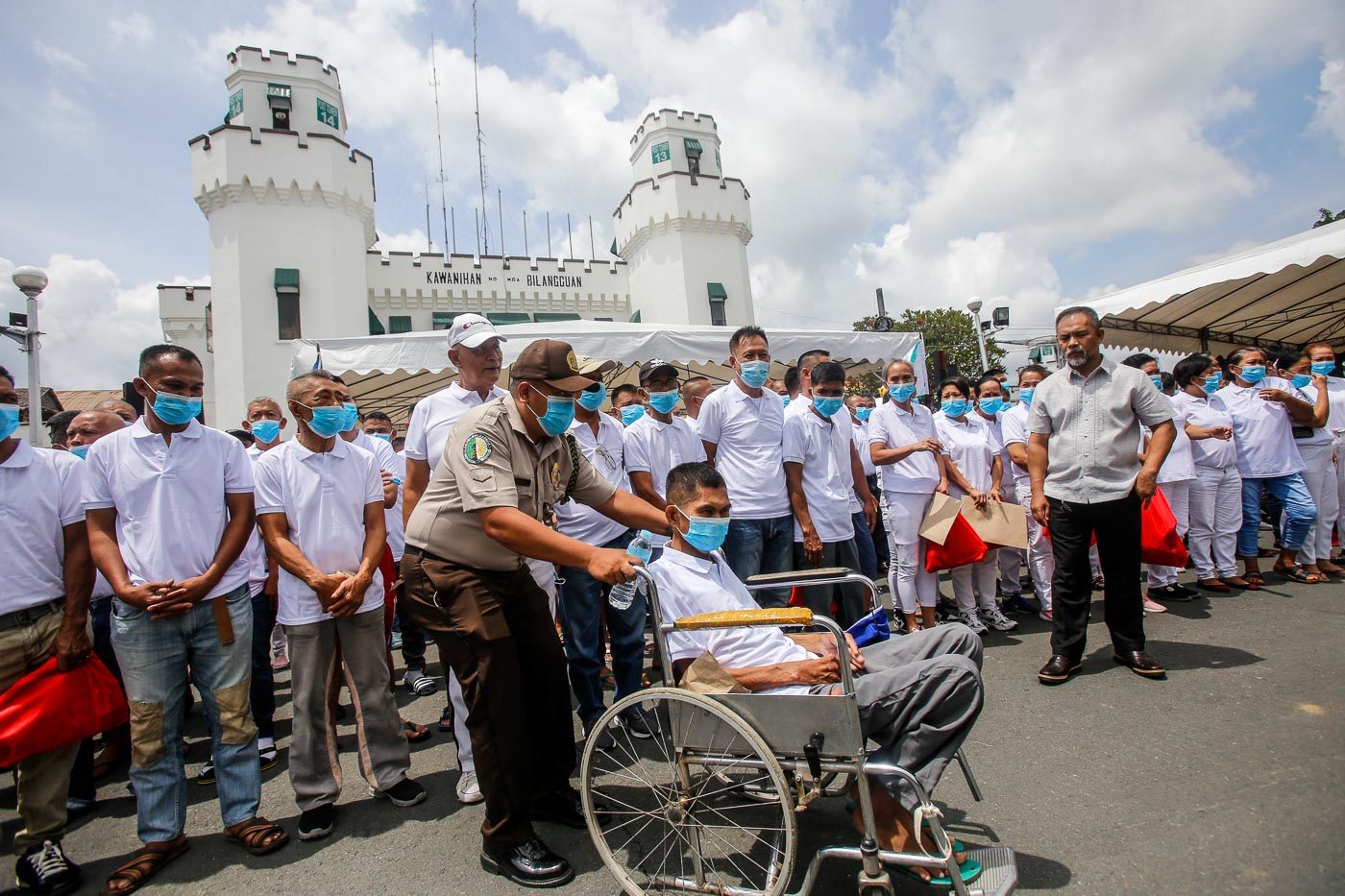 RELEASED. About 371 Persons Deprieved of Liberty were released at the National Bilibid Prison after they were given parole and commutation of sentence, in Muntinlupa City on September 13, 2022.

Facebook Twitter Copy URL
Copied
In terms of mode of release, of the 371 persons deprived of liberty freed, 240 attained their maximum sentence, 98 were granted paroles, 31 were acquitted, while two were from probation

MANILA, Philippines – The Bureau of Corrections (BuCor) on Tuesday, September 13, released 371 persons deprived of liberty (PDLs) from the New Bilibid Prison (NBP) and other corrections facilities in the country.

As part of the Department of Justice’s (DOJ) plans to decongest prisons, the agency teamed up with its attached agencies, BuCor and the Public Attorney’s Office (PAO), to release the PDLs under different conditions, including Good Conduct Time Allowance (GCTA).

“The 371 released were a result of the Department’s and BuCor’s computation with the help of PAO’s lawyers,” DOJ spokesperson Mico Clavano told reporters. “Sec. [Jesus Crispin] Remulla, PAO Chief [Persida] Acosta, and DG [Gerald] Bantag all collaborated to make this possible.”

Based on the data from the BuCor, 191 PDLs were released from the NBP, 37 from the Correctional Institution for Women (CIW) based in Mandaluyong, and 143 from the BuCor’s operating prisons and penal farms (OPPF). For PDLs from senior citizens group, 28 are from NBP, four from CIW, and 13 from OPPF.

In terms of mode of release, of the 371 PDLs freed, 240 attained their maximum sentence, 98 were granted paroles, 31 were acquitted, while two were from probation. According to BuCor director general Undersecretary Bantag, this was the largest number of PDLs released under his term.

Taguiam said the gratuity allowance is fixed at P500 for each PDL, while the transportation allowance will depend on the PDL’s address. For prisoners who are from other regions, the BuCor will provide plane tickets, according to Taguiam.

For PDLs who have no families, they will be turned over to their local government units under the local social welfare and development office, the BuCor PIO chief added.

The congestion rate for all jails in the country is at 403% in 2020, based on the Commission on Audit’s report.

During the event, Justice Secretary Remulla said he is relying on the PAO to check with the BuCor and the Bureau of Jail Management and Penology to look for prisoners who have reached their maximum sentence.

Remulla added that they plan to release more prisoners in October, November, and December this year. In a separate interview with reporters, the DOJ secretary said they want to release at least 3,000 PDLs from the NBP, and then an additional 2,000 per year in all jail facilities in the country.

The DOJ secretary added that they are looking into the bail system since there are other accused who are under detention even if they are allowed to post bail.

(One of the things that we are looking into is the availability of bail for everyone since there are a lot of accused who cannot post bail, and who could be temporarily freed and deal with their cases from the confines of their loved ones.) The release of PDLs coincided with the birthday of President Ferdinand Marcos Jr. Earlier, the DOJ announced that it will submit 300 names of PDLs as possible beneficiaries of executive clemency on September 13 – in time for the President’s birthday.

However, the PDLs released from the NBP are different from the names submitted by the justice department. Remulla explained: “Meron pa, meron pang iba. Ito, ano ito, GCTA ito saka other releases (We have more, we have more to submit. This is for the GCTA and other releases).” – Rappler.com