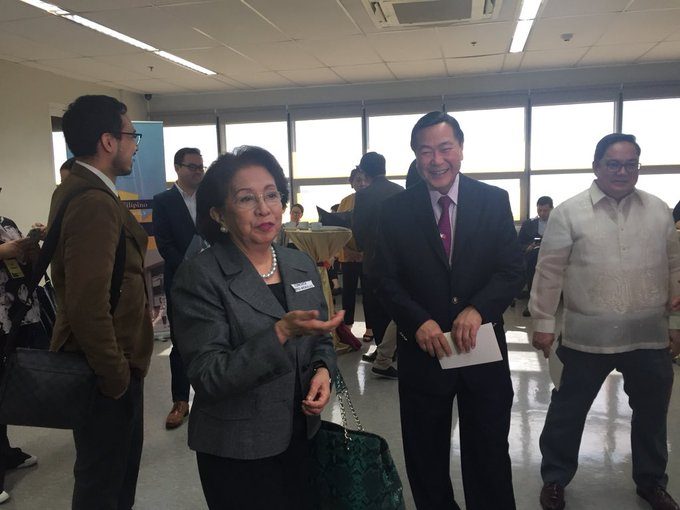 CARPIOS. Former SC justices Antonio Carpio and Conchita Carpio-Morales prepare to speak at a forum at the UP BGC on the West Philippine Sea in November 2018.

Facebook Twitter Copy URL
Copied
'In its fight against terrorism, the government must not be the source of terror and impunity itself. We must never let reason continue to escape us,' says former Ombudsman Conchita Carpio Morales

Retired and no longer part of the Duterte goverment, the Carpio judicial powerhouse returned to the Supreme Court, this time as petitioners seeking to strike down the highly-contested anti-terror law.

The Carpio cousins sent their petition electronically because the Supreme Court is still closed due to disinfection operations. They chose Wednesday as they stood firm that the law took effect on July 22, and not July 18, as the administration claimed.

The anti-terror law was published in print on July 6, but published online July 3, stirring debates on whether online publication is a valid mode to start the 15-day countdown to the law’s effectivity. (WATCH: The dangers of the Anti-Terrorism Law)

Carpio and Morales are joined in the petition by University of the Philippines (UP) College of Law Professors Jay Batongbacal, Dan Gatmaytan, Ted Te, Victoria Loanzon and Anthony Charlemagne Yu.

The 86-page petition requests the Supreme Court to conduct oral arguments, and immediately issue a Temporary Restraining Order (TRO) to stop the implementation of the law.

It asks to declare null and void the entire anti-terror law.

In a statement, Morales said: “In its fight against terrorism, the government must not be the source of terror and impunity itself. We must never let reason continue to escape us.”

The petition calls the law “unconstitutional as written,” and lists examples by which the petitioners themselves can be classified as suspected terrorists under the vague definitions of the law.

The petition said Carpio, a staunch advocate of the country’s territorial claim against China of the West Philippine Sea, “may be prosecuted for Inciting to Commit Terrorism.”

“Carpio Morales is likewise in danger of being accused of terrorist acts or support thereof, such as ‘extensive interference’ into ‘critical infrastructure’ that is meant to ‘destabilize fundamental political structures’ under Section 4(c) of the Anti-Terror Act, as she has recently filed a disruptive International Criminal Complaint complaint against Chinese President Xi Jinping,” said the petition.

“The definitions of terrorism and its variants are so hopelessly burdened by unconstitutionality. As they deserve to be expunged, the Anti Terror Act will be left with nothing to sustain its existence,” said the petition.

The petition warns that the law makes it possible for suspects to be arrested and re-arrested on an endless cycle.

The contested Section 29 allows the Anti-Terror Council (ATC) to authorize warrantless arrests, and warrantless detentions for up to 24 days. (READ: EXPLAINER: Comparing dangers in old law and anti-terror bill)

“On the 25th day, the ATC may order the re-arrest of the designated individual or member of an organization that remains designated/proscribed as a terrorist since the designation or proscription order is still valid,” said the petition.

“Thus, Sections 25 and 26 permit 24-day cycles of arrest and re-arrest on the basis of a standing administrative designation order by the ATC or proscription order by the Court of Appeals,” said the petition.

The petition also said that the designation power of the council under Section 25 is dangerous because the law does not provide “any mode of appeal or judicial recourse from the designation order.”

Without a warrant from a court, the petition said this amounts to violations of Sections 2 and 3 of the Bill of Rights, which protects the rights to privacy and against unreasonable searches.

Not a valid ground for warrantless arrest

Sponsors of the law have justified warrantless arrest provisions by saying that the Rules of Court allows it anyway on 3 grounds:

Here’s how the petition explained that – if the person is arrested without warrant under the Rules of Court, it means the person was caught in the act or had just committed a crime. As such, it wouldn’t take much for law enforcers to file the charge in court, which is why the Revised Penal Code only has a maximum 36-hour limit to bring to court people without warrant.

The anti-terror law, on the other hand, allows as long as 24 days before the person is brought to court.

The petition also said that Section 29 delegates to the ATC a power that belongs only to the President.

In the martial law provision of the Constitution, the President can suspend the privilege of the writ of habeas corpus, meaning that those suspected of rebellion or invasion can be arrested without warrants. But that provision said the suspect must be brought to court in 3 days otherwise he must be released.

“What is more egregious is that such authority of the Anti Terror Council surpasses that of the President in terms of the duration of the detention and applicable restrictions,” said the petition.

If not the entire law, the petition wants to declare unconstitutional 20 provisions of the law, including the provisions on house arrest (Section 34), and provisional declaration of terrorists within as short as 72 hours without a single hearing (Section 27). – Rappler.com